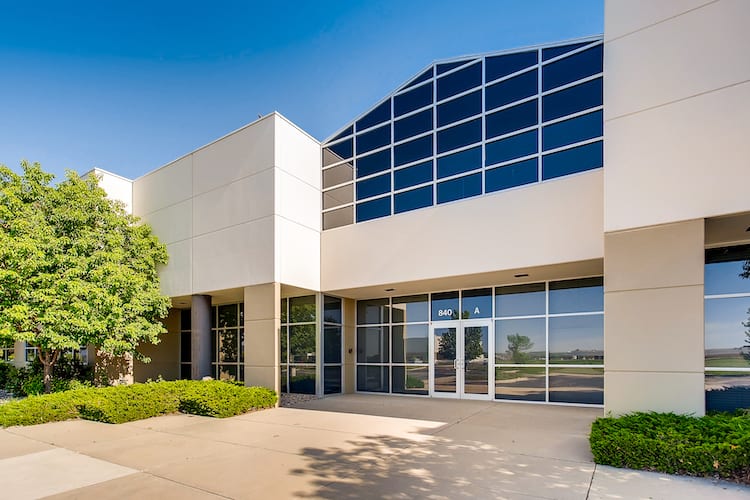 Bold Renewables will move from Fort Collins to the building at 840 Diamond Valley Parkway in Windsor.

Bold Renewables, an Advanced Energy carve-out that services and maintains solar central inverters, signed a seven-year lease for 23,215 sf at 840 Diamond Valley Parkway. Vestas Wind Systems also is a tenant in the building.

Bold Renewables, now in two locations in Fort Collins, will move all operations into the building, including its corporate offices, diagnostic lab, and parts and equipment warehouse. The company is the exclusive original equipment manufacturer for AE central inverter parts and services.

“The first priority was to keep our corporate location as close as possible to where we are now” for the employees’ sake, said Bold Renewables President Brenda Clarke. Given the tight market in Northern Colorado, “The place in Windsor was one of the few places that had both the office and warehouse available,” she said. Bold Renewables will move into the new space within the next month or two.

“This move will allow Bold Renewables to better serve their customers and increase their business,” Palieri said.

“Windsor’s central location among the population centers of Northern Colorado and its proximity to Interstate 25 have made it the site of rapid urban growth, particularly on the western edge of town as it grows toward the I-25 interchange,” said Eyer. “Additionally, in the last two decades, the town of Windsor has seen significant industrial development on the southeast side of town.”

Built in 2003, 840 Diamond Valley Parkway features grade-level and dock-high loading, along with 20-foot clear height. It has one 27,685-sf space available for lease. CBRE is marketing the available space and also has the building listed for sale for $8.1 million, or $130 per sf.

The 45-acre Diamond Valley Tech Center is located just east of Highway 257, between Weld County Road 68 to the north and Eastman Park Drive to the south.