RidgeGate turns attention to development east of I-25 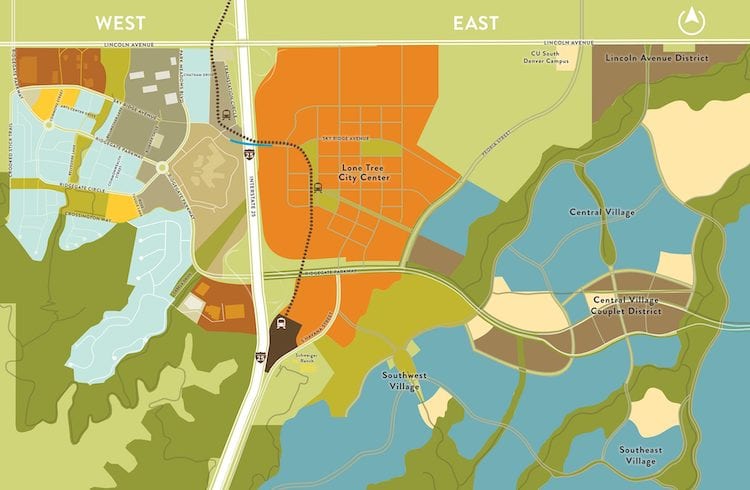 After nearly two decades of nonstop development on the west side of Interstate 25, RidgeGate is turning its attention to the east.

Starting in 2020, RidgeGate will begin development of what ultimately will be three new residential villages and two mixed-use districts set among more than 1,000 acres of parks, trails and open space. 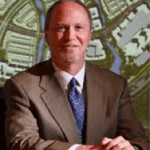 “We are looking for placemaking and thoughtful urban design to be a hallmark of the continued development on the east side of I-25. This means creating diversity and walkability with mixed-use districts, and vibrancy with parks and plazas for outdoor movies, farmers’ markets and other community events,” said Keith Simon, executive vice president and director of development for Coventry Development, master developer of the Lone Tree community.

“RidgeGate east will follow the same deliberate, environmentally sensitive approach as RidgeGate did on the west side,” he said.

“We’ve just never stopped since then. There’s actually been continuous construction of one type or another since then on the west side, and still today. Even during the down cycle of 2009 and 2010, there’s always been some kind of construction going on at RidgeGate,” said Simon.

Kiewit is expected to close on a site for its regional headquarters in the West Village this summer, leaving only 19 acres, or two available sites – one for medical use and another that is seeing considerable activity from retail/entertainment users.

“We’re all really proud of how the West Village came together. It’s a nice balance of residential and employment, and there’s some nice civic amenities … There are a couple of nice retail centers with lots of dining choices for people, a very walkable community. We have a broad range of residential choices for people, including senior housing, and everything from apartments to $1 ½ million homes,” Simon commented.

The East Village will span 4 square miles of land – twice as many as the West Village. At build-out, that part of the community –  served by two light-rail stations opening next month – will include up to 10,000 homes and 12 million sf of office, retail and hospital/medical space. The first residents will move into the community, likely to take three or more decades to complete, in 2021.

Work to accommodate RidgeGate’s growth will begin within the next 30 days with expansion of RidgeGate Parkway from I-25 to the community’s far eastern boundary. The road will have three lanes in each direction plus a separated, 12-foot bikeway. Halfway across the property, the road will split into two one-way roadways to make room for, and easy accessibility to, a grocery-anchored retail development to serve the new retail villages.

The first of three residential villages to get underway will be the Southwest Village, the village closest to the RidgeGate Parkway light-rail station. Coventry Development is working with a master homebuilder for the entire village, which would include about 1,800 homes with a broad range of product types and price points.

Also early on will be a high-density, mixed-use transit-oriented development around the RidgeGate Parkway Station. The 30-acre development will include a condominium development and the first of several affordable housing projects.

Future TOD development will include the Lone Tree City Center, a 400-acre urban core of the eastside development that will serve as Lone Tree’s new “downtown.”

Between the two new light-rail stations and the existing Sky Ridge station in the West Village, “There is about 500 acres of land that’s now going to be walkable to these three stations, which is quite impressive. That usually doesn’t happen,” said Simon.