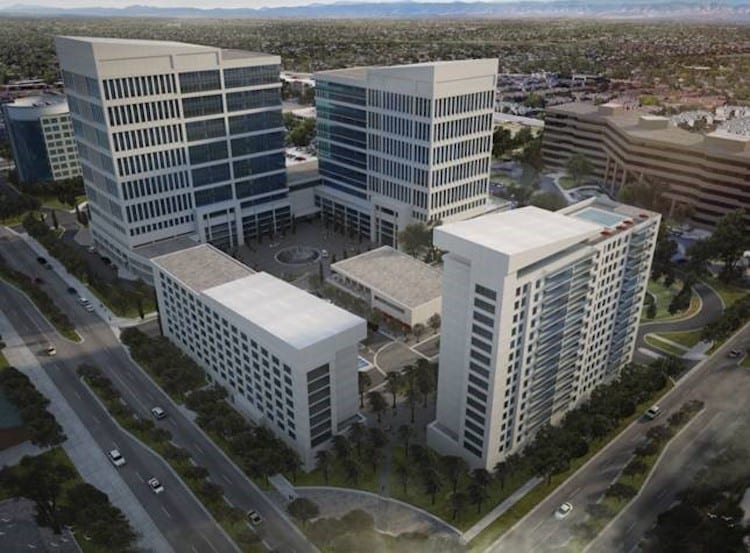 Preliminary plans for the site at 6363 Greenwood Plaza Blvd. call for two high-rise office buildings with a mix of retail and residential uses.

Schnitzer West has acquired a site across the street from Fiddler’s Green Amphitheatre that is entitled for more than 1 million square feet of development.

Peakview Place, a 10.9-acre parcel at 6363 Greenwood Plaza Blvd. in Centennial, was one of two properties Schnitzer West purchased in an off-market deal. The price wasn’t released, but it was recorded at $20.25 million, or $42.57 per sf. Schnitzer West also bought 115 Inverness, a 55,706-sf office building in Englewood.

Both properties are within walking distance of light-rail stations.

Schnitzer West plans to develop a Class A mixed-use commercial development on the Centennial site starting in January. Preliminary plans include two high-rise office buildings with a mix of retail and residential. The company said it is assembling a team of “best-in-class” consultants to work on the project, which is in design.

Nearby amenities, in addition to Fiddler’s Green, include restaurants and retail, and Village Center Station.

The property is one of the last larger sites in the Greenwood Village area, according to Mike Kboudi, a land broker with Cushman & Wakefield, who was not involved in the transaction.

Located a couple of miles southwest of Peakview Place, 115 Inverness is a three-story office building near the Dry Creek light-rail station. It is 59 percent leased.

As part of its investment in the property, Schnitzer West will manage, renovate and address deferred maintenance at the property, as well as improve amenities. Those will include an on-site conference facility and locker rooms.

“We remain positive on the growth in the region given its convenient public transportation hubs, highly educated workforce and ample supply of residential housing. We are excited to add these properties to our existing portfolio and to increase the availability of first-class office space in the area to meet tenant demand.”

Inverness Gateway LLC, also affiliated with Silagi Development, sold the office building at 115 Inverness for $5.75 million, or $103.22 per sf, according to Arapahoe County records.

With the acquisition of Peakview Place and 115 Inverness, Schnitzer West now owns and/or manages approximately 1.5 million sf of office space and adds to its regional development pipeline of more than 1.2 million sf in the Denver metro area.