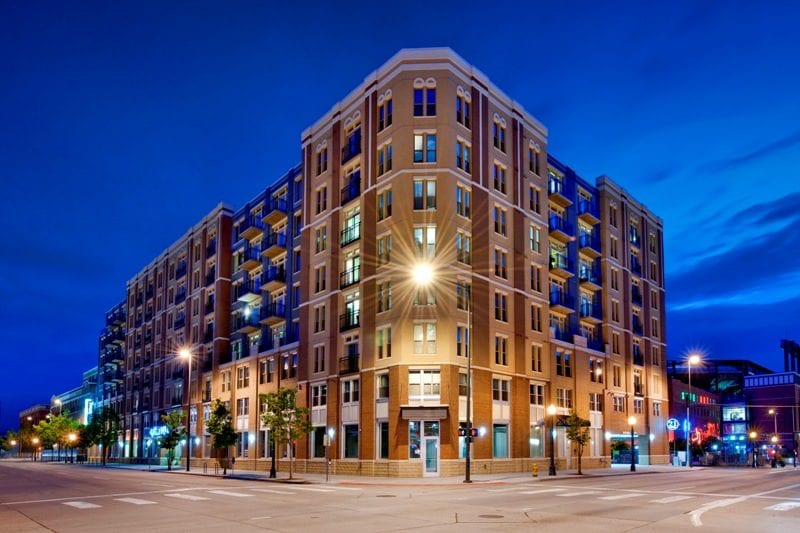 Simpson is a big player in the LoDo/Ballpark areas of downtown by investing $144 million in two prized apartment communities.

As part of the same transaction, Simpson also paid $62 million, or $378,048.78 per unit, for the 164-unit Battery on Blake Street building that incorporates the former Piggly Wiggly warehouse at 22nd and Market streets into the rental community.

The seller was the Phoenix-based Alliance Residential Group.

That building includes a bowling alley.

“We are excited about our expansion in the Denver market and are eager to extend our excellence in customer service to our residents,” said Sharon O’Connell, a senior regional vice president at the Simpson Property Group.

“At TwentyOne|01 and The Battery on Blake Street, residents can experience extraordinary living, while having an array of conveniences and urban experiences within walking distance,” O’Connell said.

“We look forward to contributing to and being part of the Ballpark neighborhood,” she added.

Terrance Hunt, part of the ARA team that represented Alliance in the sale, expects that Simpson will spend about $10,000 per unit on the building, basically a block from Coors Field.

“What is interesting is that the Piggly Wiggly site is a true-value add property and the other one is a brand-new, turnkey development,” Hunt said.

A number of potential buyers wanted to buy each of them, but Alliance wanted to sell them as a package.

“That made it a little more challenging,” Hunt said, as there are some potential buyers who only acquire value-add properties and others that only buy brand new buildings.

“Alliance operated both buildings independently of each other,” Hunt said.

Simpson, however, can achieve economies of scale by operating together, creating a critical mass of 390 units.

If you look it at that way, then 58 percent of them are value-add units, he noted.

Value-add properties are the most sought after in the market, because the rate of return from the improvements typically greatly exceeds the return from the purchase price.

Despite the challenges, give the communities are so different, Simpson faced a lot of competitors.

“We probably gave 30 tours” during the sales process, Hunt said.

While many will say these communities are in the Ballpark neighborhood, given their proximity to Coors Field, Hunt said he thinks they are really in the heart of LoDo.

“If you look between 22nd and Speer, other than something like the mixed-use Sugar Building and the 16M building, there is not a lot of rental housing available,” he said.

“There really is no other concentration of multifamily on the major streets of Blake, Market and Larimer.”

“It really is true loft living,” Hunt said. “You really can’t find theses kind of loft rental units, unless you are renting a loft unit from a private owner.”

But that is a moving target.

“And when you look at the price of ground on Blake Street, that (value) is something which is really hard to quantify” given there is so little supply, he said.

The Battery on Blake Street is at six-story building at 2120 Blake St.

Amenities at Battery on n Blake include:

The neighborhood has a walk score of 91.

TwentyOne|01 and The Battery on Blake Street are the 12th and 13th apartment communities Simpson owns in the metro area.

This fall, Simpson Housing will open the SkyHouse Denver high-rise at the upper end of downtown Denver.