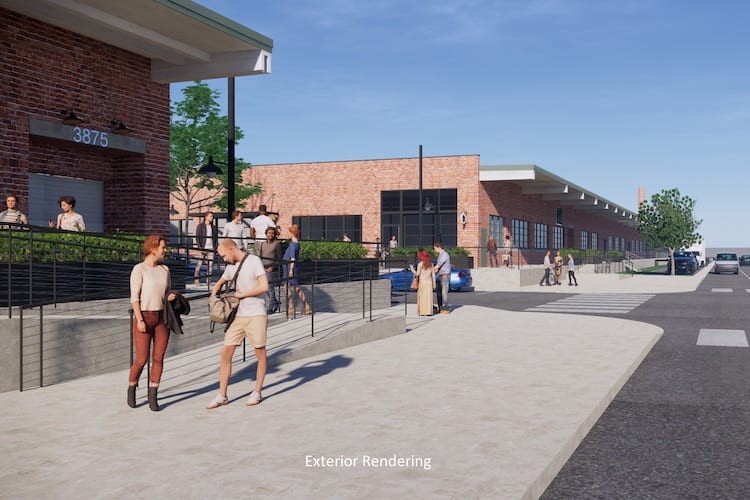 The property at 3800 Steel will provide urban industrial and creative office space.

A pair of brick-and-timber buildings that were part of a World War II medical supply depot will be revived as inner-urban industrial and creative office space.

ScanlanKemperBard, in a joint venture with Harbert Management Corp., purchased 3800 Steele, which includes 482,700 square feet of warehouse space on approximately 35 acres stretching from Steele to York streets. The sellers, Ken Wolf and Ari Stutz of Wolf/ Stutz Investments, will retain a minority interest in the property, which sold in an off-market deal for $77.6 million.

“We really like the idea of providing a home for inner-urban industrial users that are getting displaced by all the growth in RiNo,” said SKB Executive Vice President Richard Morean. “Beyond that, because these are neat, old, edgy buildings with great exposed ceilings – and we have parking – we will definitely attract creative office users as well as the target audience,” he said.

Targeted industrial users include “new generation” light-industrial, creative manufacturing and urban flex tenants. “There are already a few tenants that Ken and Ari have put in place that prove the concept that these types of interesting light-industrial users like that environment and want to come there,” Morean said.

The National Western Complex, Central I-70 project and River North Art District expansion toward the northeast put 3800 Steele in the path of growth, said Morean. “When we fell in love with the deal and started talking to debt and equity to line up the capital, I would say that, pretty quickly, the capital markets got it, and they understood the project. They understood the value of the location,” he said.

The new owners will invest approximately $47 million to reposition the property, located in the Clayton neighborhood, as collaborative, multitenant space. Capital improvements will include restoration of the historic facades and the addition of new amenities such as conference rooms, kitchens, showers, locker rooms, bike parking, centralized tenant lounges and collaborative breakout areas. There also will be signage to improve visibility.

The property is a few blocks east of Denver Rock Drill, a large, new mixed-use development, and midway between the 38th and Blake and 40th and Colorado commuter rail stations. “If this property were located contiguous to, or a block away from, a rail stop, somebody would buy this and tear it down to make way for new apartments,” Morean said. The 39th Avenue Greenway the city of Denver is building on the north side of the buildings will provide bike and pedestrian access to Franklin Street on the west, so, “You could literally get to RiNo in three minutes on a bike, probably seven minutes on foot,” he said.

“We believe the access to green space, in tandem with the ability to host scalable events on campus, creates an unparalleled opportunity to engage with tenants and the local community in Clayton,” Morean said.

“The neighbors call the old military-installed barbed wire fence that surrounds the property the Impenetrable Wall of Doom,” commented Stutz. “We are looking forward to removing that barrier and restoring connections to both our project and the new 39th Avenue Greenway.”

The warehouses were built in 1942 as part of the Denver Medical Depot, designed by noted architect Temple Hoyne Buell. After the war, they served various public purposes and, in 1998, they were converted to an industrial/ office park.

“We are confident that our acquisition and retrofit of the 3800 Steele project will be well-suited for both innerurban industrial and creative office users alike,” said Morean. “The project’s 18-foot clear, exposed timber ceilings, historic facades and above average parking availability will be well-received by the market. This is a great next step for SKB Cos. in the Denver market as we continue to grow our real estate portfolio.”

SKB, a Portland, Oregon based real estate merchant banking firm, has completed similar projects on the West Coast, including Westgate Center in San Leandro, California, and the Iron Fireman Collective in Portland. The company, founded in 1993, has originated total portfolio activity of $4.47 billion, including equity invested of $1.58 billion, comprised of 29.3 million sf of office, industrial and retail space and 2,154 residential units.