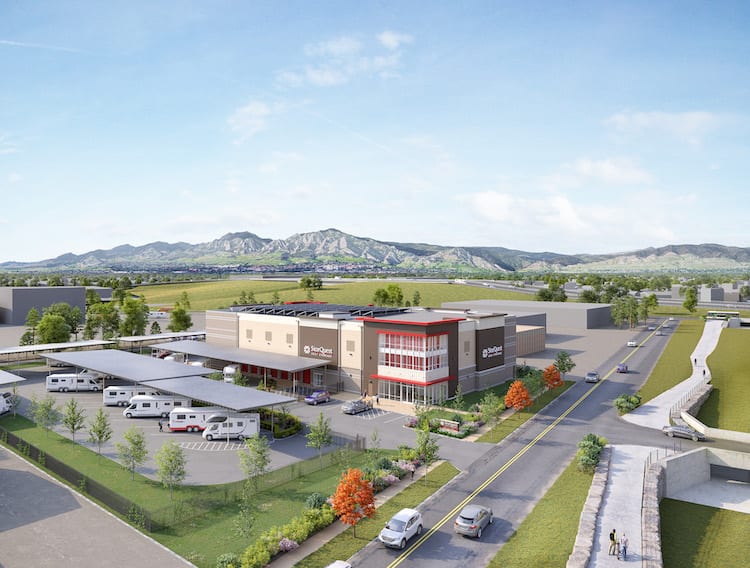 The StorQuest off Foothills Parkway at Pearl Street will include approximately 650 self-storage units and 55 RV spaces.

A national developer of upper-end self-storage facilities will enter the Boulder market with one of its nicest projects to date.

“It’s a beautiful building,” said Jon Suddarth, vice president-real estate for The William Warren Group Inc., developer of StorQuest Self Storage facilities. “We build some of the best in class – this will be one of our nicest projects.”

The StorQuest will be developed starting this summer at the former Marv’s Quality Towing property at Pearl Street and Foothills Parkway. “It will include approximately 650 climate-controlled self storage units, plus 55 covered RV units.

“The visibility should be excellent right off of Foothills and Pearl,” said Suddarth, adding the location is strategic for Boulder. “It’s a half-mile, if that, from Google’s new campus, Boulder Junction, and all the new technology companies and apartments that are being built in that section of Boulder,” he said.

The 2.7-acre site at 4790 Pearl St. recently sold for $4.85 million. Designed by Galloway & Co. and being built by Waner Construction, the self-storage facility is slated for completion by early summer 2020, just in time for the student rush.

In addition to significant landscaping, there will be glazing throughout and rooftop solar panels, a city requirement Suddarth said the company is glad to accommodate and has done with most of its new developments in the Denver area. “It’s environmentally responsible, and on top of that it makes sense financially,” he said.

The StorQuest will be three stories, with some drive-up units, including ones that are climate-controlled. It also will be smaller than the typical StorQuest at about 59,000 gross square feet, as opposed to the 100,000- to 120,000-sf facilities The William Warren Group typically builds. RV storage, while limited, is something that was included because it is in high demand in Boulder, according to Suddarth.

“This will be best in class,” he said. “It will be the closest self-storage to the University of Colorado and downtown Boulder. We’re super excited about it.”