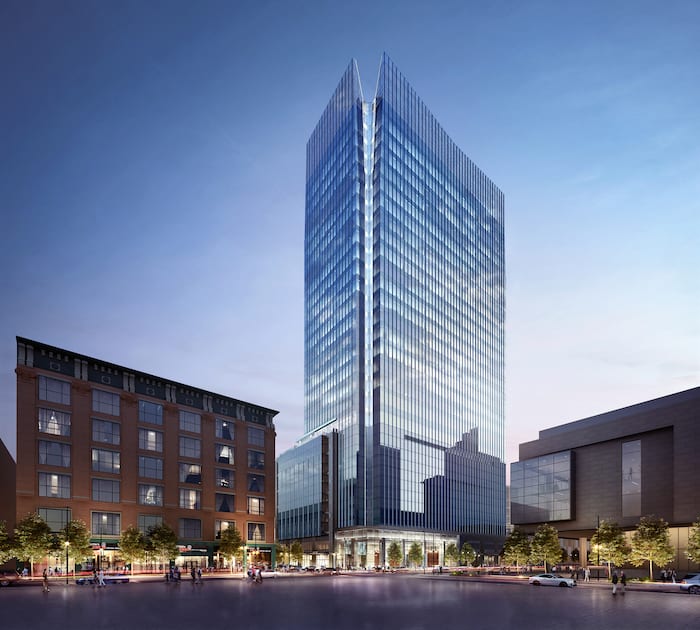 The 30-story Class A office building will include 20 floors of office space; the façade will comprise an all-glass curtain-wall system.

Block 162 is a joint venture led by Patrinely Group and USAA Real Estate.

“We are proud to announce this significant milestone of Block 162 and applaud our team for their dedication and ability to keep our delivery on schedule given some very challenging circumstances,” said Robert Fields, president and CEO of Patrinely Group. “We are long-term believers in the Denver market, and have confidence in the strength and continual appeal of Denver as a top-notch business environment and an aspirational destination for individuals and companies.”

The 30-story Class A office building will include 20 floors of office space on levels 11-30. The façade will comprise an all-glass curtain-wall system, and the column-free design includes an average floor plate size of 29,800 rentable sf.

“All office floors feature 10-foot clear floor-to-ceiling glass for unparalleled views of Denver and the Front Range of the Rocky Mountains,” Scasserra said. “The way the building is notched along the corners is also more than just an expression of the building’s form. These exposed edges are another means of allowing additional natural light to penetrate into the building. Near the top of the tower, they unfold outwards, adding a soaring quality to the building – which evokes the natural peaks and high alpine ridges which are the iconic signature of Denver’s surrounding natural landscape.”

Asked what challenges must be overcome when building a nearly 30,000-sf floor plate that is devoid of interior columns, Swinerton Project Executive Chad Holajter said, “The main challenge we faced with the removal of interior columns is the upgrades that were required to the concrete core of the building.

“To be able to remove all of the interior columns, the structural beams needed to span from those exterior columns to the concrete core structure,” Holajter continued. “This involved the placement of substantial steel embeds at each level of the core to allow a place for the structural beams to weld to.” Once the project partners became aware of the challenges that would occur at the core, “We all decided that a self-climbing concrete core system would be the solution,” Holajter said. This steel system allowed for consistent layout of the embeds, rebar and other core penetrations that could be used over and over, versus having to layout and rebuild the core for each floor. “The core system was a driver of schedule and quality on the project but has now allowed for very open and spacious floor plans.”

The office building will feature an 11th-floor amenity area dedicated exclusively to the building’s tenants, with a fitness center, social lounge and conference and meeting space. These interior amenity spaces will provide direct access to the building’s sky terrace also on the 11th floor, which will be a manicured outdoor roof garden and include a dedicated exercise lawn as well as seating areas and fire pits. The fitness center features expansive operable glass walls that open onto the exercise lawn, along with an indoor section complete with stretching areas, cardio stations, free weights, and men’s and women’s locker rooms with private showers. “One of my favorite design elements is the amenity deck and sky terrace located on the 11th floor,” Scasserra said. “The design was created around the idea of giving tenants a direct indoor/ outdoor connection. It is a direct reflection of the Denver lifestyle and features terraces with lounge seating, indoor fireplaces, outdoor fire pits, and a catering bar and bodega.” Tenants can enjoy a high-end hospitality influenced space with panoramic views, he said. A fully operable NanaWall system allows for 40-foot-wide openings in three different locations to maximize the connection to the outdoors.

“Block 162 is one of the only new speculative office high-rises to be constructed in Denver’s central business district since the 1980s,” Scasserra continued. “Our challenge as designers was to not only create the next tier of office building for Denver, but to ensure it would fit within the existing urban fabric.”

Early in the conceptual design process, the Gensler team took inspirations from the multitude of natural influences in and around Denver to create massing schemes reflective of forms and movement found in the mountain peaks, rock layers, tree skin, and the Great Plains that reach eastward.

“Ultimately, we chose a concept that incorporated a subtle faceted crown and corners to create mountain-like slopes, plinths and vistas that would engage with the sky,” said Scasserra. “These faceted elements allow the building expression to transform and capture the natural quality of Denver through its changing lights and color. This architectural theme of angles and peaks characterizes the ceiling and columns of the main lobby as well, which engages with the surrounding urban environment through its expanse of glass, creating an activated street environment.”

The project will be certified LEED Gold. Construction of Block 162 is slated for completion in December, with first occupancy for tenants available as early as January.