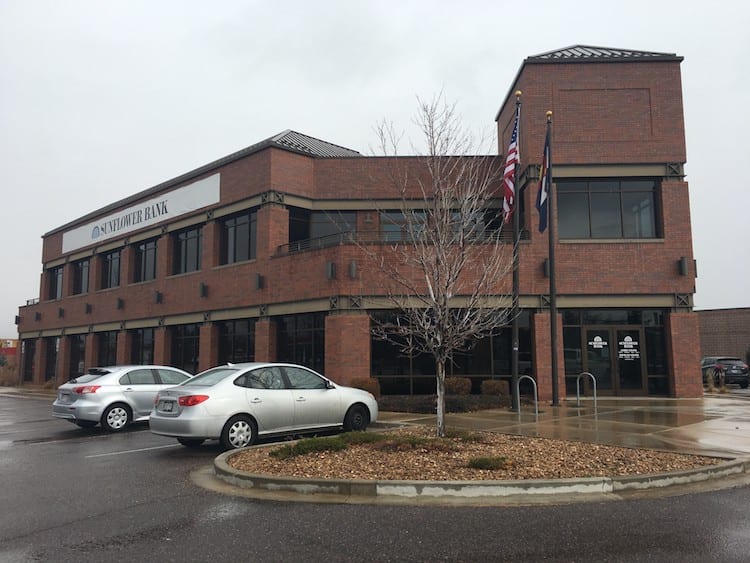 An affiliate of Boulder-based Tebo Properties bought the building at 1726 Hover St. in Longmont.

A Boulder investor purchased a highly visible former bank building in Longmont for $2.3 million, or $127.95 per square foot.

The former First National Bank/Sunflower Bank building at 1726 Hover St. was vacant at the time of the sale. The two-story, 17,976-sf building became available following the merger a year ago of First National with Sunflower Bank, which has a Longmont branch on East Ken Pratt Boulevard.

Sunflower Bank sold the property to EAT-1813 LLC, an affiliate of Tebo Properties.

Stephen Tebo of Tebo Properties said his company plans to offer the building for lease, ideally to another financial institution. The building also could be divided for more than one tenant.

Located at Hover and 17th Avenue, the property received a lot of attention – both from potential buyers and community members who were simply curious about the property’s status – because of its visibility, according to Amy Aldridge of Tributary Real Estate, who represented the seller with Tributary’s Andy Cullen and Jona Behm.

“I was fielding calls up until a few days before we closed on it. A lot of people called thinking it was an investment property,” she said, adding many buyers weren’t interested once they learned the building was vacant.

Tebo, on the other hand, saw the vacancy as an opportunity.

“It was, we felt, a valueadd play because it’s totally vacant. We bought it substantially below replacement cost,” he said.

The building is next to a Starbucks, across the street from the Safeway-anchored Centennial Square Shopping Center and within walking distance of numerous other amenities.

“It’s a Class A building in a Class A location,” Tebo commented.

The building was constructed in 2005.