When The Source opened in an 1880s foundry on Brighton Boulevard in 2013, Zeppelin Development started looking at development opportunities for the 2-acre lot adjacent to the buzzed-about food hall. After considering possible office or residential uses, the team settled on a hotel.

But The Source Hotel is not your usual hotel.

“It’s not just about warehousing people,” says Kyle Zeppelin, president of Zeppelin Development. “It’s the opposite of a single-purpose hotel project.”

The concept was always about complementing The Source, not replicating it.

“The idea is you’ve got all these different layers coming together,” notes Zeppelin Development Partner Justin Croft. “The thought is this place is for more than just the people staying here.” 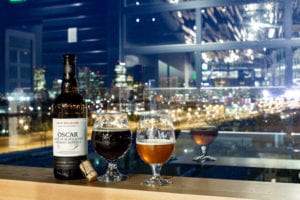 That ethos starts in the street-level lobby with brewing tanks for Fort Collins-based New Belgium Brewing Co. The Woods, the restaurant and bar on the top floor, operated by the hotel, will serve New Belgium beer. (The Source Hotel is one of the first hotels in the country with a brewery on site.)

The second floor is the 20,000-square-foot market hall that opened in August, a bookend to the original Source that’s anchored by restaurants Smok (barbecue) and Safta (modern Israeli), Station 16 Gallery, and other retailers in big open bays and unique kiosks made by Housefish, a Denver-based custom furniture manufacturer.

A 200-person event venue overlooks the brewing tanks off the lobby and an 800-square-foot mural by noted L.A. street artist Cleon Peterson. The treed garden courtyard separating the two buildings serves as water detention and a green element. 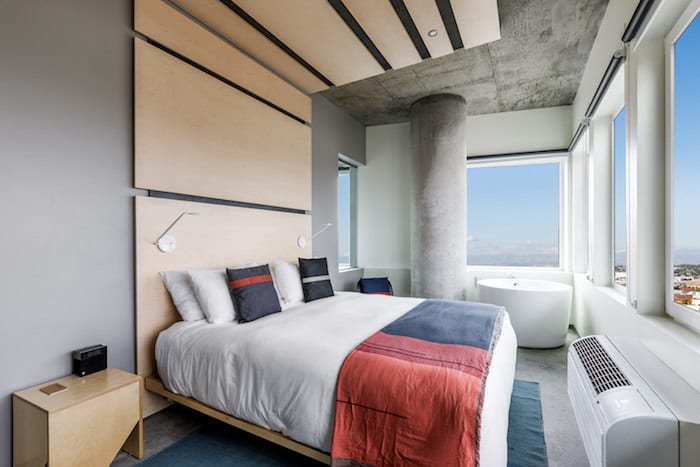 On the third through seventh floors are the guest rooms, with 100 queens, kings and suites in all, that started welcoming guests this month. Interior design takes cues from Scandinavia and Japan, with light wood, exposed concrete and a sleek, uncluttered feel punctuated by intermittent splashes of color. Two recurring elements: Structural concrete columns are exposed throughout the building, and garage doors open to the outdoors on the second floor and some rooms.

Zeppelin says the vision involves playing off of the existing urban fabric while filling a need. “It is the only high-rise in the neighborhood,” he explains, but it remains relative to the existing scale as “medium-sized buildings stacked on top of each other … That series of stacked boxes with corrugated metal is relating to the industrial past without trying to replicate it.”

Zeppelin credits Stephen Dynia of Dynia Architects, who has designed all of Zeppelin Development’s projects in RiNo.

“Stephen Dynia has consistently nailed these ideas,” he says. “Everything is commercially successful and highly critically acclaimed.”

The feelings are mutual. 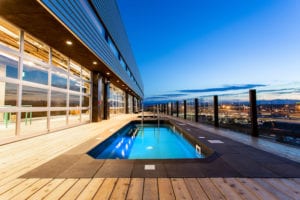 “We work well together because we share ideas about the built environment,” offers Dynia. “We endeavor to make architecture that is unique to each individual program and site – to create a culture within, and to integrate each building into the fabric of the neighborhood and the city.”

Dynia says he wanted the hotel’s design to play off the authenticity of The Source, but also be authentic for its own time and place.

“Let the old Source be what it is, because it’s such a beautiful building of that era,” he says of the decision to not build the hotel as an expansion. “They’re in an odd way very different, but they speak the same language.”

The major parallels between the old and new building is the functionality and modernity of each in its own era.

“The thing we avoided is superficial connections, like, ‘One building is brick, the other should be brick’,” says Dynia. “An early decision was to make an entirely concrete frame which allowed for the shifting form and pronounced cantilever at the top floor, and the intimate expression of structure, such as exposed concrete columns in the guest rooms.”

Because of that choice, construction “had its challenges,” says Dynia. “It’s not a Holiday Inn rectangular box with stucco on it.”

As Zeppelin puts it, “You have post-industrial character that has a creative edge to it, but people don’t want to stay in a warehouse.” A hotel requires “a higher level of refinement.”

Thornton-based Alliance Construction Solutions took on the tricky task of a hotel with a lot of exposed concrete. Crews knocked down and repoured a few columns along the way if they weren’t perfect the first time.

“There has to be a lot of oversight on concrete when it’s exposed,” says Dynia. “It was a major design effort and the construction was challenging to get the building to look like we wanted it to be.”

Echoes Zeppelin: “We ended up in a good place. It wasn’t always easy to get there, but the outcome is great.”

Despite the fact that it looms over adjacent buildings, the hotel’s form replicates the scale of the neighborhood. “When we started working in RiNo, it was all low-rise, industrial buildings,” says Dynia. “We shifted the floors. The result of that is it appears to be some low-rise buildings piled up on each other. It has this expressed horizontality by appearing to be boxes stacked on top of each other.”

There’s another wrinkle: “The building is not rectangular – it’s a subtle parallelogram,” he notes, and that makes for better views. “You’ve got the mountains and the city. The building is rotated on the site slightly so the east side gets some views of the city.”

The color scheme relates to the surroundings as well. “The silver is seen throughout an industrial area,” says Dynia. “Black is a counterpoint to the silver.” Inside, he adds, “That integrity of raw concrete is very sumptuously contrasted with the Scandinavian look throughout the building. There are areas of light blond wood in the rooms and the public spaces that serve specifically as a means of warming up the rather Brutalist materials that are the raw building structure.”

The street-level lobby is subtle by design.

“The entrance to the hotel, we wanted a very understated way of getting into the building,” says Dynia. “It’s not the big event of the building.”

That would be the market hall. “You can get a beer while you check in, and then you go up the stairway to what is the major event,” he says. “Going upstairs is pretty exceptional.”