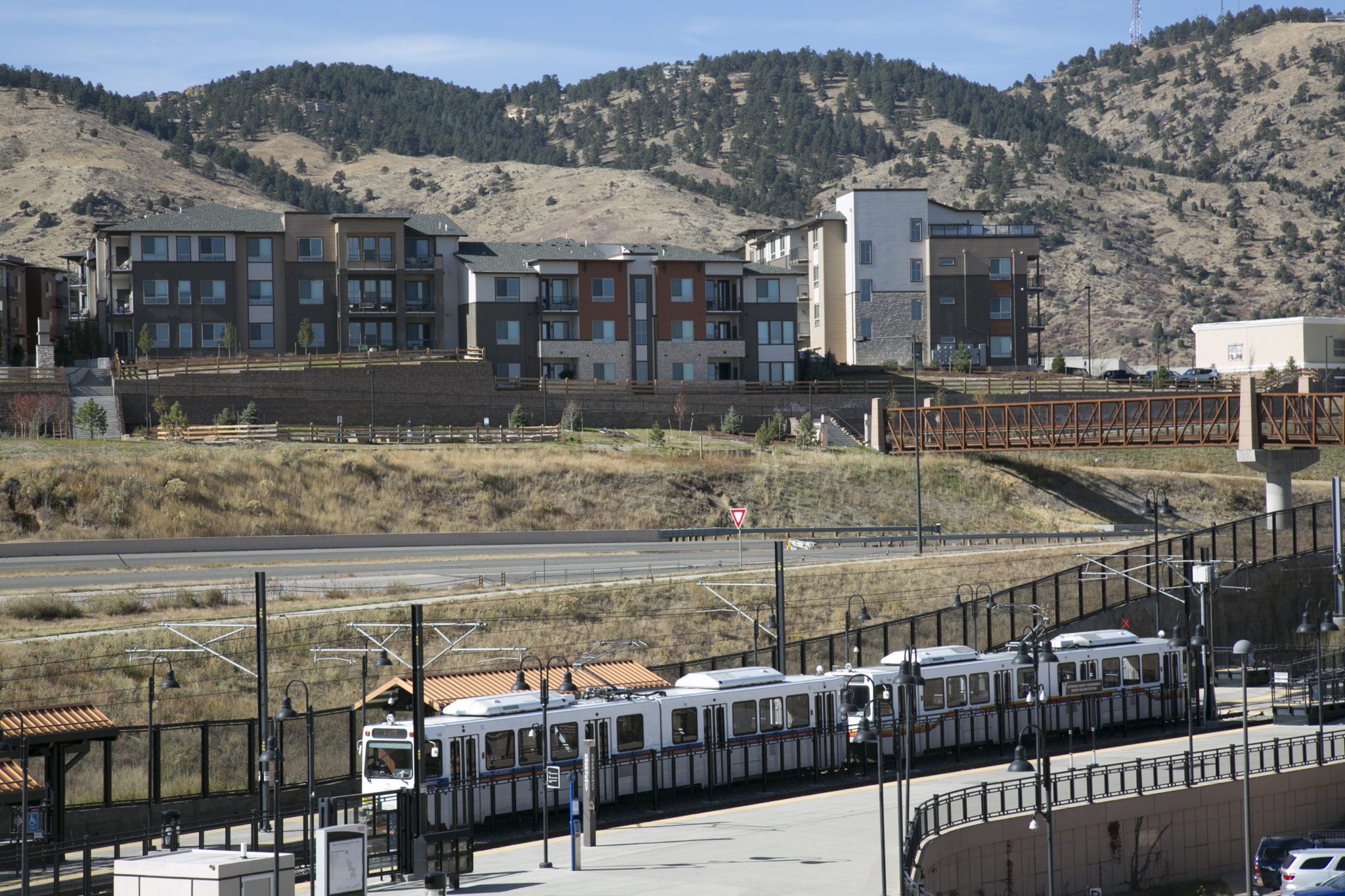 As part of the Outlook Golden Ridge multifamily community, the architects incorporated a garden path that provides connectivity to the greater neighborhood and to the pedestrian/bike bridge that leads to the Golden Rail Station. Courtesy Victor Sanchez

Colorado’s billion-dollar investment in multimodal transportation is not only reshaping the Denver transportation grid, but also unlocking new housing, entertainment and live-work-play opportunities across the greater metro area.

Many new multifamily developments are starting to emerge adjacent to these stations, reshaping neighborhoods into transformative urban districts. Each new transit based district is a critical framework for residents, commuters and businesses to develop into a continually reshaping sense of place. As each new station center develops, architects and planners need to define these urban spaces as an inclusive and dynamic place for people to be and to interact.

Many of the newly built or planned elements at these transit locations are multifamily for-rent communities offering an affordable alternative to downtown. These communities are the first piece of the master-planned vision of various cities. Each station will have its own unique character with its own community connections and development drivers. It is the responsibility of these developments to play a vital role at full build out, in addition to its role as a standalone property helping to define and connect the area.

For example, we designed the Iliff Station Apartments, which is being developed by SteelWave and recently broke ground at the station. The apartments tie the surrounding lower-density, primarily single-family neighbors to the higher-density station core. The city originally envisioned the site with a slightly higher density but the neighbors were concerned about traffic. We designed a project that met the density goals of the city and addressed traffic concerns. Through this project, we connected the existing communities to the station with great open space so that the residents have a sense of place today before the station’s full build out.

Paying attention to the public realm within a transit-oriented development is critical to promoting and defining the district’s sense of place. Key components include friendly ways to enhance the pedestrian experience with distinct gathering zones, wider, well-lit sidewalks, pathways and bike paths that seamlessly link people to the station. The development needs to include public spaces to allow for activities that promote both resident and neighborhood interaction. The program needs to promote users in street-adjacent spaces that are lively, active and provide sense of pedestrian scale such as restaurants, coffee shops and shopping. Residential buildings should extend to the street with stoops and active zones that align with the public realm. People want to be part of the action.

We currently are collaborating with Forest City on the master plan and potential first phase of the Central Park Station in Stapleton. Though still in discussions, the first phase will start with a six- or seven-story for-rent residential community. To create the sense of place, the overall station area has been planned with a large central plaza at the core surrounded by a mix of uses.

The first residential building will encompass one corner of this future plaza only and efforts are being made to create “place” for today as well as tomorrow. Emphasis will be on the amenity deck that overlooks the main street into the station core and will include scaled-down, two-story massing that addresses the pedestrian scale and presents to the sidewalk with steps up to each front door. Important gateways from all directions are addressed with critical changes in mass or lack thereof to recognize distinct points within the station area. The overall station plan will take years to come to fruition, but the plan is designed such that the flexibility will allow for the organic development based on market demands and consumer tastes while maintaining the important qualities of place.

Each of these new transit stations creates opportunities for increasing the amount of affordable housing that is still in, or connected to, places people want to live. Traditionally, renters are attracted to the activity and energy of an urban core, but often are priced out of living there. The addition of these new station centers with high-quality live-work-play opportunities makes this living attainable. Residents can walk down to the local microbrew or catch the train downtown and be in the middle of it all with a short walk from their front door to the train. The greater sense of attainability will create pride in the neighborhood and a sense of home for people who may otherwise be more transient in nature.

It took great forethought and vision for the city of Denver to get out in front of public transportation. Creating opportunities for new housing near these transit hubs will have long-term impacts for each station and neighborhood. Walking distance to public transit hubs reduces regional traffic and helps alleviate congestion, pollution and lost efficiency. Daily walking has a measurable factor in public health as well, resulting in improved fitness and reduced health care costs. Walking commutes – even a few blocks – encourages critical social interactions with neighbors and vendors, which in turn builds a sense of community, cohesiveness and public spirit for years to come.