U.S. construction is down, Denver decreases 51% 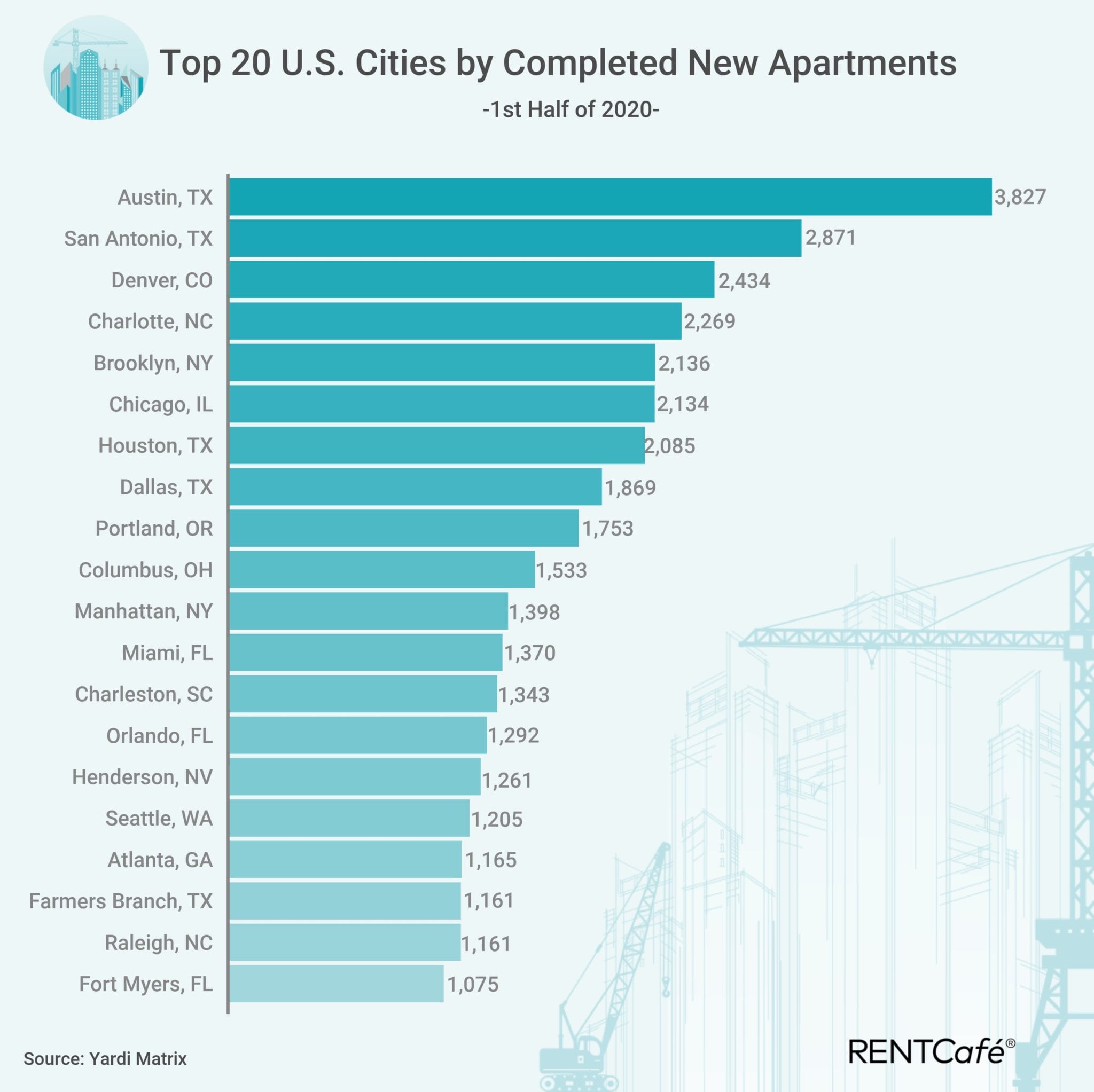 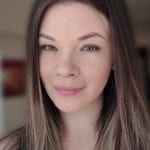 Nationwide, apartment construction is experiencing a considerable slowdown this year with 293,000 new apartments projected to hit the market – a 12% drop compared to last year’s deliveries. The decline is primarily due to fewer construction crews and permits, coupled with reduced funding and temporary bans on construction due to the COVID-19 pandemic. However, if the downtrend persists, it’s possible that an even smaller number of apartments could be delivered in future years.

Denver metro expected to add 5,700 new units this year, 51% fewer than 2019. According to Yardi Matrix, despite these major inconveniences, some metros are managing to maintain the same level of construction as last year, while others are struggling to keep up. The RENTCafé research is based on data on rental apartments in large-scale buildings with at least 50 units across 99 U.S. metropolitan statistical areas.

Specifically, per the estimates, the Dallas-Fort Worth metro is expected to build about 19,318 new apartments this year, maintaining its top position. And, with its population growing by 117,000 between 2018 and 2019 alone, the metro is doing a good job in attempting to meet the demand in housing. DFW is followed by New York with 15,952 new apartments expected in 2020 and Houston with 10,404. While the former saw a decrease of 60,000 in its population, the latter added more than 90,000 new residents in the same time period. 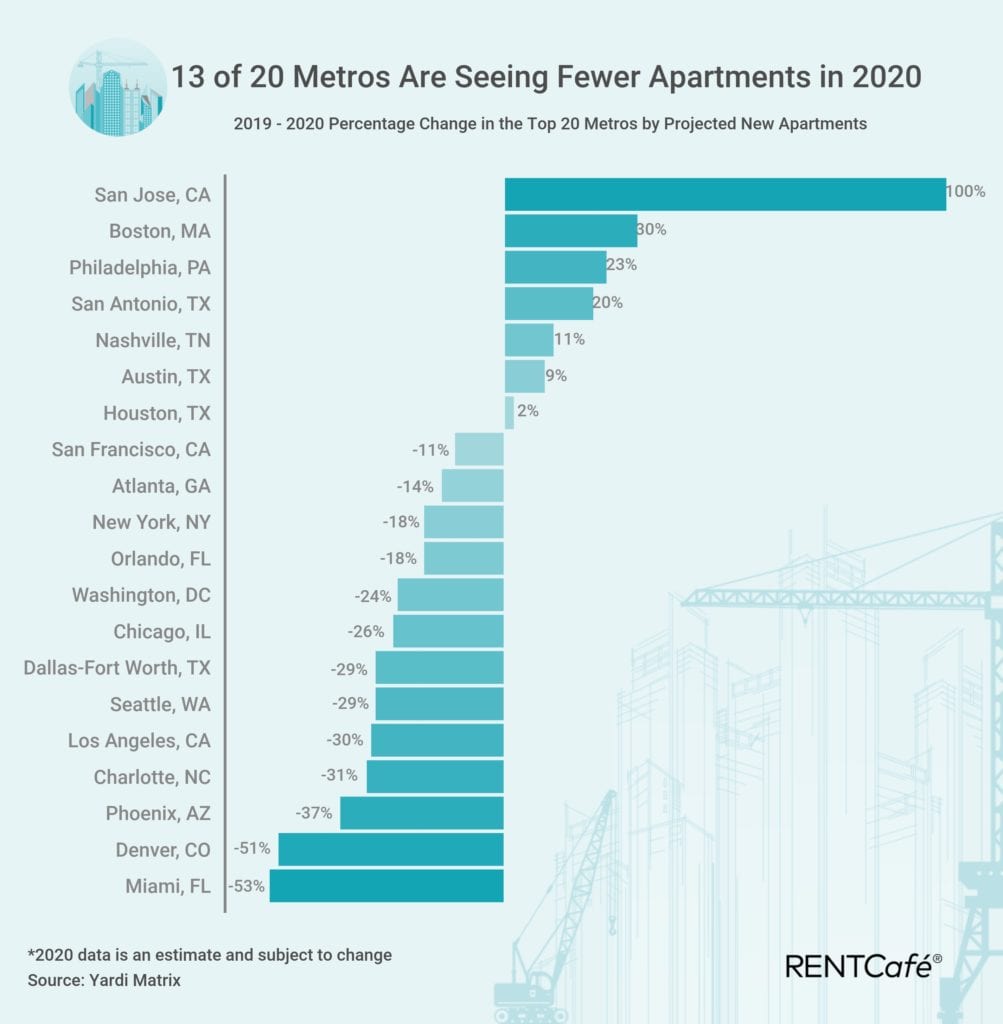 Apartment construction is down 12% nationwide. Denver was the metro area with the second-highest drop.

Denver also is present in the top 20 metros with the most projected new apartments – it’s expected to deliver 5,695 new units. Occupying the 14th spot on the list, the Denver metro is building slightly more units than larger metros like Phoenix, which is projected to add 5,665 new apartments this year.

However, looking at the number of deliveries compared to last year, 13 of the 20 most-active metros are witnessing a slowdown – and the Denver metro is seeing the second-highest decrease, of 51%. In fact, Denver was surpassed only by the Miami metro, which had a 53% drop in apartment deliveries. Compared to last year’s 12,533 new units, the Miami metro deliveries are significantly lower, but this also may be the result of four consecutive years of active construction. To put it into perspective, more than 50,000 new units were built in the Miami metro between 2016 and 2020.

Conversely, other metros are witnessing a major boom in construction this year, with San Jose, California, expected to increase its supply of new apartments by 100% and Boston by 30%. Meanwhile, the Philadelphia metro – despite boasting the third-highest increase at 23% – is projected to add only 4,461 new apartments this year. That number is especially low considering the area’s impressive population of more than 6 million residents. 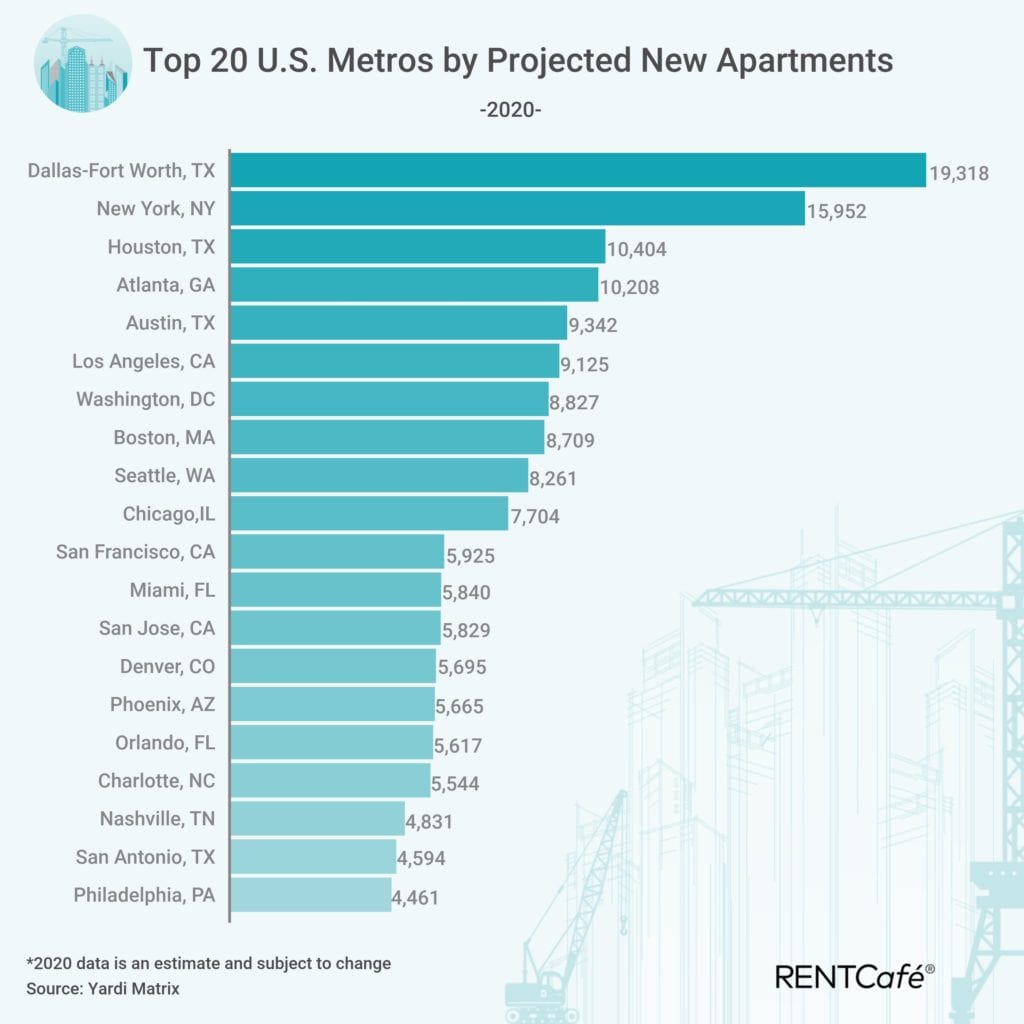 At a city level, Denver comes in third in the race for more apartments. The silver lining is that Denver is building considerably more apartments than most of the U.S. cities in the study. For instance, 2,434 apartments were delivered here in the first half of 2020 – a number that was surpassed only by Austin, Texas, with 2,827; and San Antonio, Texas, with 2,871. Meanwhile, the Mile High City remains a popular choice for many renters, ensuring that the demand for apartments will continue to increase.

Texas also landed three other cities in the top 20: Houston built 2,085 new apartments in the first six months of the year; Dallas had 1,869; and Farmers Branch completed 1,161.

Notably, Charlotte, North Carolina, while not as active in terms of construction at the metro level, still managed to build 2,269 new apartments this year, which is more than both Brooklyn (2,136) and Chicago (2,134). And, rounding out the top 20 was Fort Myers, Florida, with just 1,075 new apartments delivered in the first half of 2020.

The construction industry continues to face major challenges due to the pandemic, and it’s becoming increasingly difficult to predict how severe the fallout will be. However, when the threat of COVID-19 subsides, we may see the market recover and apartment construction start to pick up speed in the near future.