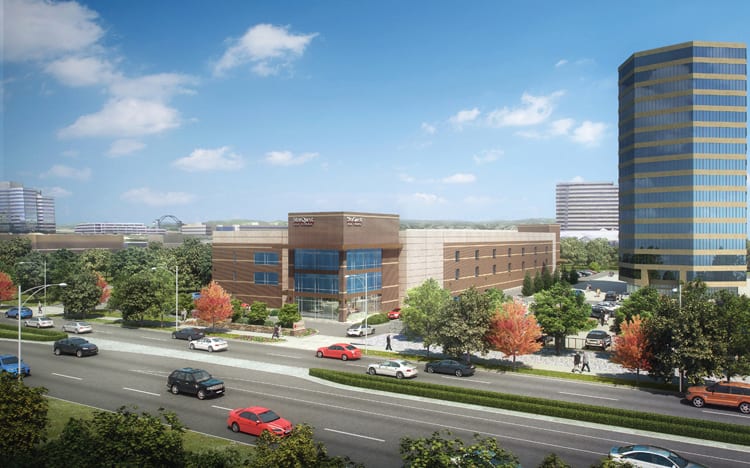 A 910-unit StorQuest is being constructed in the heart of the Denver Tech Center.

A national self-storage company is raising its profile in the Denver area with developments at a busy intersection near downtown and in the heart of the Denver Tech Center.

The William Warren Group, which owns or manages a dozen self-storage facilities in Denver, is under construction on an 815-unit StorQuest facility at West Sixth Avenue and Kalamath Street that will open by early September. Another 910 units are under construction at 5301 DTC Blvd. in Greenwood Village. The DTC StorQuest will open about a month earlier.

Both will be high-end, secured three-story facilities with partial basement levels and interior access. They will feature climate control, gated access, modern leasing offices staffed by two employees each and conference areas with Wi-Fi for customer use.

“We intentionally select more desirable sites and put more money into the design and materials of the buildings with the objective that we’ll be able to achieve slightly higher rents,” said Jon Suddarth, development project manager. The company focuses on offering modern, cost-efficient facilities with special attention to customer service.

Located at a highly trafficked intersection, the $11 million StorQuest at Sixth and Kalamath has 220,000 people within three miles. The DTC property, an approximately $14 million development, also occupies a very visible site in a market with high barriers to entry.

“This land wasn’t inexpensive by any means, but it definitely pencils for us,” Suddarth said of the tech center property. The 1.7-acre site sold for $2.9 million, or $39 per square foot.

The William Warren Group plans to start construction of two additional facilities in the Denver area, one with ground level retail, by the end of the summer.

While its typical pro forma for a new facility calls for a 36-month lease-up, the newest StorQuest in the Denver area, a 634-unit conversion of a former manufacturing plant at Interstate 25 and East Evans Avenue, leased up in 11 months, according to Suddarth. In that area, “There’s quite a bit of supply, but it’s all older supply,” he said.

According to Suddarth, 10 percent of the population has a self-storage unit, with the preponderance of demand coming from residents of single-family homes. During the recession, few new projects were built, creating a pent-up demand; however, development has been ramping up with twice as many projects under construction or in entitlements than two years ago.

Dcb Construction Co. is the design-builder for the StorQuest facilities.