Water St. and the aquarium: Isolated yet connected ‘Whale Site’ 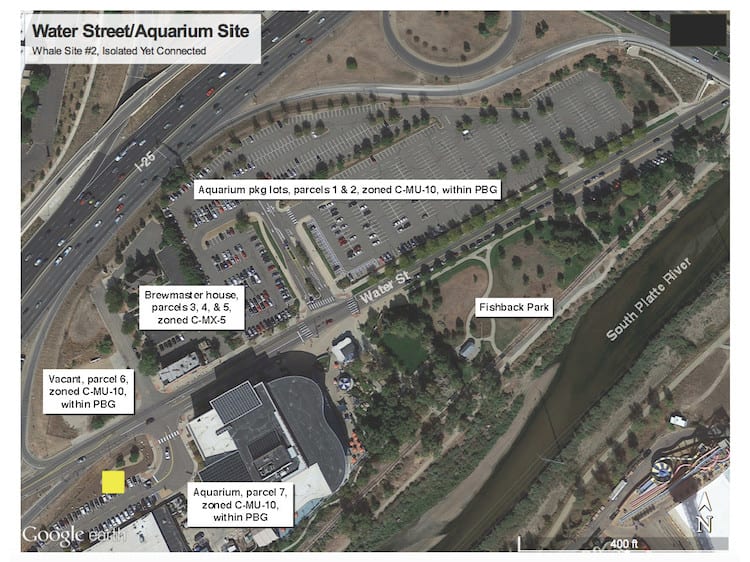 This aerial and the accompanying chart include a listing of parcels on Water Street. The owner of the three largest parcels (Nos. 1, 2 and 7), which cover the aquarium and the parking lots, is Landry’s Seafood company out of Houston. It owns and operates the aquarium. The third “planning building group” owner controls about 30,000 square feet next to I-25 ( No. 6). Two additional owners of the non-PBG land share three parcels (Nos. 3, 4 and 5) on the north side of Water, containing the two potential landmark buildings. The large home is the former Zang brewmaster’s residence. It is not listed as a local landmark but is on the National Register of Historic Places.

This the second in a series on Denver’s “Whale Sites,”defined as extremely prominent and underdeveloped land parcels whose size and location will define Denver’s future growth and development. Examples include the Burnham Yard, the former Denver Post Printing Site, Elitch Gardens, Broadway Station Area, RiNo Station and the Denver Design District.

If you head west from the downtown REI and cross under the Speer Boulevard viaduct on Water Street, you come across a stretch of about four underdeveloped city blocks that lead to Interstate 25 access ramps and the Jefferson Park neighborhood. Here you will find Fishback Park hugging the Platte River, an expanse of parking, a couple of 100-plus-year-old buildings and a privately owned aquarium.

Water Street is not quite downtown. It’s officially part of the Jefferson Park neighborhood, but materially nothing like Platte Street, LoHi or Jefferson Park. Bracketed by a river, viaduct and an interstate, this pocket can either be reasonably stitched back to the city around it or appreciated as its own place. Directly across the river to the south is Elitch Gardens, and the Cherry Creek/Platte River confluence is only about 500 feet away. The West 23rd Avenue freeway ramps offer outstanding regional reach. One of the owners, William Brinkerhoff, believes the pieces are in place to create a destination: “It’s truly accessible, and once you’re here, the choice on whether to head downtown is easy.”

With a mix of pre-2010 and current zoning categories, several owners and a building overlay, the land-use restrictions are not ideal. Most of the privately held land is part of a 1996 planning building group, or PBG, which was rezoned to C-MU-10 with waivers in 2004. C-MU-10 is a pre-2010 zoning designation that does not limit height but is otherwise constrained by a 2:1 floor-to-area (FAR) limit. A wide range of commercial uses are allowed, but the particular waivers or conditions to this zoning include an 80-foot height limit, recreation services permitted by right, floor area calculation guidance, and miscellaneous parking controls. The two parcels on the north side of Water Street containing buildings are zoned C-MX-5, or five-story, mixed-use development.

The 1996 PBG was dubbed “Colorado’s Ocean Journey.” It came about through a regional effort to place an aquarium somewhere in the Denver metro area. The goal in 1996 appeared to be a long-term, phased plan to enable creation and expansion of an aquarium and supporting uses. It included several small office buildings as well as a parking garage. The aquarium changed hands to Landry’s via bankruptcy auction in about 2003, after struggling financially. The intent of the 2004 rezoning (to C-MU-10) is not clear. Given the parking requirements, PBG and FAR limits within this pre-2010 zoning, this land appears ripe for a rezoning.

PBGs are a pre-2010 zoning vehicle for establishing building rights and entitlements. This is important because, according to city staff, this PBG remains one “zone lot,” meaning landowners within the PBG must agree to sign-off/approval of any amendments. With only two owners, this should be achievable.

Scale and location dictate some big-picture thinking. For example, in order for this area to exhibit the vibrancy of Platte Street, stronger local connections could help. Platte Street succeeds because of its links to LoHi and the Central Platte Valley. Hence the below listing of big ideas and concepts to consider. In contrast to the possibilities found in the next section, these assume rezoning and construction of significant infrastructure.

Preliminary research suggests that none of the land is on the market and assemblage cannot be assumed. Some limitations on use could be expected, such as the need to serve the aquarium’s parking needs. It’s worth asking if the aquarium is profitable or if an infusion of capital could boost operations.

Big-box retail industry interest in serving downtown and its environs has been a rumor for several years, based on outstanding demographics. But as e-commerce grows and Target arrives on 16th Street, this prospect may be dimming. If it hasn’t dimmed, I-25 access will “drive” this opportunity. Assuming segmented property ownership, each of the below options has some level of feasibility, although some plans may require upzoning.