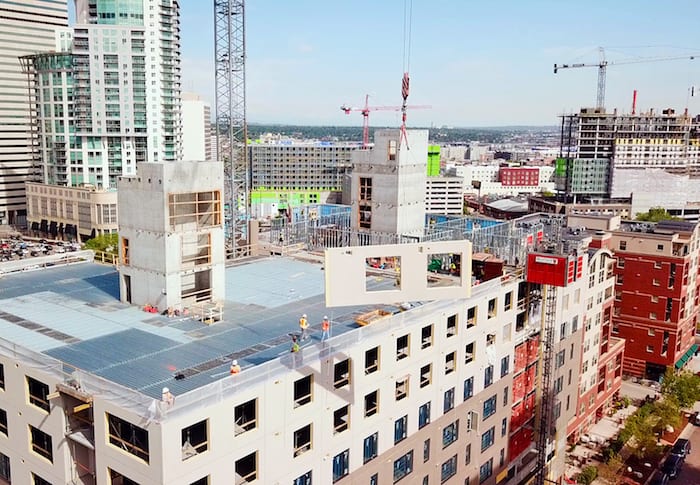 Weitz tops out SOVA, which will deliver 211 apartments in downtown Denver.

The Weitz Co. took a major step toward delivering 211 new apartments in downtown Denver when it topped out SOVA, a 12-story multi-unit residential project for developer McWhinney in the city’s Uptown neighborhood.

“We stretched the imagination of what can be accomplished at SOVA with our trade partners,” said Bruce Porter, executive vice president and general manager of The Weitz Co. “Some of it was driven by circumstance, but every decision was purposeful in order to create value for McWhinney and a final product that will generate pride and satisfaction.”

The exterior walls were the most technical component of SOVA. They were prefabricated off site in 10-foot-tall-by-20-foot-wide panels (on average) and then delivered on a flatbed truck over a six-month period for installation. Manufactured by Littleton-based South Valley Prefab, the wall panels came 100 percent finished, needing only windows inserted to complete the exterior skin of the building.

Working on a zero lot line job site that has limited space for material lay down was one factor in using prefabricated exterior walls. Two others were creating a predictable project schedule in a tight labor market and eliminating upward of $1 million from the project budget by not scaffolding the building.

Incorporating other prefabricated systems such as the electrical and plumbing – in addition to utilizing the Infinity metal framing system on the interior – led Weitz to create a big room atmosphere with all project stakeholders and trade partners before starting construction. The upfront planning enabled the project to be fully built in a virtual environment, increasing collaboration with all team members and eliminating potential issues during construction.

“Early in design, we focused on prefabrication with the owner and design team for speed to market with Infinity’s load-bearing wall system and South Valley’s exterior prefinished wall system,” said Laura Eathrone, senior preconstruction manager of The Weitz Co. “To support the prefabrication schedule, the project team built SOVA 100 percent virtually using the building model before a shovel was put in the ground.”

As construction progresses in anticipation of a February completion, SOVA will be finished with more than 20 percent of its purchased building materials containing recycled content sourced within 500 miles of the project.

Published in the August 2018 Development, Construction & Design section of CREJ.