Zeppelin Station will feature a variety of “best-in-class” food operators.

Designed by Dynia Architects, White Construction Group broke ground on the project in October 2016. It’s the third Zeppelin Development project White has collaborated on with Dynia and Zeppelin. Their other RiNo projects were Freight at Taxi and later The Source food hall.

“White Construction Group has again been part of the ‘cast’ and once again given the opportunity and challenge of constructing the visions and designs of Zeppelin and Dynia,” said Tim White, president of White Construction Group. “To play a substantial role in the renaissance of the culinary and marketplace experiences in Denver has been a real privilege – and the renaissance continues!” 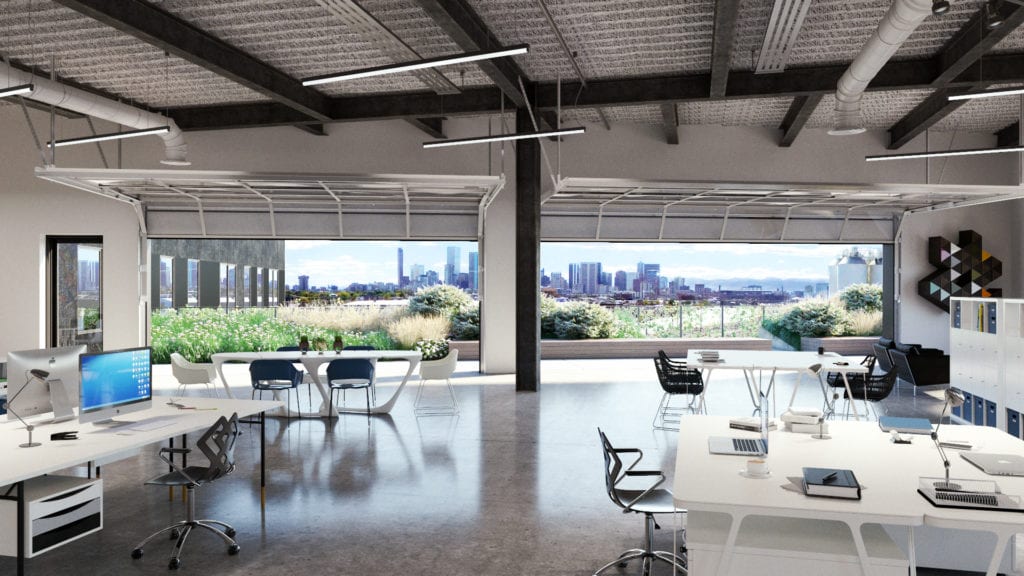 In Zeppelin Station, garage door are used to access cascading terraces that are oriented toward the downtown skyline

“We first used garage doors in office suites in the Freight building – a repurposed 1950s-era truck terminal that we designed for Zeppelin Development 10 years ago,” said Stephen Dynia, FAIA, design director of Dynia Architects. “Realizing the effectiveness of garage doors in connecting an office environment to the outdoors led us to use them on all levels of office space in Drive 1 and Drive 2. In Zeppelin Station, we used this strategy to access cascading terraces that are oriented toward the downtown skyline.”

The market hall will be the new home of the RiNo Arts District and the organization’s affiliated retail shop, showcasing not-found-elsewhere pieces created by local artists.

“When we originally envisioned Zeppelin Station, we imagined a day and night destination where you’d find the most sought-after food and drinks in the city,” said Justin Anderson, director of hospitality development for Zeppelin Development. “Over the past year, we’ve assembled a lineup of highly regarded, independent operators who will showcase their very best dishes in an environment that encourages diners to personally experience the dishes being prepared through smell, sight and sound.”

“Denverites are seeking similar amenities in their workplace that they have at home: well-designed spaces, ready access to fresh air, great views and natural light in a location that’s easily accessible by foot, bike and transit. Having a one-of-a-kind food hall experience on the ground floor is the ultimate amenity,” said Kyle Zeppelin, president of Zeppelin Development.

“We value our work with Zeppelin Development because of a shared commitment to create buildings and spaces that have a positive impact physically and culturally,” Dynia said. “We look to connect the culture of individual buildings to the immediate context, in this case rail lines and a transforming neighborhood, and to the larger context of the city. Zeppelin Station, as a private project, is part of the public domain – a train station with international food offerings.”

The final culinary concept at Zeppelin Station, “No Vacancy,” will feature a rotating lineup of local, national and international restaurant talent that will occupy the front-and-center space, each for a 60- to 90-day stint.

The first guest to stay in No Vacancy will be Comal, the beloved, heritage food incubator in partnership with nonprofit Focus Points Family Resource Center, where female entrepreneurs from the Globeville and Elyria-Swansea districts cook and serve the Mexican, El Salvadorian, Syrian, and Ethiopian foods that they grew up eating, while honing their culinary and business skills. Zeppelin Station will be the second, albeit temporary, outpost of Comal, which calls the Taxi Development its permanent home.

A full-service anchor restaurant, separate from the food stalls, will be revealed this summer.

Companies that will office at Zeppelin Station include Beatport, Brandfolder and Love Your Hood, among others.