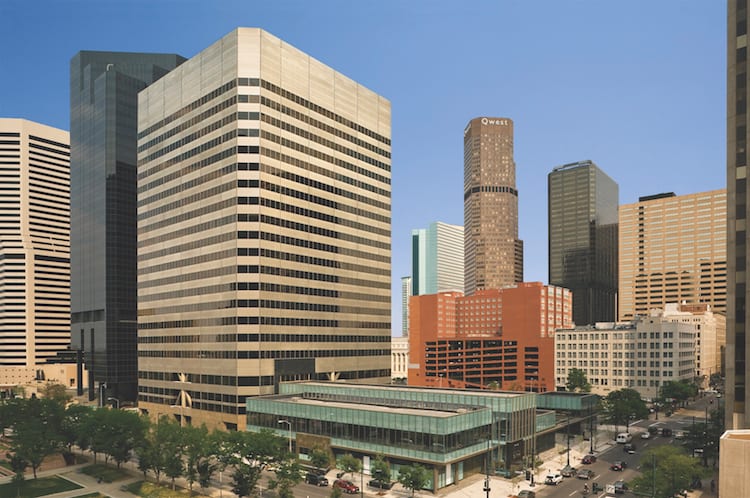 Williams was an active member of the Building Owners and Managers Association throughout her career. Here she’s being sworn in as a board member. She also received BOMA’s The Office Building of the Year award twice, in 1990 and 1994, while managing One Tabor Center. (Vector Property Services) 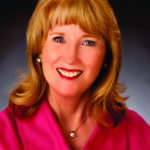 There was an oversupply of teachers when I graduated in 1975, and art programs were getting cut from school budgets across the country. As a result, I became a graphic designer in my first career working for a publishing company, a printing company and an advertising agency. Then I worked as the office manager for a travel agency, where I handled advertising and promotions. That experience led me to a job as the office manager for the CentrePoint development in Aurora with Young Realty Corp. based in Dallas. That was my foot in the door to the real estate industry. The market was not good at the time, so Young Realty closed its Aurora office.

I moved on to Trammell Crow Co., working as a retail leasing administrative assistant. That was also the year I decided to get my real estate license because I thought it was an interesting business. Our technology was IBM Correcting typewriters. People would dictate letters into a small tape recorder, and their assistants would listen to the tapes in a dictation machine with a foot pedal that regulated the speed as they typed the letters onto letterhead.

Later in 1985, I was recruited to be a leasing assistant with the Siteman Organization, based in St. Louis. My boss took me to my first Building Owners and Managers Association meeting at the Denver Athletic Club downtown. I will never forget that meeting because there were about 300 people in the ballroom – a sea of men in black suits with white shirts. I counted five women in the room including myself! Back then, there was a cash bar, because it was common for people to have a drink when they went out to lunch.

In 1988, the Siteman Organization closed its office in Aurora at the same time Trammell Crow Equity Partners purchased The Tabor Center. I returned to Trammell Crow Co. as the assistant manager of the office tower and thought I was the luckiest person in the world to land at the premier mixed-use property in downtown Denver. The property manager’s husband was transferred to Chicago by his company one year later, at which time I was promoted. I first got the title “property manager” in May 1989 – 30 years ago. My seven years at One Tabor Center were growth years for me in the profession. I read lots of real estate magazines and received my Real Property Administrator designation over three years through Building Owners and Managers Institute. I created forms and lists to make sure nothing slipped between the cracks, and then I honed and improved those documents over the years.

I became active in BOMA, where I initially joined the government affairs committee. My involvement proved invaluable as I built a network of peers and vendors to whom I could go with questions or to share information. It became my hunting grounds when I needed to hire a new employee, and I gained many personal friends through the association.

During the years at One Tabor Center, I did all of the annual budgets on green-bar tablets that were spreadsheets with columns and rows on large ledger paper. We used calculators with paper rolls to double check our data entry, and then we transferred the numbers in pencil onto the ledger pages. I remember the time I said to my boss that I thought we needed to get a facsimile machine because that was the direction businesses seemed to be going.

Those were also the years that federal, state and local regulations started heating up. The Americans with Disabilities Act became law in 1990. I purchased the BOMA ADA guide so the chief engineer and I could do the building survey floor by floor to ascertain what changes would need to be made in order to comply. We started a recycling program, and tenants would separate the recyclables and put them in bins that were located in the freight elevator vestibules on their floors. Smoking in the workplace was as common as drinking coffee. The dress code started changing in late 1994, and women were permitted to wear pantsuits on Fridays. Prior to that, women wore dresses or skirts with jackets, and hose with closed-toed high heels every day of the week. Property managers and engineers had pagers 24/7, and we returned calls via landlines.

In 1995, I was recruited by Crescent Real Estate Equities, based in Fort Worth, Texas, to manage MCI Tower downtown, which is now known as 707 17th Street. That was the first time I had a computer at my desk, and we had email! That also was when I started doing budgets using Excel, which was an amazing advancement. Property managers became more efficient with these new tools, and the speed of production started ramping up. Instead of handwriting or dictating correspondence, we began typing our own letters and memos, which made us more self-sufficient.

Another federal law, the Telecommunications Act of 1996, passed, which deregulated the communications industry and allowed any communications business to compete in any market against any other. Owners started negotiating and entering into telecommunications license agreements and charging telecom companies for bringing their equipment and backbones into buildings. We hired consultants to track and manage the equipment and cabling in buildings because the ownership from the minimum point of presence – typically the main telephone room – was now transferred to the building owner.

Remember Y2K? It stood for Year 2000, and it created a frenzy of activity in 1999 as we prepared for the turn of the century at 12:00 am on Jan. 1, 2000. The fear was that computers would stop working as the date rolled from 12/31/99 to 01/01/00 because early computers used only two digits for the year instead of four (00 versus 2000). There was speculation that computers would be confused by the year “00” and simply crash. But nothing actually happened because the problem was realized in sufficient time to change the year to four digits by IT personnel and computer companies in advance.

In early 2000, I was recruited by Mile High Properties to manage Qwest Tower, which is now known as 555 17th Street. At that time I had a personal digital assistant that contained my contacts and calendar; however, it did not have email. We operated our PDAs with thin styluses and thought they were very high-tech. The cash bar went away at BOMA lunches because it was no longer fashionable for people to have a drink at lunchtime.

I was recruited by Means-Knaus Partners to manage Park Central in mid-2001. After Sept. 11, emergency preparedness came to the forefront with greater emphasis on tenant emergency manuals and floor warden trainings. I got my first cell phone, which replaced my pager. We were able to enter a limited number of frequently called numbers, but it did not synch yet with contacts, calendars or email. Building owners, tenants and brokers were getting more sophisticated, and as a result, more demands were made of property managers and property accountants. I subscribed to “Go To My PC,” which allowed me to log into my computer from any other computer, which meant I could work from my laptop at home and while I was on vacation. The stress factor increased, and most property managers worked beyond an eight-hour day. The state of Colorado passed the Clean Indoor Air Act in July 2006 that banned smoking inside office buildings, although many employers already had adopted nonsmoking policies.

In mid-2007, I was recruited by Vector Property Services to manage 1001 17th Street. That was a fun experience because the property underwent major renovations that included taking each floor back to core-and-shell condition. When I started, I had a cell phone with an antenna that had to be pulled out when in use. We were excited when we got Blackberries with the push-to-talk feature that replaced our two-way radios. They were combined phones and walkie-talkies that synched with our contacts, calendars and emails. When Nextel decided to switch their radio frequency for emergency-use only, we had to purchase two-way radios again that are used in addition to cell phones. We now carry computers in our hands with iPhones and Androids.

The immediacy of communications has heightened expectations. People are able to log into their company servers so they can work from any other computer, giving them more flexibility. We implemented single-stream recycling, and everything switched as the large compactor on the dock that was used for trash now contained recyclable materials, and the small containers were now used for trash. We also added battery and electronic recycling.

When I started in the business, I did not foresee adding active shooter trainings for tenants and bleeding control classes for the building staff. Another change over the years has been the focus on amenities as buildings check the boxes to add or upgrade state-of-the-art conference centers, collaboration centers, fitness centers with showers and lockers, secured bicycle storage areas, expanded outdoor patios, etc., to stay competitive in retaining and attracting tenants. Dress codes for many of the tenants in our buildings have virtually gone away, especially for high-tech companies, as they compete to attract and retain talented employees.

I think one of the biggest changes is that leases have become longer and more complex. We now manage by exception because most leases have caps on expenses, and many leases have different definitions about what is considered controllable versus noncontrollable expenses. When I started managing buildings, we had two pools of expense types at my building. Now calculating operating expenses has become quite the complicated exercise and is done almost tenant by tenant since so many variations are negotiated in the leases. Also when I started in the business, there were no encumbrances. Now a space can have multiple tenants that have various rights to it, and it is so important to stay on top of those rights and send out notices as required by the leases.

A lot has changed in the last 30 years since I first received the title “property manager.” It has been a great career that I thoroughly enjoyed – most of the time. It requires the use of both sides of the brain due to the analytical aspect of financial budgets and reporting, plus the relationship aspect of working with owners, brokers, vendors, tenants and co-workers. Most property managers say they like the variety due to the involvement in many different things and the fact that no two days are alike. I am happy to report that the monthly BOMA lunches now have a good mix of men and women, although there are no longer 300 people in attendance because everyone is so busy.

I feel fortunate and grateful for the opportunities and experiences I have had during my real estate career, and I loved each of the buildings that I managed. Many thanks to the companies, building owners, brokers, tenants, vendors, industry peers and teams that I have worked with over the years.