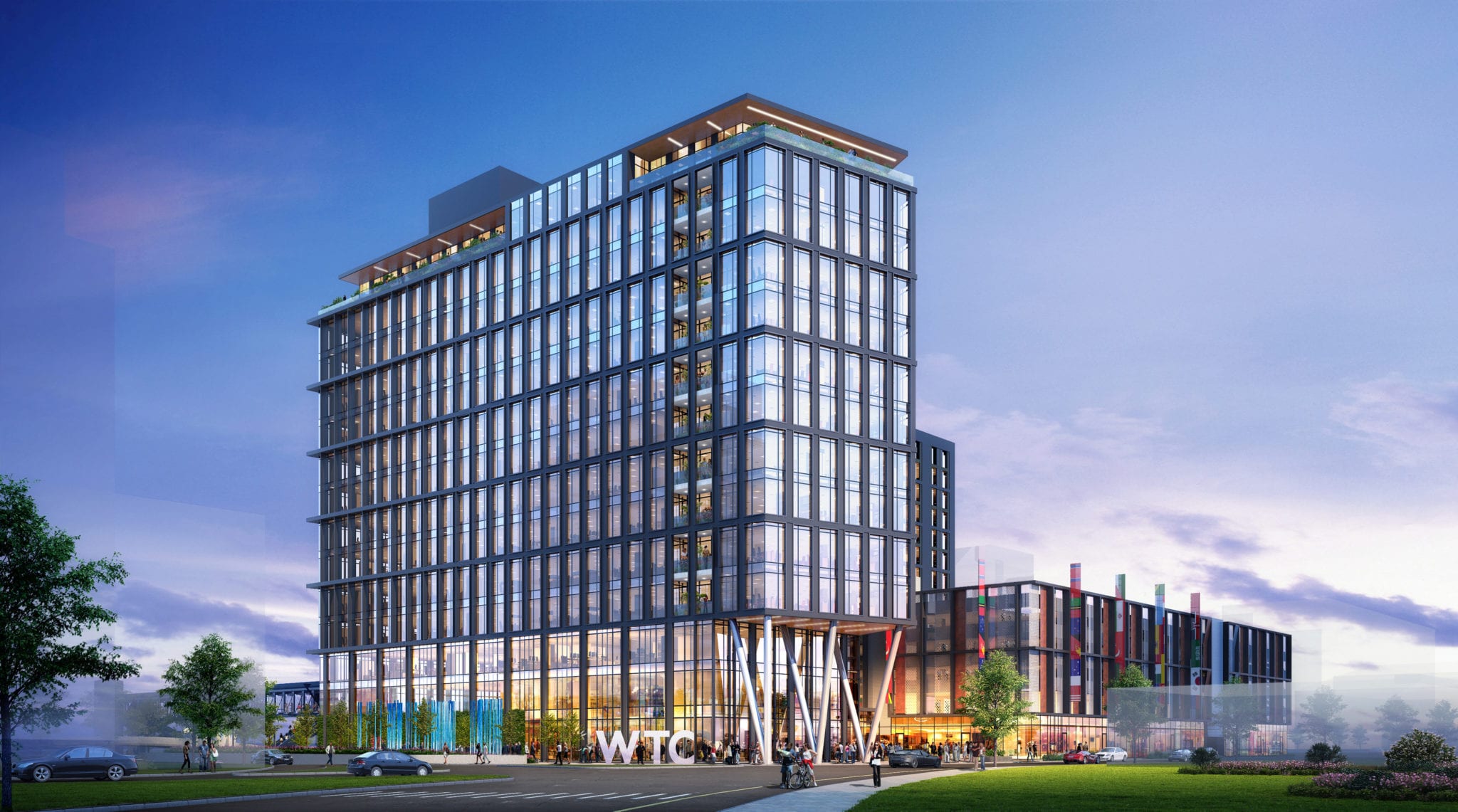 The World Trade Center will sit at the 38th and Blake commuter rail station.

Groundbreaking for the World Trade Center Denver in River North is expected to occur in the fourth quarter, with Golub & Co. joining Denver based Formativ as co-developer and capital partner for the 14-story office building.

The 350,000-square-foot building at 38th and Blake streets will be accompanied by a nine-story, 240-room hotel and conference center to be co-owned and developed by Formativ and Memphis-based Kemmons Wilson Cos. There also will be structured parking for 600 vehicles.

The estimated $300 million project, with immediate access to commuter rail between Denver International Airport and Union Station, is anticipated for delivery in 2021.

“World Trade Center Denver is a catalytic project for the city’s business and innovation community. So, aligning the right team with a shared vision is paramount,” Sean Campbell, Formativ CEO, said of the Golub & Co. partnership. “Golub & Co.’s experience and passion for developing dynamic projects complements my team as we work alongside each other to deliver something exceptional for our city and region.”

Already there are letters of intent for between 40 and 50% of the office building, according to Formativ Chief Operating Officer and Principal Josh Marinos. The World Trade Center Denver – an organization with several hundred Colorado members doing international business that has been involved in the project since Day One – will occupy 4,000 sf in the main lobby as part of a licensing arrangement.

“We’re really the center of the ecosystem of the international business community, so we will be convening and gathering around international business topics on a daily basis,” said Karen Gerwitz, the group’s president and CEO. The organization will manage the forum and classroom space and also will use conference center for the 100-some events it hosts annually.

Other occupants may be companies relocating or establishing second headquarters locations in Colorado, as well as existing Colorado companies outside downtown Denver that need downtown area locations for job retention because so many of their employees live in that area, said Marinos.

“Company X, Y and Z in Boulder or Broomfield, or DTC or even farther south, is not looking to pick up their headquarters and move it down here. They’re looking to have a presence here purely because their folks are living in Denver and around here.”

The Formativ-Golub partnership is significant because, “When you’re going through the process with potential tenants, they want to know it’s a sure thing. They want to know when you’ve got your banking lined up, who your capital partners are,” he said, adding tenants courted for the project now have those assurances and definitive dates for planning purposes.

The World Trade Center development is part of an opportunity zone, which didn’t materially impact the partnership with Golub & Co., but is an “added benefit,” Marinos said.

“World Trade Center Denver is a one-of-a-kind opportunity to deliver an exceptional project into one of the fastest growing office submarkets in the country,” said Golub Vice President Josh Patinkin.

Goldman Sachs Merchant Banking division is the lead equity investor in the project.

Broadmark Real Estate Management originally provided Formativ with financing to retire its existing debt on the property and pay for predevelopment costs of World Trade Center Denver, during which time Formativ negotiated final details with the co-developer. The original loan was just retired.

Broadmark funded a new loan to assist in acquiring the adjoining hotel parcel, while Formativ simultaneously sold the office parcel. The new bridge loan will carry the developer through the process of demolishing existing vacant structures on the property while it works toward acquiring conventional construction financing for the hotel via the partnership with Kemmons Wilson, a Broadmark spokesman said.

OZ Architecture is the architect for the World Trade Center development, and JE Dunn is the contractor. Tom Lee of Newmark Knight Frank handles leasing for the office building.

Valor Hospitality, a global hotel operator and sister company to Kemmons Wilson, will oversee the hotel, which will include 20,000 sf of conference space with a ballroom for more than 600 attendees. “There’s a symbiotic relationship between the hotel and the office … so that piece is imbedded in the DNA of the project,” Marinos commented.

Plans for the World Trade Center development first were announced in 2016. “This has been a while in the making. The irony is that, with all the work we’ve done, now the work really starts,” Marinos said.

“We’re all excited to have some big partnerships teed up. Everyone believes in this, and we’re excited for Denver to get this off the ground and moving forward.”