Designed by Dynia Architects, Zeppelin Station is a thoughtfully placed public amenity that has created a culture within the building for the neighborhood and the entire city.

This is a good time for American cities. After half a century of decline, people are craving the communality of urban environments and all that cities have to offer. Post-war urban planning, through programs such as the Federal Highway Act, slum clearance and the Model Cities Initiative, often damaged the urban fabric. We are now awakening to the vital connection between society and the built environment. 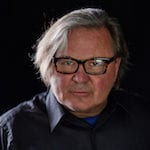 Denver has had its share of urban destruction, an example being the bisecting of established neighborhoods with highways. However, it has also had the foresight to create an airport linked by transportation to the city, and to place infrastructure like Coors Field in the heart of the city. Sometimes neglect can be good for the urban environment as a method of preservation. Saving enough fabric of lower downtown enabled its rebirth. And unlike Penn Station in Manhattan, Union Station was not destroyed, allowing it to reemerge post-recession as a vital public realm that includes new uses including a hotel. That effort became the center of a redeveloped zone of downtown that is still continuing to densify. 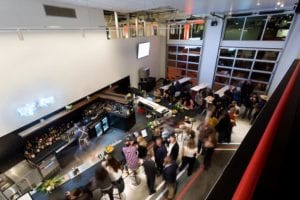 A look down on the on the ever-lively bar on the ground level, which is geared toward transit users.

River North, located in the southeast quadrant of the crossing of Interstate 70 and I-25, was never considered to be a neighborhood. It was a low rise industrial area on the north edge of the city subsequently abandoned for newer out rings of industrial parks. What was required to create a community was to invent places of public interaction. One of the first notable examples of this was at the Taxi development, which started with the redevelopment of an abandoned taxi terminal, and continued developing into a work/live campus. A particularly impactful project beyond this campus was The Source, a public marketplace in a 19th century foundry. When The Source opened in 2013, it was the first of this current wave of market halls, and drew the curious to an unfamiliar area of the city. Its effectiveness in introducing the public to RiNo spurred nearby development, including the soon to open Source Hotel, as well as creating a more welcome environment for residential development. 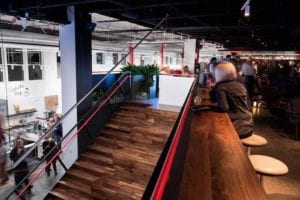 Big Trouble, the mezzanine level bar, provides patrons with a secluded lounge that caters to a more “mischievous” clientele.

Zeppelin Station is the newest offering in RiNo from Zeppelin Development. With 75,000 square feet of office space on the three upper levels, its dual role as a private office building and public train station distinguishes it above other development in the area. Located on the edge of the rail lines across from the 38th and Blake Street A line rail stop, it was a bold idea when planning began given the remote location. As in the above-mentioned RiNo projects, Zeppelin Development again exhibited the leadership to create a public realm where none existed. This public realm is in the form of a 25,000-sf bustling market hall with international food venders in a center island of kiosks with additional fare in booths along the perimeter. Amenities include digital screens with transit schedules visible throughout so no one misses their train or bus. A lively bar on the ground floor geared toward transit users is contrasted by a secluded lounge on a mezzanine level called Big Trouble that caters to those looking for, well, big trouble. Varied seating options including communal tables and an auditorium stair for casual eating and large garage doors allow the market hall to spill out onto a landscaped terrace on 35th Street for al fresco dining.

Architecturally, the building is a simple black box sliced diagonally in plan to access views of the urban skyline. Cascading planted terraces, accessed by garage doors allow a strong connection from the office spaces to the outdoors, with views of the city and mountains. A screen of silver framing with bright red accents forms an abstract billboard along the rail lines giving the building a unique and powerful image. 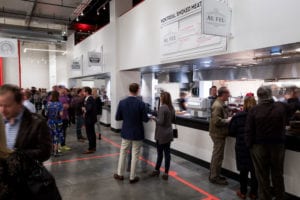 Home to a collection of innovative chefs, eclectic merchants and creative companies, Zeppelin Station is finding fast success as a unique destination in RiNo.

But it is the creation of a thoughtfully placed public amenity in the form of the market hall that is the project’s main contribution to the built environment of Denver, creating a culture within the building, for the neighborhood and for the city. It is a destination and a link, drawing pedestrians through it and helping to connect and integrate divided sections of RiNo. It will be interesting to observe the changes that will come to the area in part due to Zeppelin Station.