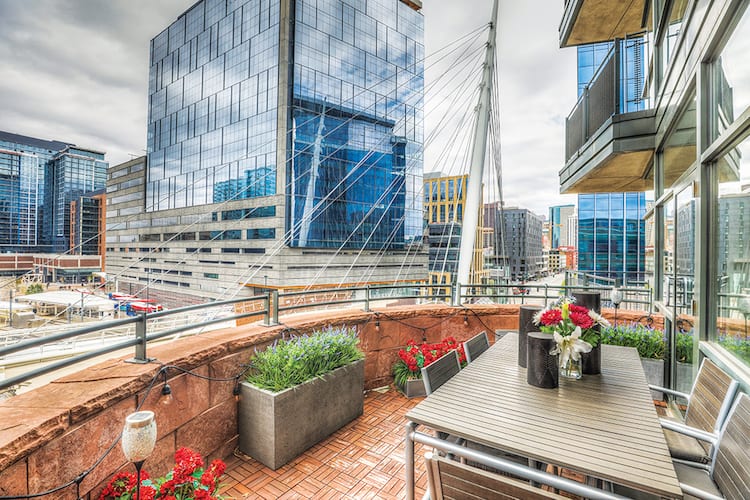 Straddling LoDo’s past and future, 16 Chestnut is one of the final pieces of the Union Station puzzle. It’s the final project in the heart of “the Saunders block,” so nicknamed for the numerous buildings Englewood-based Saunders Construction has built there.

And what a block: With the Millennium Bridge, the Triangle Building and the world headquarters for both Gates and DaVita, it’s exemplary of the shiny new transit hub that is Union Station. Measuring 250 feet tall, the 430,000-square-foot 16 Chestnut is almost part of the transit infrastructure, with a cantilevered corner directly above the Free MallRide’s lane.

“It’s the only project for me that I’ve worked on that had a bus driving beneath it while it’s under construction,” jokes Allan Williams, Saunders’ project manager for 16 Chestnut. “It was a huge push by the first of January to be done with all this work so the bus could come through.”

That’s the site in a nutshell: a busy block that’s between the Union Station light-rail stop and the Millennium Bridge, with as much foot traffic as anywhere in Denver.

After breaking ground June 1, 2016, the project is opening exactly two years later on May 31, 2018. The first five floors are cast-in-place concrete, and the sixth to 18th are structural steel with a glass curtain wall. At first, Saunders representatives would meet with city officials and other contractors every week to coordinate street closures and other logistics.

“A challenge of any project downtown is laydown space,” says Williams, noting the need for choreographed installations due to the squeeze on space. “Any materials had to be brought in and immediately installed.”

Headquartered right across the street, DaVita Healthcare Partners is taking roughly 80 percent of the building, and that changed the design of the project. The main differences: two slick Italian marble and wood-clad lobbies with their own elevator systems, instead of one.

DaVita has the eighth to 19th floors, and a private green roof that doubles as an event terrace on level 12, where the floor plate drops from 40,000 sf to 25,000 sf. Other tenants will occupy the sixth and seventh levels, above five levels of parking. On the second floor, there’s a fitness center that’s nearly 7,000 sf, complete with a yoga studio and locker rooms.

Saunders was the general contractor on the core-and-shell project and the buildout of DaVita’s space. DaVita “put their handprint on everything,” says Williams.

Case in point: the green roof on the 12th floor. “They upgraded it to almost be a party pad for their employees,” says Williams. The north-facing feature, about 8,000 sf, features a NanaWall, planters, bocce courts, and expansive views ranging from the Rockies to Commons Park.

DaVita CEO Kent Thiry says that the dialysis giant’s employees were actively engaged in the design process. The company will begin to move roughly 1,200 “Davitans” into the office starting in September, many from the adjacent (and cramped) headquarters; the space has capacity for 1,700 people in all.

Thiry says the goal was to intersperse office space with what he dubs “teammate oases,” noting, “We call ourselves a community first and a company second.” He highlights the fact that the green roof will be available as an event venue to nonprofit groups.

Many design tweaks were guided by a common philosophy. “We like connecting the inside and the outside,” says Thiry. “That’s what makes the lobby so special. Coffee by day or beer by night, it’s going to be a cool space.”

For DaVita, it’s all about creating an environment that’s about humans first and foremost, or as Thiry puts it, “the neighborhood Starbucks, not a corporate closet.”

Sustainability was another selling point. The target is LEED Platinum, and Williams is confident it’ll get certified. “Gensler put us in a very good position,” he says. “We’ve received 65 points [of 80 for Platinum] through design.”

Jon Gambrill, Gensler managing principal, highlights the tower’s curtain wall and mechanical systems as keys to LEED Platinum. “We’re on track,” he says. “We wanted to get that next tier of energy efficiency.”

“It’s shaping up to be almost a six-year venture,” says Gambrill, noting that Gensler won the job in summer 2012. “Once DaVita came on board, we adjusted the design/development phase to better fit their needs..”

“The basic massing of the building didn’t change at all,” notes Gensler Design Principal Brent Mather. “It’s more responding than any deviation from the vision.”

That involved the lower levels offer a nod to history with the shadows and contrasts in the precast, but then add something new with the contemporary upper levels. The goal was to “blur the garage,” says Mather. “We wanted to get away from the ‘Denver sandwich,’ where the parking separates ground-level retail from whatever’s above.”

“We were very focused on how the building related to the Millennium Bridge,” says Mather, noting that the placement of the fitness center and the DaVita entrance play off the proximity. “You can see the activity.”

A related issue was creating a good arrival experience for car commuters. “It’s a unique challenge to get that together without sacrificing the aesthetics of the building,” he adds.

But bicyclists won’t feel left out. There’s plenty of bike parking, and the non-DaVita lobby has a “bike box” that accommodates 30 bicycles and doubles as a piece of public art. “It’s a glass transparent element to celebrate bike commuters,” says Gambrill.

When DaVita signed on, it required some logistical gymnastics in the first phases of construction. “The partnership between DaVita, Saunders, East West and Gensler was pretty remarkable to make that happen,” says Gambrill. “At the end of the day, everybody had the same goal in mind: developing a quality building.”

He’s been involved ever since, through pre-construction to the 2016 sale of the building to Invesco to the grand opening this year. “You design a building and get the construction team, go out and build it, but throughout that process – a 24-month cycle – there’s a lot of changes and clarifications that come along the way,” says Stone.

The team hit every curveball thrown at them. Stone worked with Saunders on the Triangle Building before 16 Chestnut. “They’re a great partner,” he says. Same goes for Gensler: “They’ve been great to work with.”

Infill development around Union Station was “a once-in-a-lifetime opportunity,” says Stone. “You’re never going to build the hub of a hub-and-spoke system ever again. I was thrilled to be a part of it.”

Due to ongoing job growth, he forecasts a bright future for Denver’s office market. “The office market in metro Denver and downtown Denver is driven by the appeal of the Denver area,” says Stone. “It probably won’t continue on the trajectory it’s on right now forever, but I can see good steady growth in the office market in Denver for years.”

“We’re getting to full buildout at Union Station,” he adds. “There will be other submarkets in the CBD that will benefit, but my crystal ball doesn’t tell me exactly where the market’s going to move.”

What’s next for East West? “We’ve got some things in the hopper, but nothing to announce as of right now,” answers Stone. “We’re always looking for new opportunities.”

Featured in the June 2018 issue of Building Dialogue.