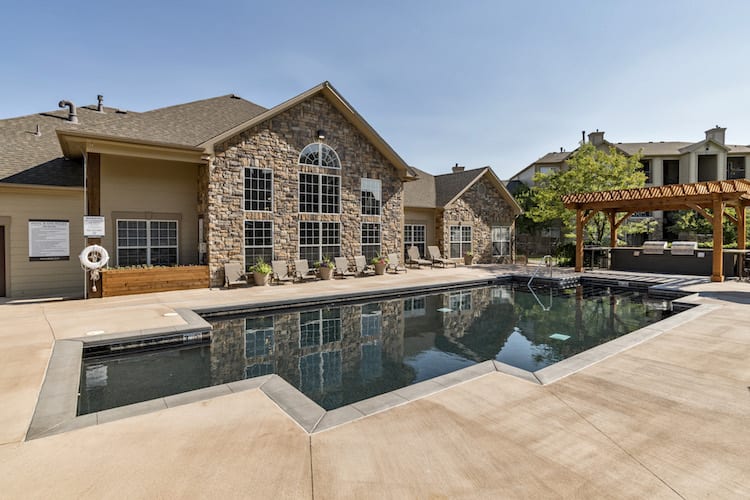 Alvista Harmony is just off the Harmony Road corridor.

A Fort Collins apartment community with large units, a like-new clubhouse and abundant amenities within reach was acquired for $63.5 million.

“You have everything you want about two minutes away – Safeway, King Soopers, Target – just tons of retail. Everything is right there,” said Shane Ozment of Newmark Knight Frank Multifamily.

“We had really good interest on the deal. Fort Collins is a hot market people really want to get in because it doesn’t see nearly the amount of transactions that we see in the metro,” said Ozment.

The seller spent more than $1.5 million upgrading unit interiors, and renovating the pool and clubhouse, which has wood beams and a “cool,” contemporary style. “It looked brand-new,” said Ozment, who represented the seller with NKF Multifamily’s Terrance Hunt, Andy Hellman and Justin Hunt.

About 32 percent of the units were upgraded, leaving the buyer the opportunity to renovate the rest of the units and increase rents.

“We are thrilled with the result of our first FMC exit, increasing property NOI by 21 percent since our purchase and realizing a 26 percent deal-level IRR for our investors over 2.5 years,” said Eric Mallon, a FMC founding principal. “This execution also speaks to the overall strength and diversity of the Fort Collins economy, which continues to drive national interest from investors.”

“In addition to modernizing the clubhouse and pool area, we added a new outdoor kitchen with pergola, installed Amazon package lockers, and built a new dog park,” said Chris Geer, another FMC founding principal. “We proved the viability of our original business plan, renovating roughly 32 percent of the units and achieving $125 per month premiums, leaving the next owner in a great position to finish out the project,” continued Geer. The scope of unit renovations included new cabinet fronts, granite overlay countertops, stainless appliances, vinyl plank flooring, carpet and new hardware, at an average per unit cost of $6,500, resulting in a 23 percent return on investment.

Alvista Harmony occupies 15 acres, so the density is low. The community was built in 1999.

Ozment said there is “huge demand” for properties built along the Front Range between about 1998 and 2002. “Those properties were built in A locations, they’re all low-density, mature landscaping, tons of open space, 9-foot ceilings, big units, so the drivers are really strong for those assets.”

“Institutional” buyers, or buyers backed by institutional capital, “really like these types of assets, and the reason is because they get a push on their IRRs; cap rates going in are low, but once they come in and do the renovations, their yields become pretty high.”

“They can come in and raise rents $200 and still be $100 or $150 below a brand-new deal that’s aesthetically not as nice looking,” he said, explaining construction costs have escalated to the point that exterior materials in new product may not be as attractive as those used in the ‘90s and early 2000s.

The apartments are across the street from a neighborhood park and near of major employers along the Harmony Road corridor.