Twenty-seven years ago, Jeannie Bernard accepted the executive vice president position for the Denver Metro Building Owners and Managers Association the week before Christmas. She inherited an organization with one full-time staff member and one part-time member to manage, fewer than 200 members, shaky financials and no reserves. “I thought, ‘I need to whip this thing into shape,’” she said.

Bernard was in the association management business – not in the commercial real estate business – when she accepted the position. She had a certified association executive designation and had been the executive vice president for eight years for an insurance and financial services industry association.

“I wasn’t looking for a new job,” she said. “But then I heard about this BOMA job, and I thought, ‘Well, what the heck? I’ll throw my hat in the ring.’ You never think you’re going to stay some place for a long time. I never dreamed I’d stay here this long.”

Her CAE background stood out to interviewers. “Her knowledge of association management and the questions she asked showed all of us on the committee how far we had to go in terms of expanding the services delivered to the association’s membership, developing advocacy programs and improving member education,” said Patrick Finé, who was Denver Metro BOMA board president at the time Bernard’s predecessor resigned and served as a member of the search committee for his replacement.

By her accounts, the first few months were rather bumpy and involved a staff change as well as a BOMA International meeting in Hawaii that January, which she and the incoming-BOMA president, Mark Best, attended. “It was the blind leading the blind,” she said. Best, as the incoming president, had no training and she hardly knew BOMA.

Best remembers it well, too. “We sat down over coffee and had that feeling a dog would have that just caught the car it was chasing … now what do we do? Obviously, Jeannie figured it out quickly and the rest is history.”

After the trip, she hired a new full-time employee, Sondra McCoy, who worked for Bernard for 24 years until retiring at the end of 2015. Her main priority was to get BOMA financially stable and start building reserves, which she did with the help of the treasurer at the time, Lyla Gambow, who hired Bernard’s husband, David, to help BOMA create a reserves policy. Then the city of Denver’s Building Department invited her to sit on the building department review committee. “Boy, did I learn a lot,” she said. “I didn’t come from real estate, so I had a big learning curve.”

She brought the office up to date with technology and increased the association’s PR efforts. “If they did a press release once a year to announce a new board or something, that was a lot,” she said. She introduced continuing education credits for the classes and seminars BOMA offered, which was new for the association.

“We just made a lot of strides those first couple years,” she said.

Once the finances and memberships started to grow, Bernard found more of her time being devoted to advocacy and legislative work.

“It’s the most important thing we do for the owners” because it saves them money, she said. BOMA Denver is the only real estate organization in the Denver area that has consistently worked on building codes, fire codes and other operational codes that directly impact building owners and managers in order to keep buildings operating safely and efficiently, she said. 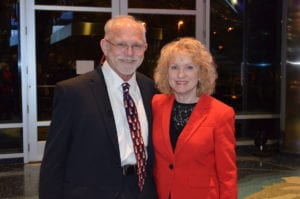 Bernard with her husband, David

In addition to a contracted state lobbyist, Bernard became a lobbyist. Later, she hired CRL Associates as a local lobbying firm, which represents BOMA in Denver and surrounding jurisdictions. She also signed BOMA up to be a member of the Colorado Energy Consumers Group, which works on utility-related issues at the PUC, an increasingly important issue as utilities are the second-highest expense in an office building. In addition, she formed the Colorado BOMA State Coalition between Denver Metro BOMA and the Colorado Springs chapter and instituted a state political action committee. At the national level, Bernard served as chair of the BOMA Association Executives Council and was a member of the BOMA International Executive Committee for two years.

“I’ve always enjoyed doing the advocacy work,” she said. “It’s the biggest part of my job.” But managing the organization keeps her busy as well. “I’m running a small business here,” she said. “It’s a not-for-profit corporation in Colorado and the oldest real estate organization in the state.” (Denver Metro BOMA will celebrate its 100thanniversary in 2020.)

Bernard has been at the front of one of the most distinctive office building issues in recent history: changing security and safety needs. In 1993, there was a bombing in the parking lot of the World Trade Center, which was a BOMA-member office building in New York City. Then the Alfred P. Murrah Federal Building in Oklahoma City was bombed in 1995, followed by the Sept. 11, 2001, the terrorist attack on the World Trade Center.

“The three major U.S. terrorist attacks, up until recently, happened in office buildings,” she said. BOMA International was ahead of the game because of the 1993 bombing, but 9/11 raised the awareness even more, she said. On the morning of 9/11, Denver’s Office of Emergency Management called Bernard and asked her to come down right away, putting her right on the frontline of Denver’s response.

In 2002, a BOMA International meeting was held in Washington, D.C. Bernard decided to accompany a BOMA member, Patrick Hilleary, to visit the WTC site in New York City before going to the meeting. While there, they visited NYC’s Office of Emergency Management and toured several Brookfield-owned properties surrounding the World Trade Center that had sustained damage in the attack. After the trip, Bernard was very involved in the formation of a state organization that later evolved into the Colorado Emergency Preparedness Partnership.

“It was BOMA who went to the OEM and said we should be doing something to inform our members more about what to do in case of a terrorist attack,” she said. “Now, it’s not just terrorist attacks; it’s active shooters and other kinds of attacks.”

This led to a full-scale disaster exercise in Republic Plaza later in 2003. The exercise included Denver police, SWAT, surrounding municipality police, mutual aid, hospitals, morgues, hazmat, the Federal Bureau of Investigation, the Department of Homeland Security, the Federal Protective Services, the Red Cross, the Salvation Army and over 140 BOMA members as volunteer victims.

Energy-efficiency is another area in which BOMA, and Bernard, has been a leader.

“Years before all of this became de-jour, BOMA International started the BOMA Energy Efficiency Project, a series of educational seminars that we could offer,” she said.

Denver Metro BOMA started a program in conjunction with the Downtown Denver  Partnership, the city of Denver, Denver Water and Xcel Energy called Watts to Water, which continues today, with BOMA the main sponsor now. The program, which benchmarks electricity and water use, is a departure from organizations across the nation because it includes water conservation.

“The building owners and managers have to look at this practically,” she said. “It’s very important to be energy efficient, to save water and to save the environment. But you also have to look at what’s realistic.”

With that in mind, the association keeps abreast of government affairs relating to sustainability. “I remember when one of the senators wanted to post Energy Star scores on a plaque in front of buildings,” she said. Sitting in his office, she remembers having to explain why it’s not as simple as just comparing one building to another. “One building might be 60 years old and another might be 5 years old,” she told him. “It’s apples and oranges.”

Other’s agree and credit Bernard with much of these energy-related successes. “I would say that some of the more meaningful accomplishments involved her dedication and work in advocating on BOMA members’ behalf with the PUC and Xcel Energy,” said Judy Anderson, a BOMA past-president, who became a long-time friend of Bernard’s. “Energy dollars are significant to building owners and her work together with BOMA members accomplished real dollar savings for many of us. Remember that Jeannie joined BOMA as an association executive – not an energy expert. But, she made herself an expert and BOMA members benefitted from her work.”

Other memorable events from her tenure included Denver Metro BOMA hosting two BOMA International conferences, one in 1995 and one in 2008; the “security nightmare” that was the Democratic National Convention in August 2008; and Y2K, which involved a lot of preparation and worry, with members even sleeping in their buildings. “Everyone was worried the world would stop,” Bernard said. “The world didn’t stop, we just changed the calendar.”

With a new executive vice president, Stephen Shephard, announced, and her last day, Dec. 31, 2018, quickly approaching, others are considering her legacy.

“I think the stability and reputation of Denver BOMA are her legacy,” Best said. “She stepped into a good organization, but one that needed a strong executive to lead an eclectic volunteer group. From Day One, she helped guide the group to be the best it could be. Today, the group has an incredibly strong financial base (thank you to David Bernard), a great staff and an impeccable reputation both locally and nationally.”

Finé agrees. “Jeannie was our advocate and defender and helped us to achieve goals that many thought were unachievable. She will be greatly missed.”

At the time of the interview, Bernard was finalizing the 2019 budget and getting things organized to hand off. The following week was Bernard’s 31stwedding anniversary with her husband, David. However, she was leaving for Chicago for a BOMA meeting that day.

“That’s happened a lot over the year,” she said. “For the first time in 35 years, I’m not going to have to worry about planning my family’s schedule/events/get togethers around BOMA’s – or any association’s – schedule. I’ve done that for all these year. I’m so over that.” 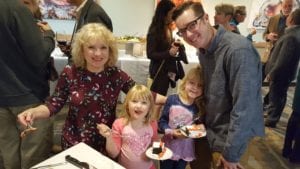 Bernard with her son, Nick, and two of her grandchildren and her retirement party

With all six children from a blended family and 13 grandchildren living in Colorado, Bernard’s retirement plans don’t sound too laid back. “I’ll be very active with our large family,” she said. “I’m not babysitting full time, I’m not that kind of person, but I will help a lot when I can.”

Traveling to visit friends and family back in the mid-Atlantic is enticing, but jet-setting to remote destinations isn’t high on the list. After 35 years of traveling for work, “I’m so darn sick of traveling,” she said.

Others remember her dedication as well. “She will cringe when I mention this, but her commitment and dedication to the organization saw her traveling to business meetings and conventions when she probably should have been resting – appendicitis, migraines, broken ribs and a shoulder problem,” Anderson said. “She has always been a trouper.”

Aside from being a hands-on, doting grandmother, she’ll help her husband with his business when needed and house projects await. Her two dogs, Zoe and Sam, will be showered with even more attention as well. While she’s been approached about other opportunities, she plans to take some time to relax and think about everything.

“I’ve been very devoted to my job,” she said. “I’ve worked very hard. I’m that kind of person. I really feel like I’ve helped tremendously to make BOMA successful over the years. A lot of people say, ‘What’s BOMA going to be without you?’ and I say, ‘They’re going to be just fine.’ Change is good. My replacement, Stephen Shepard, has BOMA experience and will carry on. I’m leaving on a high note.”