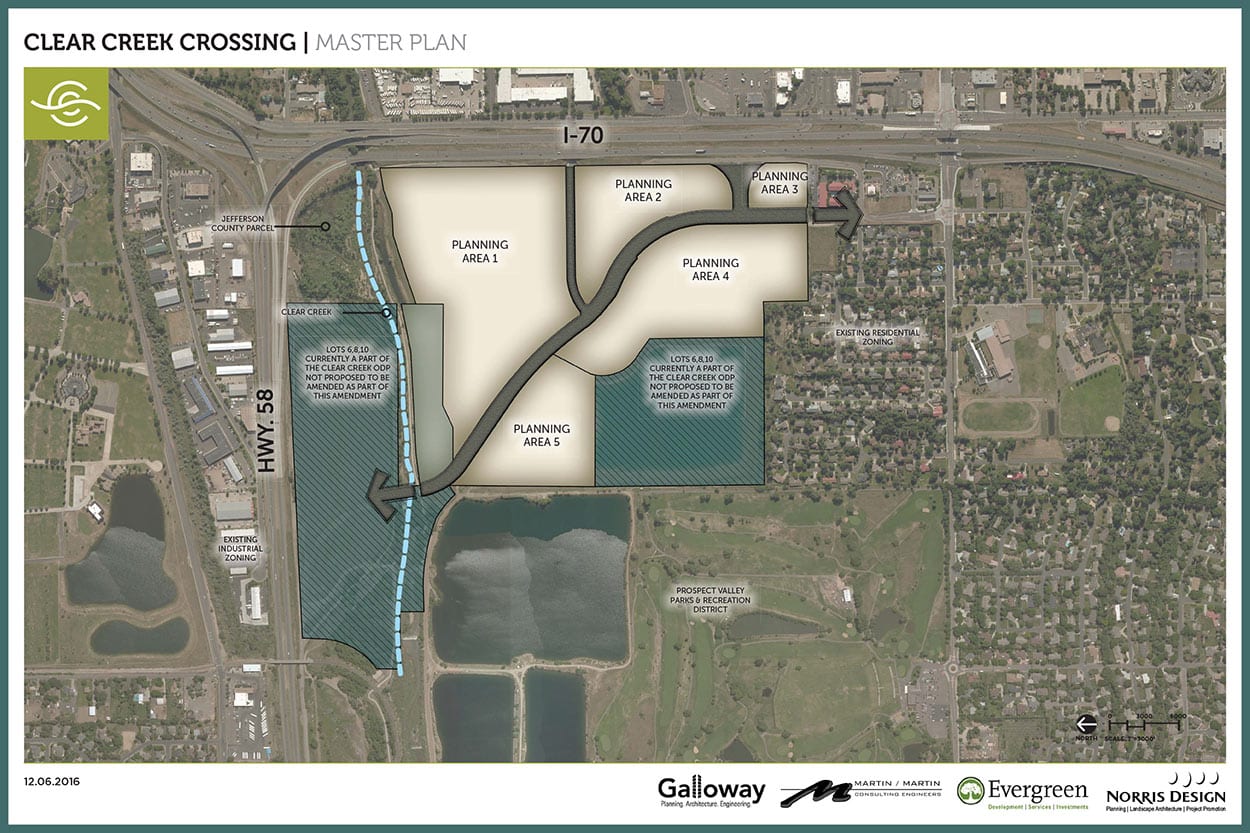 Evergreen Development plans a mixed-use development on a key site it purchased in Wheat Ridge.

When Tyler Carlson, who heads the Denver office for Phoenix-based Evergreen Devco Inc., approached Cabela’s in the spring of 2015 about buying the prime, but underutilized 108-acre site in Wheat Ridge, he knew that it wouldn’t be developed into a retail center, as the hunting, fishing and camping giant had envisioned a decade earlier.

“Cabela’s tried to do a 100 percent retail center with a total of a million square feet about a decade ago, but we did not think that was the highest and best use of the property. And we don’t think the market agrees with a retail-only center for that site,” said Carlson, a principal of Evergreen Devco.

Last month, Evergreen Devco paid a total of $11.6 million for the Clear Creek Crossing site at Interstate 70 and Highway 58.

It paid $10 million to Cabela’s for about 75 acres and $1.6 million to Jefferson County for an additional, adjacent 33 acres. Cabela’s initially bought the property in 2005, but when the real estate market and economy crashed, it officially pulled the plug on its plans in 2011.

About seven acres of the Jefferson County land will not be redeveloped and will remain as open space and used for water retention.

Evergreen Devco put the property under contract in the summer of 2015.

“We knew at the time that it needed to be a true mixed-use community, where you can truly live, work and play,” Carlson said.

During more than a year of due diligence, he decided not only would it be a mixed-use community with offices, apartments and hotels, but also it would even scale back the amount of retail it initially planned to include.

“For the long-term sustainability of the community, we found through our discussions with market and planning people, city officials and neighbors, it ended up the highest and best use is to have even less retail and make it a true well-rounded, mixed-use community,” he said.

While the land still needs to be rezoned, Clear Creek Crossing will likely end up being about a third retail, a third employment based in a new office campus, 15 percent multifamily and 15 percent hospitality.

“We will be spending most of 2017 working with the city of Wheat Ridge on the zoning, planning and engineering and commence construction by the beginning of 2018,” he said.

Although details are still being worked out, he thinks most of the retail buildings will have one-story, although he expects rooftop dining for restaurants. Other buildings likely will have more than three or four stories, he expects.

The anchor retail center likely will be a 190,000-sf Walmart Supercenter, to replace the smaller Walmart across the street, which is long in the tooth.

Indeed, a new Walmart was envisioned for the site even when Cabela’s first bought the property in 2005.

One of the more exciting prospects at Clear Creek Crossing is the potential for a large office campus on the north end of the property.

“A large employer has expressed interest in a (office) campus there,” Carlson said.

The user, if the deal were consummated, would buy 25 to 35 acres of the site, according to Patrick Goff, the city manger for Wheat Ridge.

“That would be very exciting as far as job creation,” Goff said.

The company asked not to have its identity revealed until the deal is certain. Carlson would not even say whether it is a company with a presence in the metro area or whether it would be new to the area. He also declined to reveal the industry of the business.

If that deal does not come together, “A number of other office and research type of developers have expressed interest in that site and we would probably sell the land to another developer,” Carlson said.

Evergreen Devco does not develop office buildings, although it does construct retail centers and apartment buildings.

Indeed, it owns about two dozen sites in the Denver area, many of them grocery-anchored centers, although this is its single-largest development in the metro area.

“We have done similarly sized projects in the Phoenix area, where we are based,” Carlson said.

In the spring, for example, it plans to open a project in Stapleton’s Eastbridge Town Center, next to a new King Soopers.

When completed, Clear Creek Crossing is anticipated to generate $600,000 in tax revenues in the first year, which will rise to $1.3 million, Goff said.

“That is about the same as Cabela’s would have generated,” Goff said.

Even though retail generates more sales tax revenues than office or apartments, Wheat Ridge will keep more of the sales tax generated under the new ownership than it would have under the deal with Cabela’s, Goff said.

Carlson said a big reason that a retail-only development no longer makes sense because so much retail is now purchased online today.

“Small shops and restaurants in an entertainment district makes more sense,” he said.

He also noted that access to Clear Creek Crossing will be improved with new “hook ramps” off Interstate 70 and a flyover ramp to Colorado 58, as well as improvements along West 32nd Avenue.

“This is obviously a phenomenal site, with high visibility from I-70 and State Highway 58,” Carlson said.

“And with the new interchanges and improvements along 32nd, it will dramatically change how traffic flows,” Carlson said.

“The new off ramps will go right into our property, which is a really exciting.”

The west side of the metro area has strong demographics and big barriers to entry, he noted.

“The west side’s growth is constrained by the lack of developable land, so an opportunity like this is pretty rare,” Carlson said.

Demand is strong on the west side from retailers, office users and renters, because it is easy to get to downtown Denver, as well as giving you a head start if you are heading to the mountains, he noted.

Carlson has had one meeting with neighbors so far.

“It seemed really well received by the neighbors,” Goff said.

Clear Creek Crossing will not be like a smaller Belmar, although it will have many of the same components.

“We are not going to have the same urban density as a Belmar,” Carlson said.

“Belmar is in the middle of metro Denver, Lakewood and the West Denver area, so it merits that kind of density,” Carlson said.

“Our site will still have an urban feel, but will have a lot of open space and will not be nearly as dense as Belmar,” he said.

“Lower density is better for traffic and makes us a better neighbor to the nearby residential neighborhoods.”