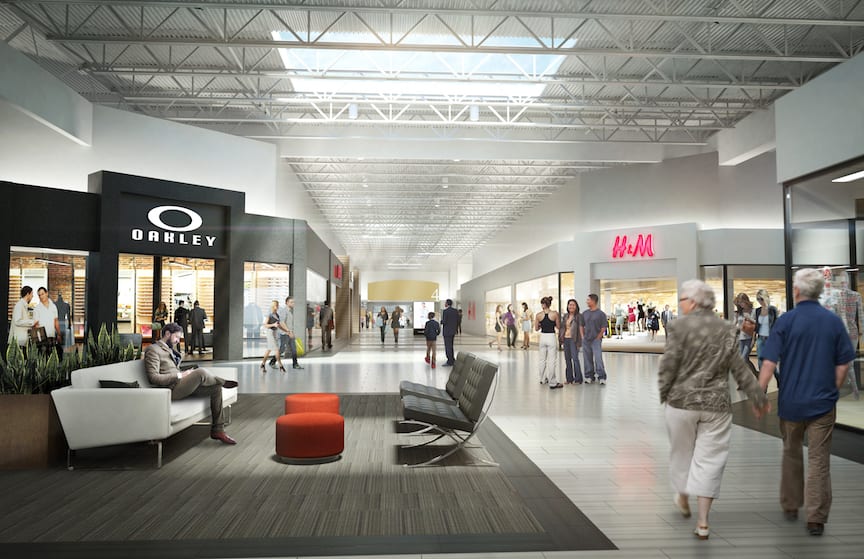 As flooring, ceiling tiles, roofing and drywall all needed to be replaced, the reopened Colorado Mills features a refreshed, contemporary look while still preserving some of its legacy features. Courtesy The Beck Group

When golf-ball-sized hail hit Lakewood and the surrounding areas May 8, the storm shattered records as the costliest hailstorm in the state’s history, with auto and home insurance claims of $1.4 billion, according to the Rocky Mountain Insurance Information Association. One of the most publicized structures damaged was Colorado Mills, a 1.1 million-square-foot shopping center near Interstate 70 West and Sixth Avenue. Many recall the viral videos of the flooding.

“Colorado Mills sustained extensive damage to the entire center from a historic hailstorm,” said Les Morris, spokesperson for Simon Property Group, which owns the shopping center. “Subsequent to the storm, the center evacuated and closed its doors to the public while multimonth restoration work took place.”

Immediately following the storm, Simon Property Group assessed the damage and hired a company to handle cleanup. Simon, a publicly traded company, which owns retail properties in 37 U.S. states and Puerto Rico, declined to comment on the cost of the damage.

Once the cleanup was completed, Simon partnered with The Beck Group, an integrated architecture and construction firm, to manage the project and design-build teams.

Nine months later, the majority of Colorado Mills is open, and crews are wrapping up a massive construction project that required, at times, more than 550 tradesmen.

In the span of roughly four months, from when new construction started July 31 to the majority of the mall reopening on Nov. 21, the scope and pace of the project was unprecedented. Compared to a standard project of this size, John Chisholm, Denver’s operations manager with The Beck Group and the integrated project leader for the Colorado Mills restoration project, estimates that the work was finished in half the time typically required.

The biggest challenge from a project management perspective was securing the manpower, he said. They needed to get enough tradesmen to the site at a very quick pace in order to meet the project’s outlined goal to be reopened before Black Friday. Not only were they dealing with an extremely tight construction labor market, but also the project required work in practically every part of the retail center. The most in-demand trade: drywallers. At times, there were over 350 drywallers on site, he said.

At the busiest times of the project, from August through the mall’s reopening, there were more than 550 workers on site. Overseeing all of that was a team of about 18 supervisors, project managers and safety crew members. Since reopening in November, the numbers have come down quite a bit, but there still are crews on-site finishing the project, Chisholm said. 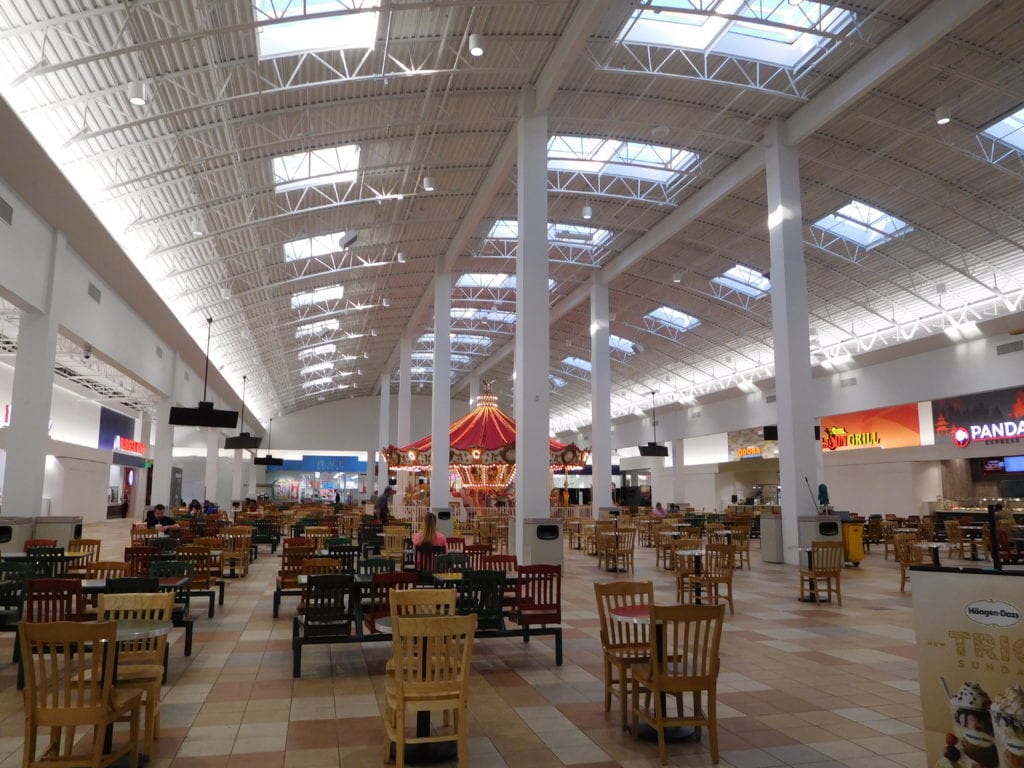 Remarkably, of the more than 100 skylights in the mall, only four had to be replaced.

After the storm, a temporary roof was immediately deployed. A permanent new roof is now nearing completion; it features a better hail protection system than the original 2002 roof. Remarkably, only four of the more than 100 original skylights were damaged and needed to be replaced.

The interior of the mall is nearing completion as well, with flooring in the common areas accounting for the final step. The original wood, carpet and concrete floors are being replaced with tile and carpet, along with a few designated polished concrete sections, Chisholm said.

“Work on the common areas will continue during evening hours extending into 2018, and more retailers will open during this timeline,” Morris said. “As a result of the storm restoration, the new concept for Colorado Mills will provide a refreshed, contemporary look while still preserving some of its legacy features.”

Between the common areas and tenant spaces, the construction crews hung over 200,000 sheets of drywall, replaced more than 12,435 light fixtures, replaced 100,000 ceiling tiles and painted more than 7.5 million sf of wall space, according to The Beck Group.

The exterior of the shopping center will be the final step in the restoration project. This will ramp up as the weather gets nicer and is slated to be completed by the second quarter, Chisholm said.

The shopping center owner was thrilled to reopen with the support of more than 100 stores and eateries, which have been opening on a rolling basis since Nov. 21, Morris said. “As the largest outlet and value retail shopping destination in the state, additional retailers will open throughout 2018 to return us to prestorm occupancy closer to 200 stores and restaurants,” he said.

Several of the tenants with exterior entrances reopened earlier than Nov. 21 – with the SuperTarget and the United Artist movie theater leading the pack. Meanwhile, a few interior tenants opted to take the time to do a full redesign and have yet to open. The center’s website and social media accounts share more information on which tenants are open.

All said, the timeline from the closing to reopening is something with which everyone is proud to be associated.

“Our team at Simon and Colorado Mills worked incredibly hard to reopen the center and continues to be dedicated every day,” Morris said. “We are so grateful to our team, partners and community for working with us through this process. We look forward to holding a celebration once all work is complete.”

One silver lining coming from the project is realizing what can be accomplished when you put your mind to something. “We got a lot of work done in a really short amount of time,” said Chisholm. “We – the Beck team and the 500-plus trade workers who were working their tails off out here – were all amazed by what we accomplished.”