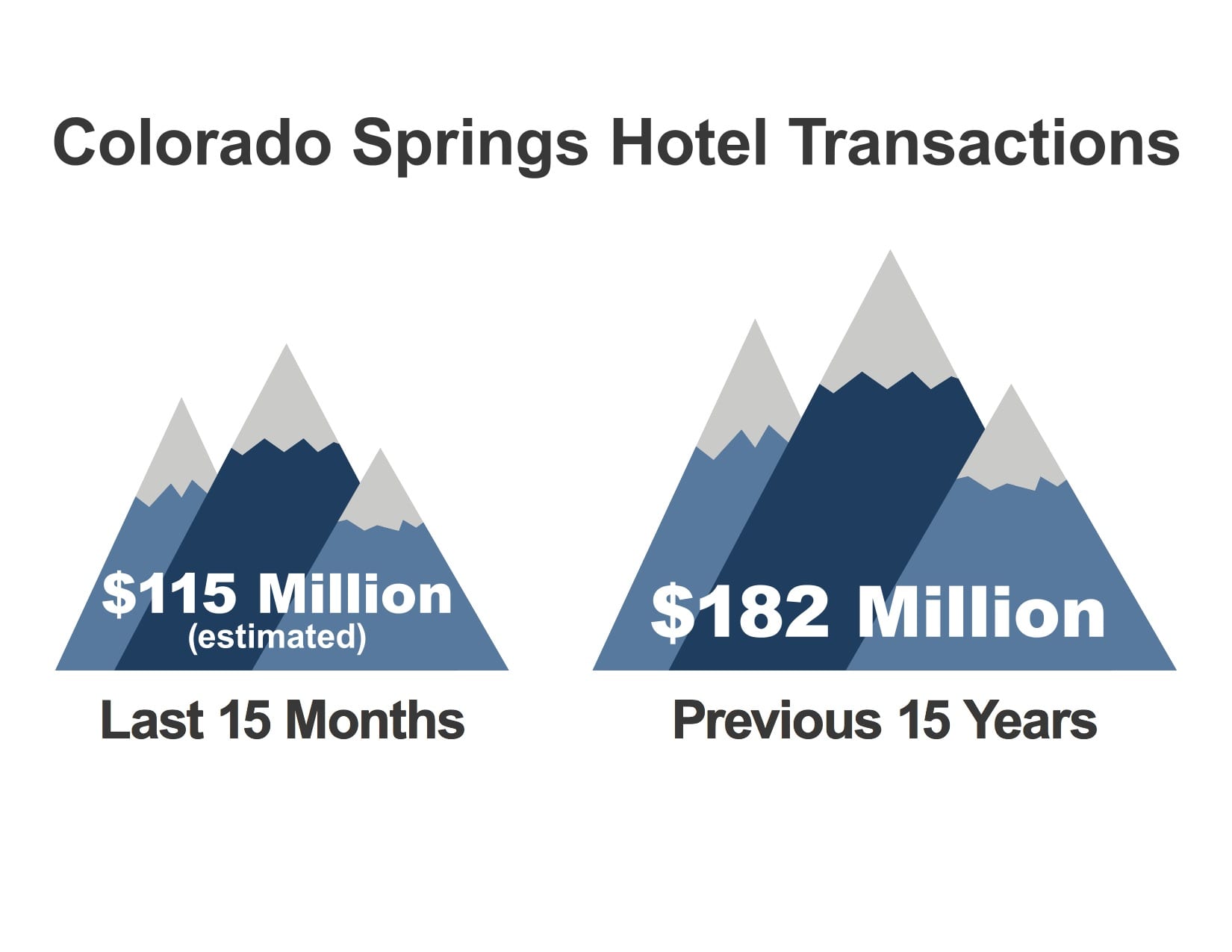 Colorado Springs is in the midst of its best ever performing hotel market, on the heels of a summer of record high occupancies and room rates.

Colorado Springs is in the midst of its best ever performing hotel market, on the heels of a summer of record high occupancies and room rates. Not surprisingly, with the industry fundamentals so strong as a result of consumer demand for lodging accommodations, the climate for hotel acquisitions in the area also has reached record levels. Let’s look at the various factors that are the driving forces behind both trends.

It’s helpful to place the Colorado Springs market into context with the Denver market, as the evolution of the Springs in terms of hotel real estate investment, overall tourism and macroeconomic factors is relevant to what’s happening in Colorado’s largest metro area to the north.

Denver background. Beginning with the 2013 purchase by Inland American REIT of the Hotel Monaco at a then record price per room of nearly $397,000, the hotel investment landscape in Denver and now, more recently, Colorado Springs has undergone a fundamental change regarding its position on the radar of national investors. Institutional investors that previously were focused solely on coastal gateway markets began to view Denver in a more favorable light as it cracked the top 20 metropolitan statistical areas list in the early 2010s. The Union Station redevelopment, the Gaylord Rockies project and Colorado Front Range cities’ diversifying economies and recognition on many “best-of” lists created an awareness by the institutional and large private equity firms of the exceptional growth in asset values and “good buys” that could be had relative to more established markets in other parts of the country.

However, the comparatively smaller size of the Denver hotel market has not allowed for many large-scale asset-based acquisitions in the hotel sector. Yet further evidence of Denver’s institutional attractiveness can be seen in the transactions in the graph below.

These transactions created lots of opportunities for investors from around the country to become familiar with Denver. As many of them lost the bidding war for Denver deals, they began to look elsewhere – and took their checkbooks for a ride down Interstate 25.

The spillover effect. As Denver’s well-publicized economic boom and corresponding surge in real estate development has resulted in increasingly higher commercial and residential rents, construction costs and commercial property transaction values across all asset classes, Colorado Springs has quietly generated its own expansion.

While Colorado Springs’ primary industries have historically been military- and government-related, which has limited hotel room rate growth due to government per diems, what is different now is the transformative shift in its economic base with a variety of private sector investments and public-private partnerships that is driving development throughout the area. Projects such as the City For Champions, Sierra Nevada Corp.’s Sierra Completions hangar at the airport and the Innovation District downtown reflect a diversity of economic development that previously hasn’t occurred here. Anecdotally, commercial real estate investors and residents alike are finding better real estate values for the money and a less costly operating environment in the Springs while still enjoying the Colorado quality of life that is making the Front Range a mecca for inmigration.

Colorado Springs has been steadily improving since the national recession in 2008-2009, adding 7,400 jobs in 2015, more than any year since 2000. With an unemployment rate hovering around 4 percent, job growth is occurring in health care, leisure, business and professional services, retailing, transportation and utilities industries. A variety of economist studies and forecasts indicate continuing strengthening of job growth, housing starts, commercial real estate development and population increases.

Colorado Springs is experiencing broad-based growth in hotel demand across the commercial transient, corporate and association group and, significantly, the leisure market, segments. The region is a tourist mecca, attracting over 4 million visitors annually. Tourism has recovered significantly since the natural occurrences in the summers of 2012 (wildfires) and 2013 (floods). With the 10 percent increase in Front Range population combined with the Colorado Tourism Board’s well funded marketing program, the greater Colorado Springs tourism growth is consistent with many areas around Colorado. Specifically, the summer of 2016 marked the high point of Colorado Springs hotel performance, with a spectacular 18 percent RevPAR increase year over year for the June to August 2016 period.

Such metrics in the lodging industry are signs of good health, and investors took notice in 2015 with the sale of the (former Hilton) Antlers and the Doubletree, whose buyers are expected to invest millions in additional dollars to renovate the properties.

In addition, one of the strongest signals of the hotel market recovery was the sale in mid-2015 of the partially constructed 300-room Renaissance Hotel and Conference Center to Great Wolf Lodge. The acquisition by Great Wolf, a premier player in the hotel and waterpark sector, evidences the acknowledgement, by a national institutional investor/operator, of the depth of market demand and economic fundamentals in the area. The fall 2016 completion of this property, which has been shuttered since 2009, portends a new era in the Colorado Springs tourism landscape.

Many factors have combined with the record improvement in Colorado Springs hotel market fundamentals to create this recent surge in investment activity, with over $70 million of transactions occurring since July 2015, with another $45 million currently pending. To put this in perspective, in the previous 15 years only $182 million of hotel deals were closed.

With some $115 million in transactions closed and in the pipeline in the last 15 months, clearly Colorado Springs appears to have come of age with the national investment community. With all the good news on the economic, investment and tourism fronts can the appearance of that species of “bird” known as the construction crane be far behind?