Around 6 million square feet of industrial space will be delivered this year. 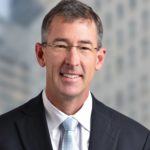 “Lower for longer” and “growing but slowing” have been used to describe the direction of the economy and commercial real estate market in 2020. But are these just catchy phrases used by optimistic economists and brokers, or are they describing a new reality?

Historically people have looked toward the past in an effort to identify patterns that could predict the future. For example, over the last 50 years, seven recessions have occurred and an inverted yield curve has preceded each one by an average of 14 months. Thus, when the yield (spread between the 10-year and two-year Treasury rate) inverted briefly last year, a feeling of angst filled the air.

Because the U.S. economy entered its second decade of growth, officially making this the longest expansion in history, many people feel the market is due for a correction for no other reason than we’ve never gone this long without one. This is known as the Monte Carlo, or gambler’s, fallacy, which is the erroneous belief that if a particular event occurs more frequently than normal during the past, it is less likely to happen in the future.

In theory, economic expansions can go on and on without a contraction, as evidenced by Australia’s current 28-year expansion. From a market fundamentals standpoint, the economy is in relatively good shape. Gross domestic product remains positive, interest rates are low and wages are rising, albeit at a slower pace than one would expect for a cycle this long. In addition, consumer confidence remains high as the S&P 500 gained over 25% last year and the unemployment rate both locally and nationally are at record lows.

Therefore, the idea that the economy has more gas in the tank and can continue along its positive trajectory, despite the fact that we’ve entered unchartered territory, has merit.

Nationally, economic growth is expected to slow as the GDP rate is forecasted to decelerate from about 2% to 1.8% growth. A tightening labor market, a tapering of business investment and an array of geopolitical uncertainties ranging from a presidential election year to rising tensions in the Middle East to unresolved tariff disputes with multiple trading partners continue to weigh on the shoulders of this historic expansion.

Locally, additional challenges loom on the horizon, with geopolitical uncertainties at the forefront. Other headwinds include legislative pressures on fracking and its impact on oil and gas, traffic congestion, affordable housing concerns and surging property taxes.

Positive net migration, job growth, rising wages, low interest rates and an ample supply of capital are the primary drivers for a successful real estate market, and nowhere else in the country is a market firing on all of those cylinders like Denver.

As we head into an election year, we expect that significant business decisions will be delayed whenever possible. Still, the commercial real estate market is expected to benefit from the vibrant local economy as market fundamentals remain strong throughout all product types, with multifamily and industrial properties leading the way.

An unprecedented level of liquidity in the debt and equity markets, coupled with low interest rates in the United States and negative yields in several key global markets, have blended together to create a dynamic investment arena. With a limited supply of deals brought to market, cap rate compression will continue and deals will be aggressively pursued; particularly central business district office, industrial and multifamily properties.

• Demand for value-add assets will increase as yields for core product decline.

• Cross-border investments will increase by 15%, bucking a negative trend in coastal cities.

• The industrial market will be the first product type to experience a sub 4% cap rate.

Bolstered by a wave of West Coast companies seeking relief from governmental policies, taxation and a high cost of living, vacancy rates in the metro area continued their year-over-year descent. Industry instability in the oil and gas sector coupled with WeWork’s murky future could lead to some sizeable blocks of space coming back to the market in downtown. However, with strong demand from tech tenants, these spaces are not expected to be on the market long.

• Concessions will be few and far between as landlords remain in control.

• Less than half of the 4 million square feet proposed in River North will come out of the ground.

The rise in online shopping has spurred the growth of last mile logistics in the industrial market. Amazon continues to aggressively expand as the expectations of two-hour deliveries becomes mainstream. While only half of the 7 million-plus sf delivered to the market in 2019 was absorbed and an additional 5.7 million sf is under construction, the supply constrained market will welcome the additional space.

• Amazon will expand its footprint by 60%, to 4 million plus sf.

• Drone delivery and autonomous trucking will make significant advancements, but remain a few years away from being transformational to the industry.

Positive net migration, new housing starts, and strong consumer confidence paved the way for retailer success. While the wave of national store closures pushed the local absorption rate into negative territory for the first time in over a decade, the market continues to remain vibrant as food, fitness and entertainment businesses drive demand.

• Digitally native brands will increase their appetite for brick-and-mortar locations.

• Fitness and local pet suppliers will be the next industries facing contraction. 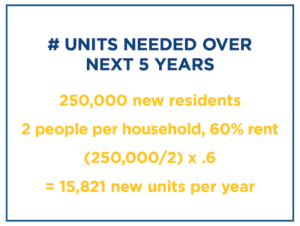 U.S. News & World Report ranked Denver as the second-best city to live in, just behind Austin, Texas. With a vibrant employment market and rising home prices, leasing activity will remain strong with the overall vacancy rate hovering around 5%. An unparalleled quality of life and strong economic fundamentals will keep Denver at the top of the list for new residents and investors.

• 80,000 new units will need to be delivered over the next five years to keep up with demand.

• Cap rates will stabilize in core assets. As a result, activity in value-add properties will be aggressive.

• Tier 2/3 locations like Colorado Springs, Greeley and mountain towns will see an uptick in investor activity as supply remains constricted in the metro area.

• Activity from New York, Oregon and California will increase as rent control measures have reduced the value of those units.

Denver is well-positioned to continue to grow and insulate itself in the event of a deep and long national market contraction. Denver’s evolution toward a diversified employment base over the past two decades allowed it to be one of the last markets to feel the negative effects of the 2007-2009 recession and one of the first markets to climb out of it. Going forward should be no different, as positive net migration and strong job growth will afford Denver’s broad-based and dynamic economy a soft landing if and when the time comes.

Until then, it would behoove us to embrace this new market dynamic of moderated yet sustainable growth.