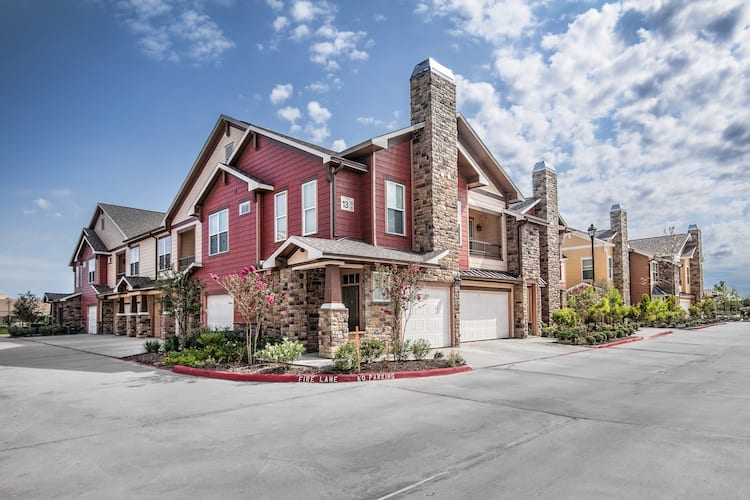 Most of the apartments at Caliber at Flatirons will be located within 18 Humphreys & Partners-designed “Big House” buildings.

A new apartment community on the U.S. Highway 36 corridor will feel a lot like a single-family neighborhood, and its developer is taking steps to ensure it’s a good neighbor – particularly to one specific resident.

The Garrett Cos. will break ground in the second quarter on Caliber at Flatirons, a 288-unit community on approximately 16.3 acres off the southeast corner of the Northwest Parkway and Via Varra in Broomfield. Most of the units will be flats in two-story, 10-unit buildings with private entrances, direct-access garages, walkout patios and balconies – a product trademarked by Dallas-based Humphreys & Partners Architects. There also will be a 100-unit, four-story building, and highly amenitized clubhouse resembling a high-end home.

“The location is superb,” said The Garrett Cos. Chief Operating Officer Matt Griffin. “It’s extremely visible. It’s located right there in the heart of the tech corridor. It’s got great access, it’s near great schools, great shopping. There’s just a ton of high-end jobs. Those are the criteria we look for for new sites,” he said.

In addition, “We actually really enjoy the fact that we’re among a large number of townhomes and condos out there. I think being in that vicinity makes it live more residential than commercial. You’ve got the benefit of having a quiet place to live, but you’re still close to work.”

In Caliber’s case, you’re also across the railroad tracks from the nest of a “very celebrated” eagle, whose presence necessitated developer accommodations.

“It’s been a little bit of a learning curve, but we’ve done a lot of things that I’m really proud of,” said Griffin. “We actually redesigned our entire site to get buildings farther away from the eagle,” he said, adding the first “structure” to go up on the site will be a sound wall constructed of straw bales to mask sound from construction equipment.

The bird also will be monitored during construction, with a wildlife biologist on hand during nesting season, to make sure the eagle isn’t unduly disturbed. In addition, The Garrett Cos. is making a donation to a Broomfield-based raptor rehabilitation organization.

The approximately $60 million Caliber at Flatirons, which will take 18 to 20 months to fully build out, represents The Garrett Cos.’ top-tier apartment product. 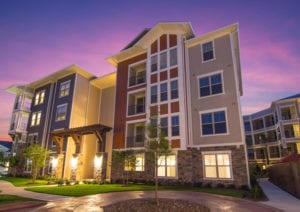 There also will be a four-story, 100-unit building.

“We’re underwriting it per market rents, but because we are offering what we believe is superior product – these small, 10-unit buildings that live very privately, with attached garages – we think we’ll be able to climb those rents,” Griffin said.

Each unit will have either granite or quartz countertops, hard-surface flooring throughout the living space, an upgraded appliance package, pendant lighting and upgraded plumbing fixtures, for instance.

“The units are designed in a way to really be more in line with a single-family home living experience,” said Griffin. “We’re really shooting for renters by choice.”

The clubhouse will have a “well-appointed” 24/7 fitness facility with a yoga room, game room and a community kitchen. There will be a resort-style swimming pool and spa with a sun deck, cabanas and fire pits.

“The city of Broomfield requires us to do a pretty large trail system that goes around our development. The cool thing is those trails actually plug into existing trails that were put in before us … We think that’s a huge amenity,” Griffin said, adding residents will be able to ride their bikes to various destinations, including the U.S. 36 and Flatiron transit station.

There will be a mix of 43 percent one-bedroom, 40 percent two-bedroom and 17 percent three-bedroom apartments with an average unit size around 950 to 1,020 square feet.

Indiana-based The Garrett Cos. will be the general contractor, managing primarily local subcontractors.

The Garrett Cos. develops multifamily properties in six states. It currently has 1,544 units in leasing, 1,021 units in five projects that will be underway within the next 90 days (including Caliber at Flatirons) and 750 units in four projects slated to break ground by year-end.

In Colorado, the company is growing it presence with the 164-unit Caliber at Hyland Village in Westminster, which is in preleasing; The Meadows Luxury Apartments, a 240-unit community nearly completed in Castle Rock; and Caliber at Cornerstar, a 150-unit development under construction in Aurora. At the same time as it gets underway on Caliber at Flatirons, it will be starting construction on a community in Colorado Springs.

“These submarkets within the Denver market hit all of our criteria that we search for. We’re looking for great school systems, strong growth in the job market, very strong single-family residential home prices and proximity to great, growing retail,” said Griffin.

“Multifamily seems to be in very high demand, and the rents are very insulated from market aberrations right now, so we love it. It’s a perfect market for us, and it seems like it will have a very strong future in the next decade, two decades,” he said.