That is where we began our tour of the Tennyson Street corridor between West 44thAvenue and 38thAvenue.

It’s six blocks that formerly housed low-rise brick buildings and older homes that increasingly have been replaced – and often overshadowed – by much larger new buildings.

Espinoza won an unprecedented and historic victory in Denver’s District 1 when he defeated incumbent Susan Shepherd with 68.6% of the votes in 2015. He walked away from an almost guaranteed second term by not seeking re-elecion. He didn’t run again because he felt he could accomplish more on urban planning and neighborhood issues, such as helping to implement overlay districts, as a private citizen than as a council member.

Espinoza, an architect by training

Espinoza is believed to be the first and only architect ever elected to the Denver City Council.

I asked Espinoza if looking at buildings with an architect’s eye gives him insights that may go unnoticed by others.

For this column, I wanted Espinoza to opine on what he sees as the good, the bad and the ugly along Tennyson Street. I thought his perception of Tennyson Street’s evolution resonates far beyond that commercial corridor in the Berkeley neighborhoods. 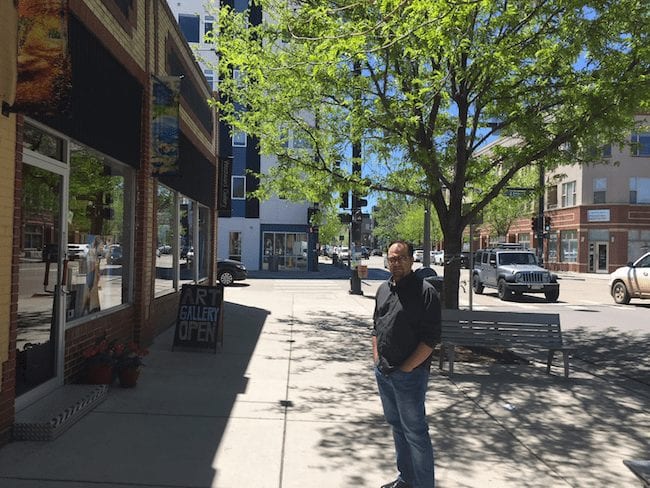 Councilman Rafael Espinoza doesn’t like that the apartment building in the background doesn’t have any setback from the sidewalk.

That’s because with its  quickly changing urban fabric, Tennyson Street could stand as a proxy for what is happening in Denver’s hottest neighborhoods.

Before we began walking on the Friday morning before the Memorial Day weekend, I asked Espinoza to put Tennyson Street into context.

“It’s a good model for what not to do,” Espinoza said.

“Unfortunately, it’s been sort of the guinea pig of bad zoning consequences.”

Most prominently, Tennyson Street is arguably ground zero of so-called slot homes. Slot homes are sideways-facing homes that allow the maximum number of units to be built on small lots.

Slots homes were so controversial and despised that the City Council unanimously banned construction of them  about a year ago. However, there are a number of slot homes still being built on Tennyson Street because they were in the works before they were outlawed. 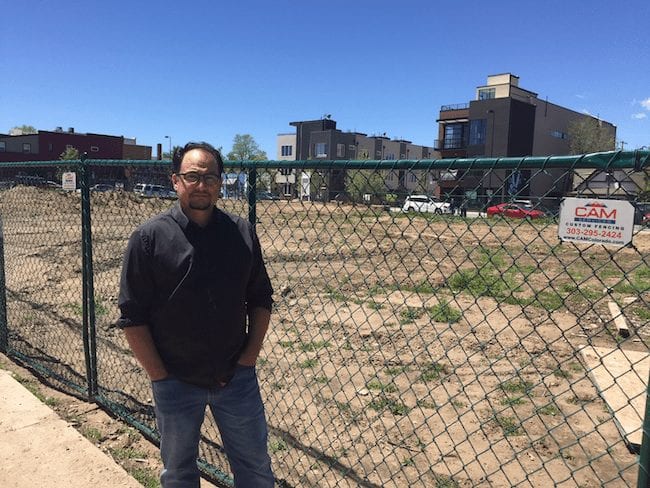 “I get concerned when I walk along Tennyson Street and know that more slot homes are coming,” Espinoza said.

And it’s not just slot homes.

More generally, Espinoza would like the city to take a more “surgical and strategic,” look at requiring “ground-floor activation,” in apartments along Tennyson and elsewhere in the city.

By ground-floor activation, he means requiring commercial uses, whether retail or a restaurant, on the ground floor.

Indeed, one of the fundamental problems with the zoning along a corridor like Tennyson is that the new buildings are largely residential, not commercial, according to Espinoza.

While bringing more people along a corridor at first blush may seem like a good thing, there needs to be a balance, Espinoza argues.

Indeed, one of the drawbacks of new construction that is largely residential is that it deprives the city of tax revenues, he explained.

Under the Gallagher Amendment, 55% of property taxes must be paid by owners of commercial properties. Apartments are considered residential properties, not commercial buildings. 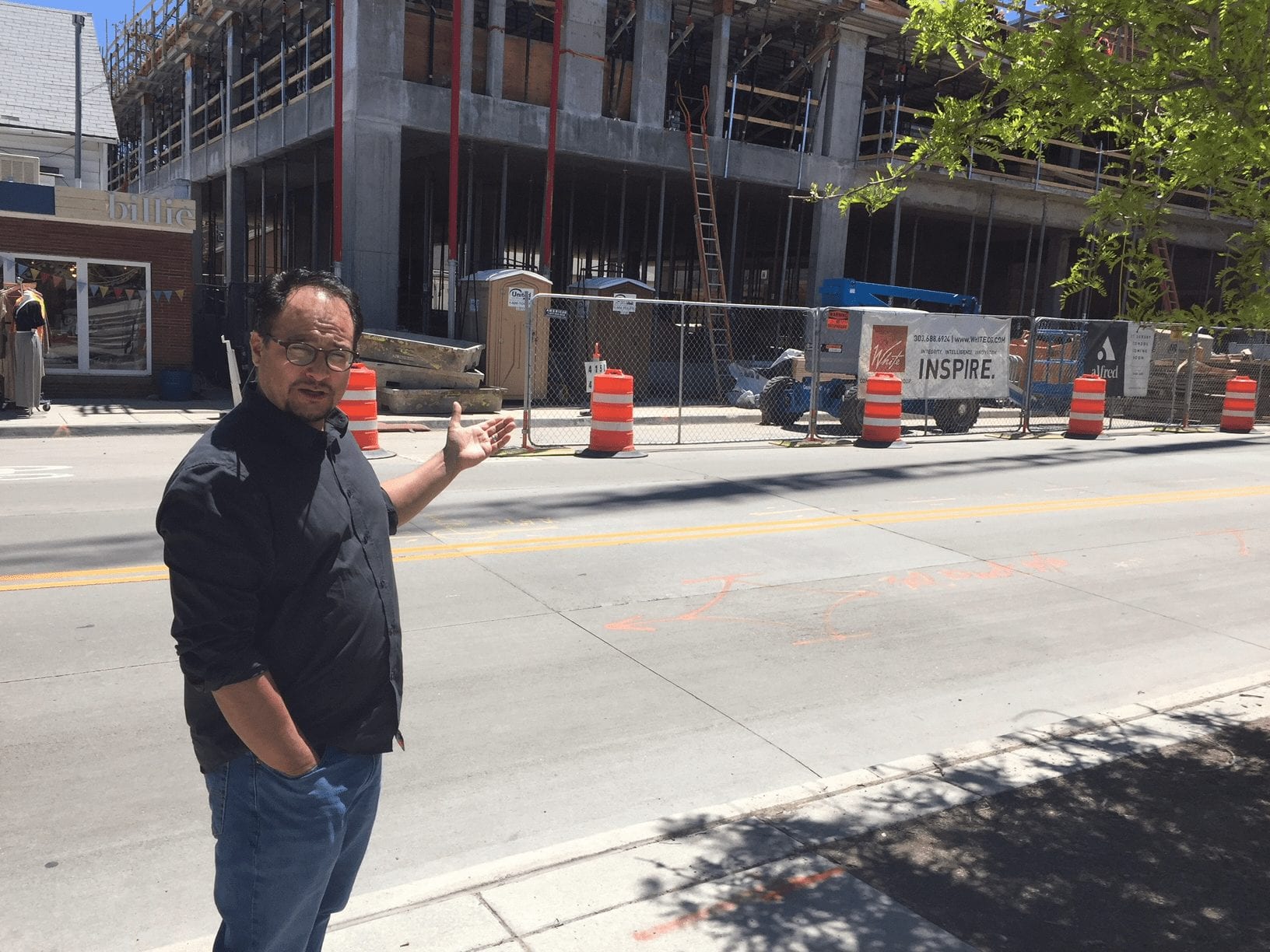 Councilman Rafael Espinoza likes what he has seen so far on this mixed-use building under construction along Tennyson Street.

Walking down Tennyson, he pointed to what he thinks is one especially flawed apartment building.

The building itself is flush with the sidewalk, with no setback. That is allowed under Main Street zoning. But while it might make sense for a commercial buildings that are enticing shoppers, it doesn’t work well for a residential building, he believes.

Espinoza was elected, in large part, as part of anti-development wave.

But that’s not accurate, according to Espinoza.

“I want to make it very clear that I do not blame developers for taking advantage of city rules,” Espinoza said.

Rather, he said, an unintended consequence of form-based zoning, adopted by the City Council in 2010, was that it led to unwanted developments such as slot homes.

Indeed, despite his misgivings about the direction of Tennyson, he found things about new buildings that he liked.

Perhaps showing his training as an architect, he praised the fine “masonry coursing,” – bricks running horizontally along the walls – of the Colewood apartments on Tennyson Street near West 38thAvenue.

Espinoza also liked the hidden entrances to apartment units that face Tennyson Street at the Colewood. 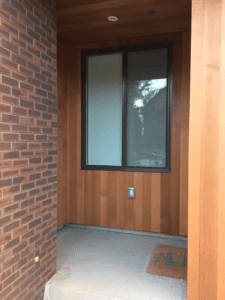 Councilman Rafael Espinoza likes the entrances to apartment units at the Colewood along Tennyson Street.

And Espinoza said the Tennyson Place apartments, with its green exterior accents, “architecturally, is damn nice” although he said the building would be improved if it sported “ground-floor activation.”

And in the middle of the block, he praised a building under construction in that it appears the developer voluntarily respected historic setbacks from the sidewalk.

“I don’t even care what it is going to be,” Espinoza said, given that the developer already is showing signs of a thoughtful deisgn.

According to a sign in front of the building, it will include “luxury condos” that are priced from the $400,000.

Espinoza noted that is not a bad price for the Berkeley neighborhood. The architect’s website said it is a mixed-use building under construction.

Withstanding the test of time

“Look at Tenn Street Coffee,” Espinoza said. “I’m sure the original use wasn’t a coffee shop and bookstore. Buildings like this are extremely adaptable.” 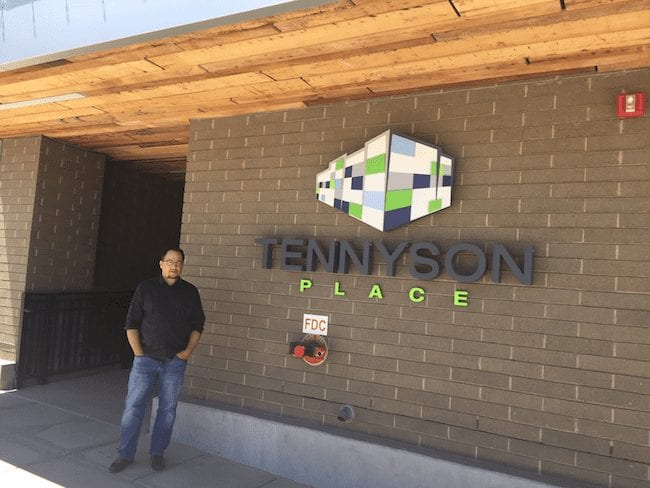 Rafael Espinoza, an architect by training, likes the architecture of Tennyson Place. However, he thinks the building could be improved with commercial space on the ground floor.