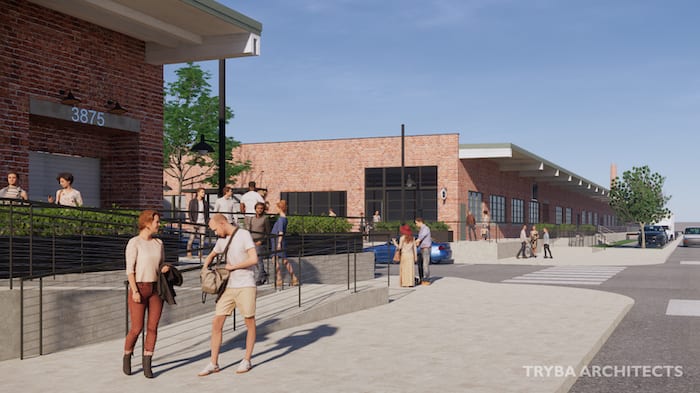 The project team will reconfigure the existing parking layout and work to tie the exterior design of the buildings back together after years of piecemeal tenant changes.

Tryba Architects is the lead designer in the renovation and adaptive reuse of the former Denver Medical Depot, which is located at East 38th Avenue and Steele Street in Denver’s Clayton neighborhood. ScanlanKemperBard recently purchased the 482,700-square-foot industrial warehouse, which sits on a 32-acre site, for $76.6 million. Hyder Construction is the general contractor tapped for the project, which will begin this spring.

Tryba is working with SKB to transform this historic campus into a multitenant “urban-flex” space with new community spaces, modernized amenities and enhanced connectivity within the property and to the city’s new 39th Avenue Greenway project.

The 1942 Denver Medical Depot began operations as a U.S. Army storage and distribution center for medical equipment and supplies necessary for the war effort. Architecturally, the depot is an example of World War II era military installation construction, designed by Denver architect Temple Hoyne Buell. The facility is currently used as a warehouse for light manufacturing, retail, studio office and storage spaces.

In addition to the overarching goal of transforming the facility into flexible space for multiple tenants, the project team will reconfigure the existing parking layout and work to tie the exterior design of the buildings back together after years of piecemeal tenant changes.

“This campus of buildings is a semi-forgotten Denver artifact that was hidden from view for over half a century in the Clayton neighborhood,” said Sarah Komppa, project manager and urban designer at Tryba Architects. “Our team is excited to usher this facility into the next century and help untap the potential for exciting office, light manufacturing, and even restaurants and retail to the neighborhood.”

The Denver Medical Depot was placed on the National Register of Historic Places in 1998 and is one of just a handful of such facilities nationwide. Tryba Architects is committed to the repair, restoration and rebirth of existing structures, beginning in 1987 with the transformation of the Auditorium Arena into the Temple Hoyne Buell Theater to the recent restoration and rejuvenation of Denver Union Station and the Crawford Hotel; a substantial portion of the firm’s work includes the rigorous recovery and renewal of structures and places in need of sensitive and strategic renovation.

“Adaptive reuse has some great benefits, including reducing waste, restoring a portion of Denver’s history, and providing cost savings to the owner and value to the end users.”

The city and county of Denver is underway on the construction of the 39th Avenue Greenway, which runs immediately north of the project. A new two-way drive aisle will connect the interior site to the 39th Avenue Greenway roadway and pedestrian trail. With this new “front door” to the project, the former medical depot will be hidden no more as vehicles, pedestrians and bicyclists will be invited into the site through this new central axis point.