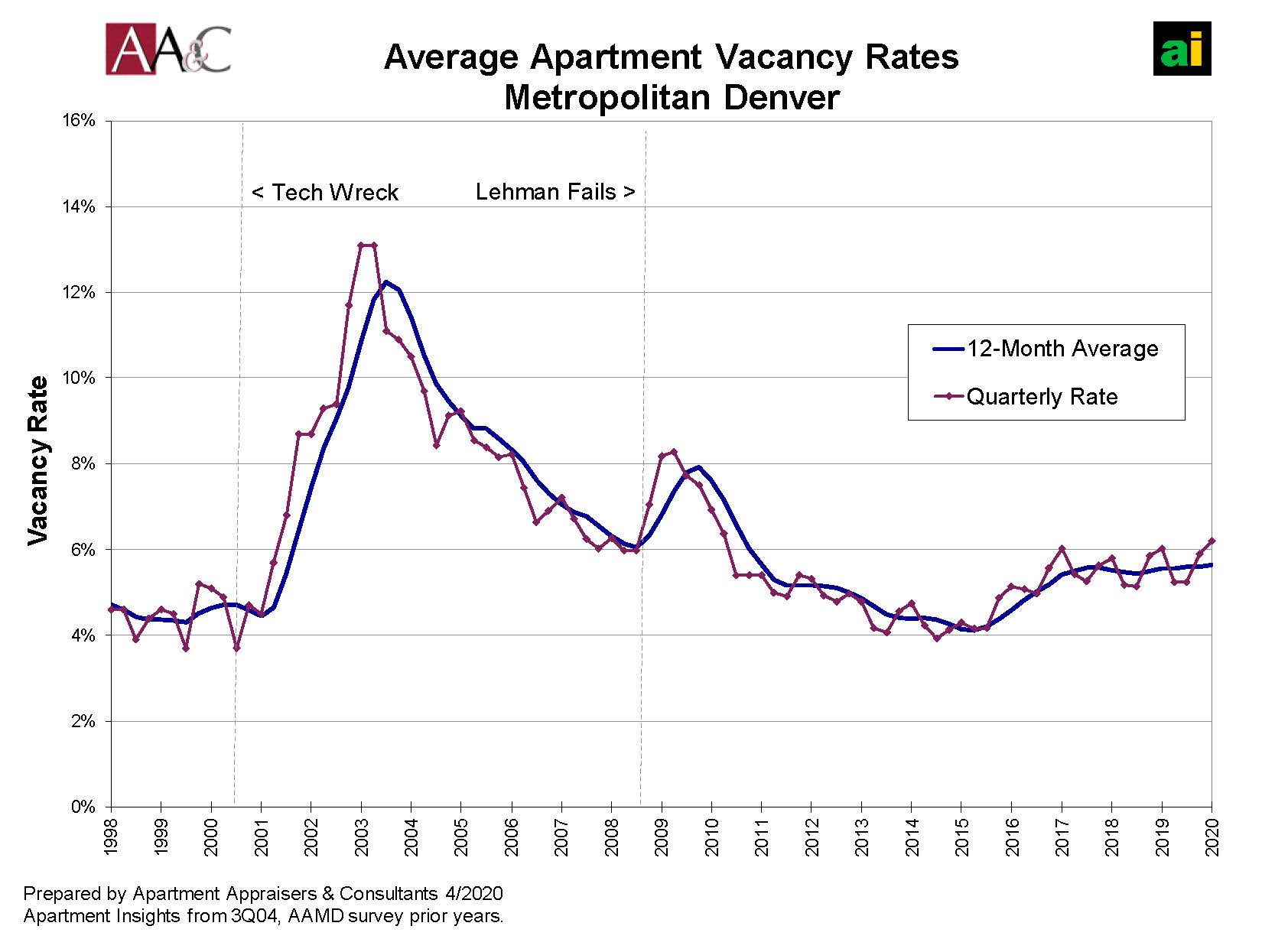 We are living through historic and unprecedented times. Never before have we experienced the level of economic uncertainty that exists today due to the impacts of the novel coronavirus. While our economy is naturally cyclical, and there have been numerous downturns in the past, we have never experienced the massive and immediate spike in unemployment, both nationally and here in Colorado, that we have experienced in the past several weeks. This is because we have never before voluntarily “turned off” large sectors of the economy.

In recent days, our clients and other members of the multifamily industry have reached out to ask what we think will happen in the Denver market in the coming months. And while there is no shortage of analysts providing updates and offering predictions, the simple truth is that no one really knows. Initial reports about rental collections ranged widely depending upon property type, with newer properties experiencing relatively little delinquency and older properties reporting more significant delinquency. 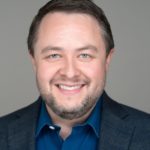 The National Multifamily Housing Council reported that 84% of apartment households made a full or partial rent payment by April 12 nationally, compared to 91% that paid rent by March 12, and 90% that paid rent by April 12 in 2019. These numbers indicate that national delinquency was up 7% in April compared to the prior month. Locally, the Colorado Apartment Association reported that 91% of renters were able to make payments in April, based on a poll that included 75% of the apartment units in the Denver metro area. The numbers indicated that the April rent delinquency rate locally was only 1.8% higher than the January and February rates. The CAA further stated that only 3% of residents had asked for payment plans. Even with increased delinquency, the ratio of Colorado multifamily households that paid rent is much higher than the national average in April. It also is notable that Colorado’s current collection ratio during the pandemic is similar to the national average prior to the impact of the coronavirus.

At this time, there is insufficient evidence to estimate the potential impact this public health crisis might have on supply and demand, vacancy, rents and apartment values due to possible mitigating factors. For instance, many universities have closed their on-campus housing, which could force some students into the rental market, while job losses could force some renters to move back home with parents. Concerns about the economy likely will delay home buying, keeping renters in apartments. The Coronavirus Aid, Relief, and Economic Security Act, a law meant to address the economic fallout from the coronavirus pandemic, may replace lost wages for many unemployed renters in the short term, allowing them to continue to pay rent. Further, increased unemployment benefits should also help limit deterioration in the multifamily market. However, when payments will occur and for how many months is unknown. Depending on the depth of the economic crisis, increased foreclosures could also force homeowners who lose their homes into the rental market. Even so, a softening in the rental market is likely.

Landlords are being discouraged from evicting tenants for up to 90 days, which could keep occupancy high while rental collections fall. If, as a result, properties remain near full occupancy, will they have an incentive to reduce rents or offer concessions? These and other unprecedented factors make it impossible to determine how the apartment market will fare in the months ahead. So, rather than getting out our crystal ball, we decided that it would be more beneficial to provide information about how the Denver market reacted to and recovered from previous macroeconomic downturns.

After looking back, we have at least moderately good news. Because housing is a fundamental need, there always is demand for apartments, even during economic downturns. Multifamily markets historically have performed better and recovered faster than the overall stock market and the single-family market. Although we don’t know exactly how quickly, we are confident that life will go on and the market will recover. 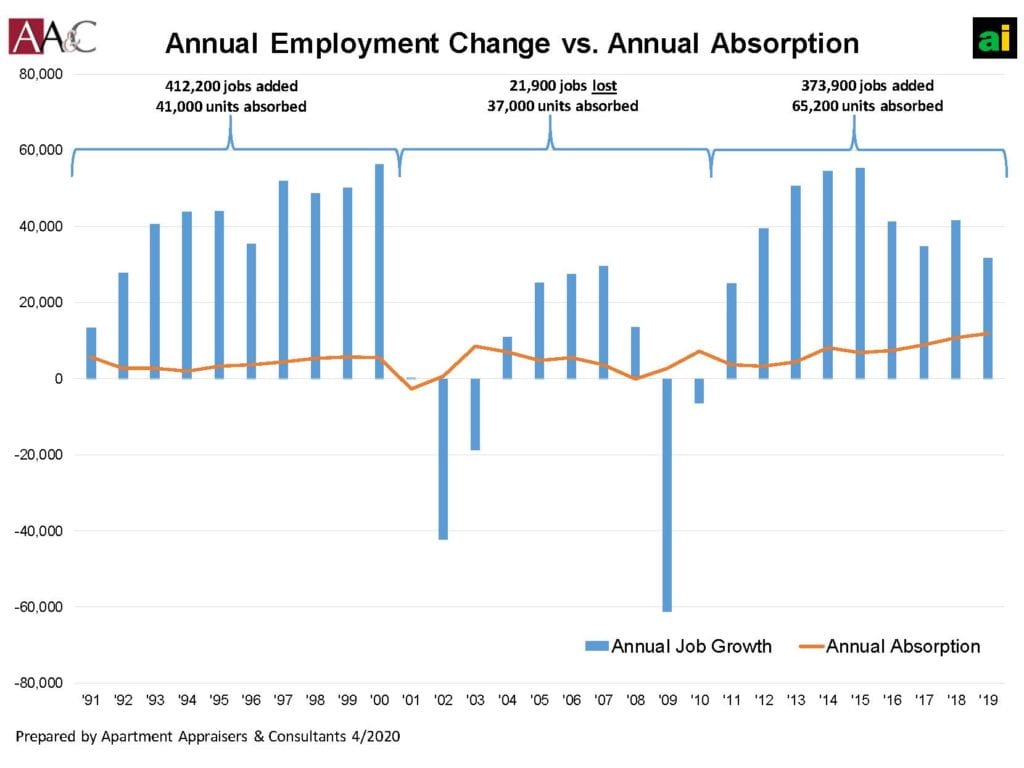 Job growth and absorption. It is well known that job growth is necessary for long-term population growth. However, we have found that job growth is not highly correlated to apartment absorption on a year-by-year basis. From 1991 through 2000, metropolitan Denver gained 412,200 jobs and absorbed nearly 41,000 units. However, the metropolitan area lost a net 21,900 jobs from 2001 through 2010 because the period was bookended by the dot-com bubble and the 2008 financial crisis, yet Denver still absorbed more than 37,000 units over this period. This contradictory pattern occurred as renters moved to the Denver metro area from other parts of the country with even worse economic conditions.

As the local economy recovered from 2011 through 2019, Denver added 373,900 jobs and absorbed nearly 65,200 apartments. Overall, these statistics indicate the widely fluctuating relationship between job growth and apartment absorption, and prove that absorption is achievable even in a period of net job losses. This is not a prediction that absorption will not decrease, or even become negative in the future, but that various forces often benefit the rental market. 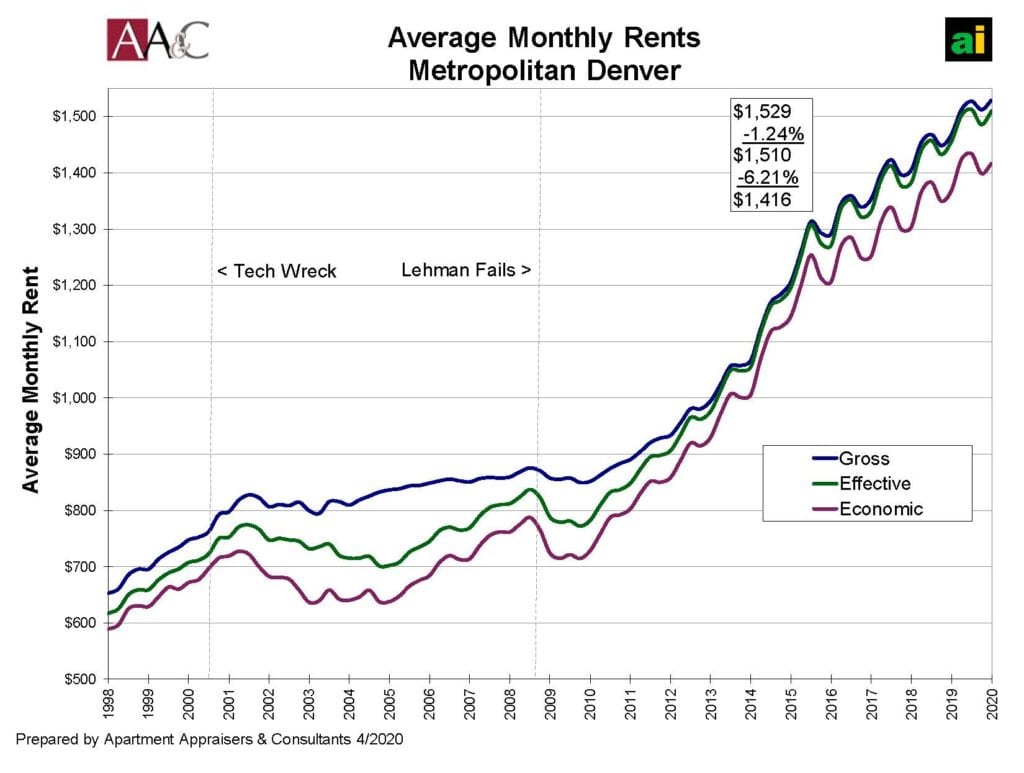 Vacancy and rents. Unsurprisingly, vacancy has increased in the wake of previous major macroeconomic events. When the dot-com bubble burst in 2000, vacancy in the Denver metro area was just under 5%, which increased sharply and reached a maximum of 13.1% three years later in the first and second quarters of 2003. Vacancy then fell steadily, reaching a low of 6% in late 2007 and mid-2008, when the financial crisis began with the failure of Lehman Brothers. The Denver multifamily market fared considerably better during this downturn, with vacancy peaking at 8.3% in the second-quarter 2009. Vacancy then consistently fell until it reached a historic minimum of 3.9% in the third quarter of 2014, before creeping back up and settling between 5% and 6% from 2016 through the first quarter of 2020. The 8% increase in vacancy following the dot-com bubble was much larger than the 2% increase following the financial crisis primarily because there was a very full construction pipeline during the former and a very small pipeline during the latter. We currently have a full pipeline, although it has shrunk significantly over the last two years.

Rents have followed a similar pattern, falling during economic downturns. In the early 2000s, the average monthly effective rent (gross rent less concessions) in the Denver metro area peaked in the third quarter of 2001 before bottoming out in the fourth quarter of 2004, falling 9.4% in that time. Rents then increased until they peaked again in the third quarter of 2008, just as the financial crisis began. Unlike the previous downturn, which took over three years to reach bottom, rents only fell for five quarters during the financial crisis, decreasing 7.7% by fourth-quarter 2009. Rents have been increasing since, through the first quarter of 2020. Initial indications are that effective rents likely will fall in the year ahead as a result of the coronavirus, perhaps by a magnitude similar to the last two downturns. 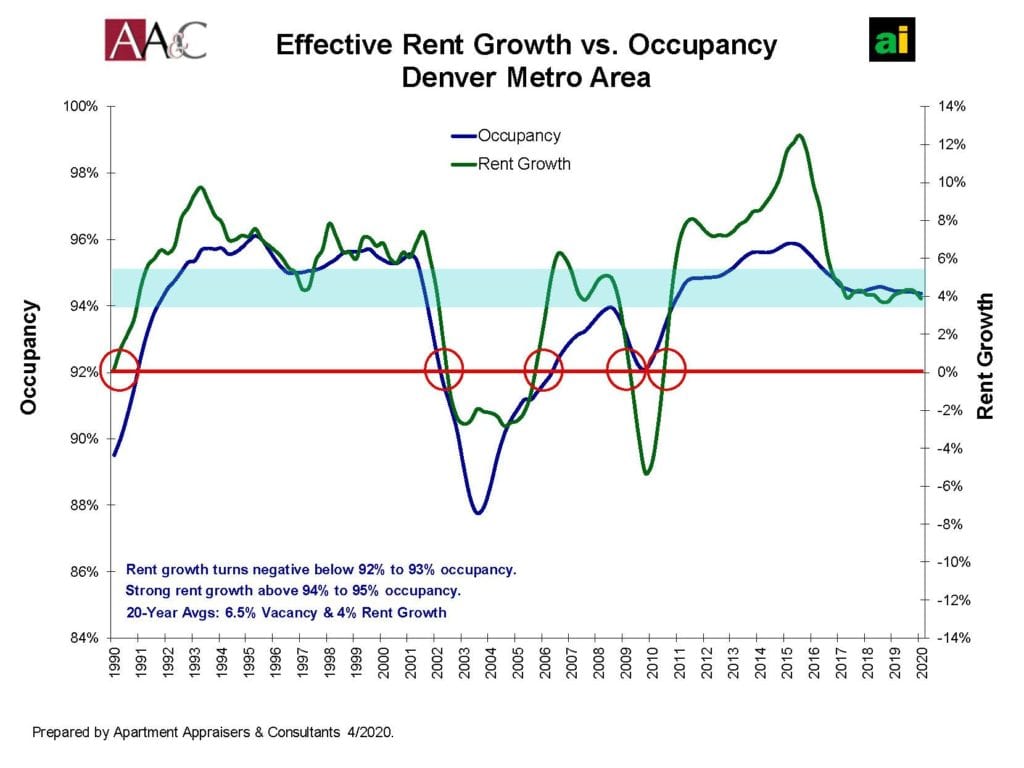 As shown on the following graph, rent growth turned negative when occupancy drops below 92% during the Tech Wreck and at 93% during the 2008 financial crisis. According to Apartment Insights, the first quarter 2020 metrowide vacancy was 6.21%, the highest level in almost 10 years. Vacancy in Colorado is seasonal, and while we generally expect vacancy to decrease in the spring and summer, the current economic situation is likely to offset any seasonal decrease. It should be everyone’s hope that when the government “turns the economy back on,” we see enough recovery over the next few quarters that vacancy does not increase past 7%. 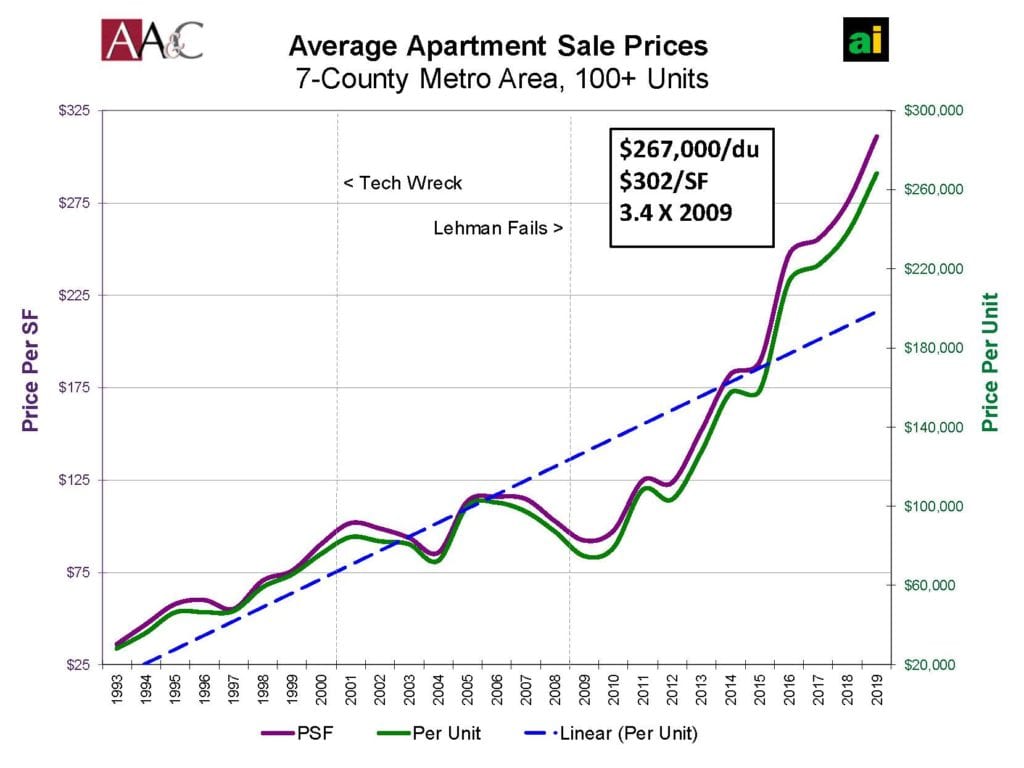 Prices and capitalization rates. Average apartment sale prices reached a peak in 2001, as the dotcom bubble burst, before turning downward and reaching the bottom in 2004, 15.7% lower on a price-per-unit basis and 14.1% lower on a price-per-square-foot basis. Prices then increased again, reaching another peak in 2006, when they turned downward through 2009. From 2007 through 2009, the average price fell 19.5% on a price-per-unit basis and 23% on a price-per-sf basis. Prices have increased precipitously since that time. It is interesting that, although vacancy and rents were less negatively affected after the financial crisis than they were after the dot-com bubble, prices fell more steeply after the financial crisis because of the accompanying large increase in capitalization rates as shown in the chart. 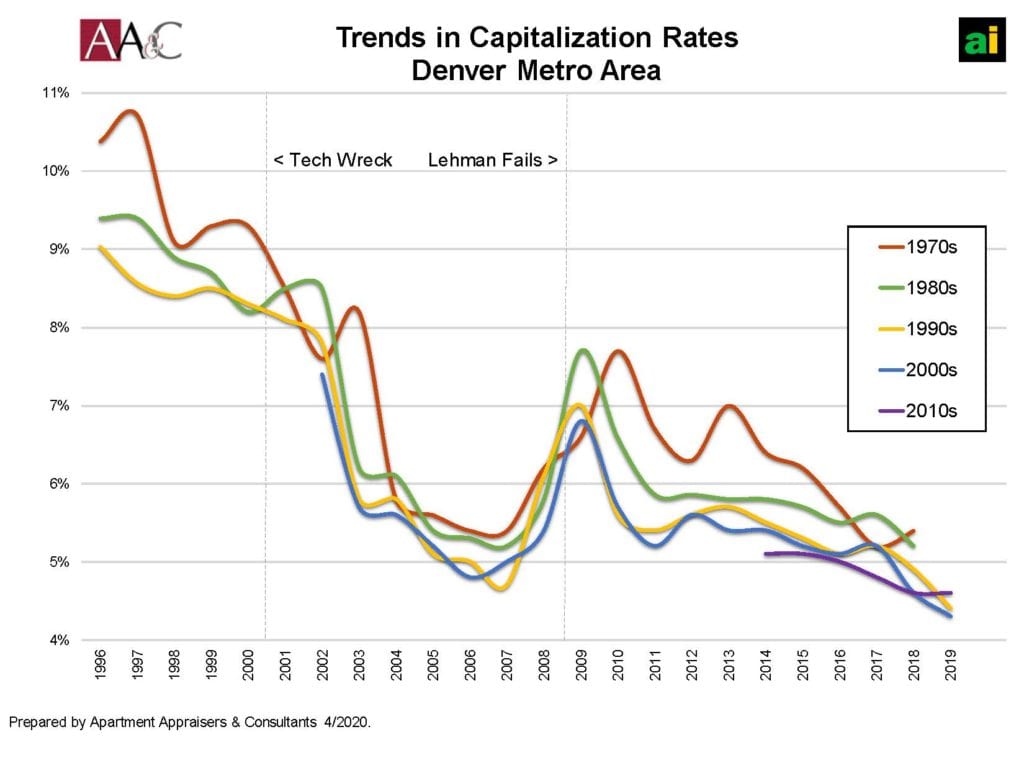 Since it appears likely that vacancy will increase and rents will remain level or decrease, we expect prices to fall. If capitalization rates increase, values will fall further. As with the other metrics discussed previously, there is insufficient evidence at this time to predict the magnitude of expected changes to apartment prices and capitalization rates.