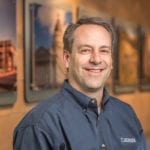 Gary Ellis was promoted to president of Jacobsen Construction Co. He has been with Jacobsen for 19 years, including several as CFO. Ellis most recently served as executive vice president of business development and sales.

Jacobsen’s board of directors unanimously elected Ellis to succeed Douglas Welling as company president. The change is the culmination of Jacobsen’s decade-long leadership development and succession plan. Welling, who began his tenure as president of Jacobsen in 2006 and as chief executive officer in 2012, will continue as CEO.