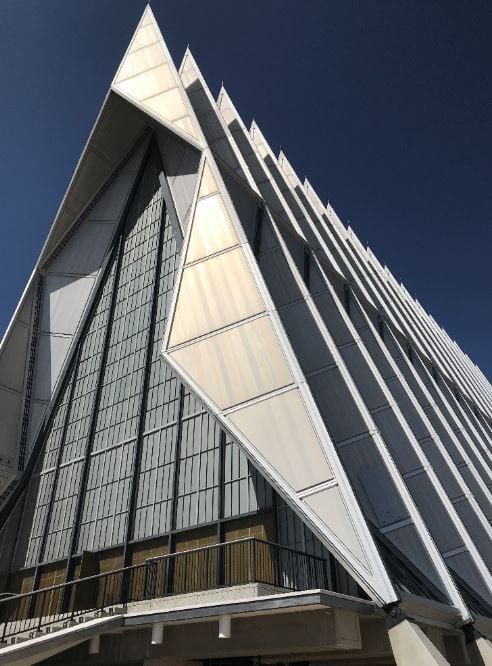 The renovations are limited primarily to the curtain wall system and glass-end walls surrounding the Protestant Chapel.

JE Dunn Construction was selected to renovate the U.S. Air Force Academy Cadet Chapel in Colorado Springs. Considered one of the most recognized icons in the United States and most visited Colorado landmarks, the USAFA Cadet Chapel was built in 1963 and designed by Skidmore, Owings and Merrill of Chicago.

The Cadet Chapel was awarded the American Institute of Architects’ National Twenty-five Year Award in 1996 and was named a U.S. National Historic Landmark in 2004.

The renovation of the chapel is projected to cost $158 million and will take 48 months to complete.

The renovation was designed by AECOM (Denver) and Wiss, Janney, Elstner Associates (Chicago).

The project is being administered through Air Force Civil Engineer Center Design and Construction in San Antonio, Texas.

The chapel is 150 feet tall and is most known for its 17 metal spires, or tetrahedrons, enclosed with aluminum panels and Dalles de Verre Glass. The metal panels will be replaced by Zahner of Kansas City.

The building includes a Protestant chapel, a Catholic chapel, a Jewish synagogue, a Muslim mosque, a Buddhist temple, a Falcon Circle and All Faiths rooms.

According to JE Dunn Project Executive Craig Stearns, the qualifications for the key trade partners were very rigorous – JE Dunn had to demonstrate the company’s historic experience as well as the company’s experience moving and restoring large pipe organs.

Construction will begin in October and be complete by the fall of 2023. JE Dunn will construct an enclosed super structure over the chapel to protect the building from weather as it disassembles the structure for refurbishing. Pieces of the structure will be shipped to Atlanta and Los Angeles for refurbishing while a full-scale exterior mock-up for testing will be constructed in Dallas.

The renovations are limited primarily to the existing curtain wall systems and glass-end walls surrounding the Protestant Chapel – the most prominent feature of the Cadet Chapel – as it has leaked since it was new and has caused damage to interior artifacts, according to Sean Reish, project manager for AECOM.

“As the chapel is a contributing structure to the Cadet Area National Historic Landmark status, it is imperative that the renovations be performed with the sensitivity to adhere to historic standards and to maintain aesthetics that match the period of historic significance,” Reish said. These renovations include removing the existing aluminum façade, which currently acts as the primary membrane system, and replacing with a new insulated panel system that will become the primary membrane system. A new aluminum façade that will match the current aesthetics will be fastened to this new primary membrane system. The stained dalle glass strips will be salvaged, cleaned and restored to their original condition. Retrofitted features over the years to stop the leaking, and a low-iron glass will be used to bring back translucency that was intended in the original design, according to Reish. “The interior plaster panels and lighting will be replaced to match existing aesthetics, but LED adjustable lights will be used to provide modern efficiency and adhere to the original light patterns and colors. The glass end wall systems will be replaced with insulated glass panels that match the existing aesthetics yet provide modern efficiency.” Asked what will be the most challenging part of the project, Reish said, “Matching the metallurgy and look of the original aluminum panels as modern standards and tolerances are much higher today than in the early 1960s when the chapel was being constructed.” With regard to how the iconic status of the USAFA Cadet Chapel will inform the approach, Reish said staying true to Walter Netsch’s original intent for the design is the guiding principle.

“Even though modern code dictates changes that are necessary from a life-safety perspective, we as a team have to make sure that the upgrades are performed in a manner that preserves the historic nature and aesthetics true to Mr. Netsch’s vision,” he said. For example: Modern National Fire Protection Association code dictated that the building be sprinklered for fire protection. “The design team knew this would have an impact on aesthetics and historic nature,” Reish said. As such, “We modeled the chapel using Revit and performed a smoke and egress analysis proving that a sprinkler system was ineffective considering the height of the structure. We were able to eliminate this requirement and compromised by only designing sprinklers in the bathrooms and soffits at the main entrance thus preserving the original aesthetics.” Additionally, several of the aluminum fasteners were no longer required due to the new designed fastening system for the aluminum façade. However, we designed fasteners to still be present to match the original aesthetics even though they are not fastening the façade.

“These are just a couple of examples of where our designs had to take a very prescriptive approach to make sure Mr. Netsch’s vision is carried through in this renovation,” Reish said. “However, our design team had to take this prescriptive design approach with all details of the design to preserve the iconic nature of the chapel.” “It is exciting to bring talent from both project types to bear on this project,” said JE Dunn Construction Senior Vice President Margaret Bowker. “JE Dunn studied this project for five years, brought in talent from five offices and had over 50 JE Dunn professionals working on the competition.”