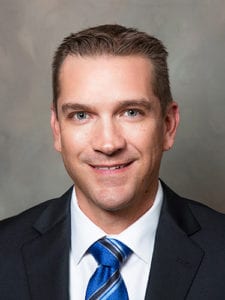 Most recently a managing director with the retail division of Newmark Knight Frank in Denver, Kliewer will specialize in representing retail tenants, landlords and property owners across the metro area.

He has more than 17 years’ experience in the industry, including working on some of Denver’s most notable retail projects and more than 50 transactions along the 16th Street Mall.

He also has helped source retailers to anchor major ground-up developments, such as Hampden Town Center, Highlands Garden Village, The Landmark and Lincoln Commons. Over the course of his career, Kliewer has completed more than 750 retail transactions with a total consideration in excess of $500 million.

In addition to his work in the Denver metro area, Kliewer also serves as a multimarket adviser, specializing in site selection and deal negotiation for regional and national tenants. He began his career with Trammell Crow Co. in Denver, first joining CBRE when it acquired Trammell Crow in 2006.

Kliewer received a Bachelor of General Studies degree from the University of Kansas. He will work alongside Jon Weisiger and Jim Lee in the firm’s Denver Tech Center office.