McGregor Square is being transformed into a mixed-use development featuring a hotel, condos, offices, retail and restaurants. The three buildings encircle a 28,000-sf plaza that will host year-round events like pre- and post-game activities, concerts, a skating rink and more. Courtesy Brad Nicol Architectural Photography

McGregor was also a visionary.

In a 2006 email to fellow Rockies executives, he outlined his plan to transform the West Parking Lot, a city block bordered by 20th, Wazee, Wynkoop and 19th streets, into a mixed-use development featuring a hotel, condos, offices, retail and restaurants.

And it’s the perfect legacy for a treasured member of the Rockies family.

Coors Field, Denver’s home of the Colorado Rockies, is 25 years old and with that age comes the inevitable maintenance and upgrade costs needed to keep pace with newer ballparks around the league. So, where to find the tens of millions of dollars needed?

The Stadium District, which owns the stadium, funded the land acquisition and built the stadium, with the Rockies responsible for ongoing maintenance. However, there were no funds available for future capital needs, especially those needed for decades to come. The city of Denver and the state of Colorado were in no position to pony up the funds. And nobody had the desire to go to the taxpayers.

The idea of developing the West Lot cropped up as a viable option that would solve the Rockies’ problems by generating a projected $125 million over the next 30 years.

At the time, no one remembered the concept sketched out in 2006 by McGregor. Chalk it up to coincidence or great minds think alike. And after a few rounds of requests for proposals, Stantec Architecture was selected as the design firm to move the project forward.

“This became a creative way to do a land lease of this property and fund maintenance of the stadium district over the next 30 years,” says John Yonushewski, senior principal with Stantec.

“So, that’s when the Rockies said rather than give this up to a development group, we’d like to have control over this and treat it as an extension of the Coors Field experience.” 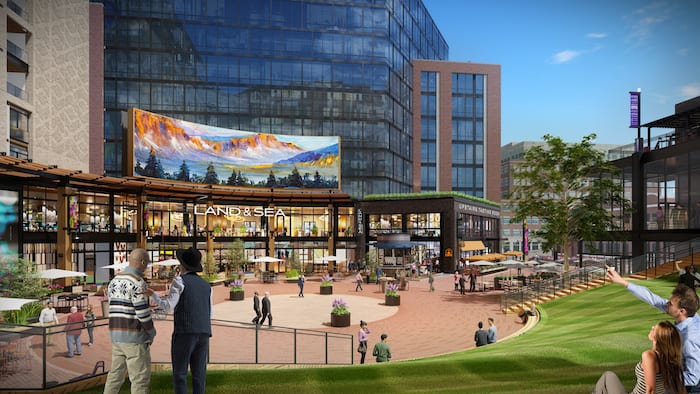 The content plaza that the neighborhood desired will activate the area year-round with a variety of restaurants and a food hall that spill into the space.

According to Yonushewski, in initial meetings with the Rockies, Stantec was urged to conduct neighborhood outreach to properly gauge the needs of the Ballpark and LoDo neighborhoods.

“The overwhelming response that we heard through canvassing the neighborhood groups and residents was the need for an open space to gather for activities,” says Yonushewski. “And that was in line with the goal of the Rockies to energize this area and make it a full-time community.”

Yonushewski explains that Stantec and the Rockies viewed the rarely used Wynkoop Walkway as being ripe for utilization and planned to create “something similar to Manhattan’s Rockefeller Center, where a more passive plaza is paired with an activated plaza.”

That input from the locals was not only welcomed but implemented.

“We spent a year, going back and forth with the neighborhood groups to develop the vision of what makes sense. Where should these buildings be? What form should they take? What size should these plazas be? What kind of connection should the content plaza have with Wynkoop Plaza? But, also, what kind of relationship should we have back to Coors Field? And within those discussions, quite honestly, the diagonal cut through (from 19th Street and Wynkoop to 20th Street and Wazee) was a direct result of those meetings.”

With a vision for the project firmly taking shape, a construction RFP went out in 2017 and Hensel Phelps, fresh from its highly successful 1144 15th St. project, was added to the lineup in early 2018 for design-assist and construction.

For the next year, Hensel Phelps worked with Stantec and the newly formed development group West Lot through preconstruction and to reconcile the programming wish list with budget realities.

“The goal is to get the budget to match the desires of ownership, the design team, or any of the other stakeholders in the project,” says Kurt Seeman, operations manager for Hensel Phelps. “Trying to get those things to balance can be challenging. So, it had to be a collaborative process and there were a lot of conversations, a lot of give and take by everybody to get those components aligned before we actually started construction.”

Groundbreaking was held in October 2018 with a targeted completion date of December 2020.

With such an aggressive timeline, Hensel Phelps knew it had no margin for error. As with any urban infill project, phasing and staging were issues to be dealt with, but with their experience on 1144 15th, HP deftly handled those with special attention paid to their LoDo neighbors. Contaminated ground water was nothing new, but coal ash, left over from the location’s decades of use by Union Pacific railroad, was a new challenge. Of everything, though, the timeline turned out to be the biggest hurdle.

“The speed in which we wanted to build this thing was definitely a challenge,” says Seeman. “It was a challenge from a logistics and resource standpoint and, certainly, COVID-19 didn’t help.”

Topping out was in February and, despite all of the challenges and a global health pandemic, completion of McGregor Square will be only a few weeks behind the original scheduled completion date.

A Win for the Community and the Rockies

When construction on McGregor Square was well underway, someone in the Rockies organization found that now famous email McGregor wrote back in 2006. To everyone’s amazement, McGregor Square is nearly the exact realization of what he had envisioned.

The 13-story boutique hotel is managed by Denver-based Sage Hospitality, which also operates The Crawford, The Oxford and Maven. It offers 176 rooms on levels four through 12, 20,000 sf of ballroom space on the third level coupled with 10,000 sf of outdoor terrace space that overlooks the plaza. Restaurants, bar, coffee shop and lobby anchor the first level and coming soon to the second level will be a Rockies Hall of Fame. 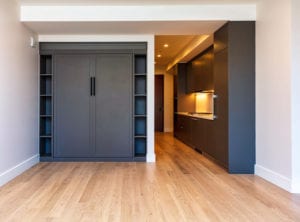 Priced at $1,100 per square foot, the units are already mostly sold out. Courtesy Michelle Meunier Photography

The 13-story residential tower offers 103 luxury units – 500-sf studios to one- and two-bedroom units – loaded with every high-end amenity you can imagine. One buyer already has purchased three units to form a 6,000-sf penthouse. At $1,100 per sf, the units are already mostly sold out. And one of the proudest residents will be McGregor Square developer Dick Monfort.

The hotel and condo buildings are connected via a skybridge on the upper floors. The 13th floor skybridge is an expansive open-air gathering place, shared by hotel guests and condo residents, complete with a pool, fire pits, grilling area and knockout views of the city and foothills. The shared 12th-floor skybridge features a sizable fitness area that will also be shared by condo residents and hotel guests.

The Tattered Cover bookstore is relocating from its current home on the 16th Street Mall and inhabits a portion of the two lower floors of the residential building.

The 11-story, 225,500-sf office tower stands along 19th Street and represents the transition point from LoDo to McGregor Square and Coors Field. Its red brick masonry, glass and steel elements are clear nods to the historical and industrial roots of the area, as well as the architectural elements of Coors Field, but the sense of scale relates back to the buildings that line Wynkoop. The red brick masonry rises up from the ground level, but offsets to glass at the ninth level, which creates an attractive setback.

While the residential tower utilizes tan brick, the hotel’s exterior matches the Coors Field red. Both have varying textures of masonry, glass and steel that, again, pay homage to their home in LoDo.

But, the real star of the lineup is the 28,000-sf content plaza that the neighborhood desired and will activate the area year-round. A variety of restaurants and a food hall spill into the space and a curved grass berm rings the space on the opposite side. Above the restaurants and facing the berm is an 80-by-20-foot curved multimedia screen that will entertain visitors with game day live streams, concerts and more.

“This is a beautiful project and it’s a place you can take your kids, your grandkids, family, friends, and just have a good time,” says Patrick Walsh, general manager of McGregor Square, who originally joined the team as an investor but got named to the starting lineup. “The restaurants are going to be great. The Tattered Cover is obviously a very special place. McGregor Square complements LoDo and it’s going to be a good spot to have a lot of fun.”

When I asked Yonushewski what he wants visitors to feel when they see McGregor Square for the first time, there was no hesitation, no moment to reflect or prepare a standard quote prepared by PR handlers. Without skipping a beat, he said: “I want you to feel a pride of place.

And when he looks down and sees families sharing a bite, friends enjoying a beverage and a father teaching his daughter to skate for the first time, Keli McGregor’s big smile is going to light up the sky. Bravo, Rockies.

Published in the December 2020 issue of Building Dialogue.