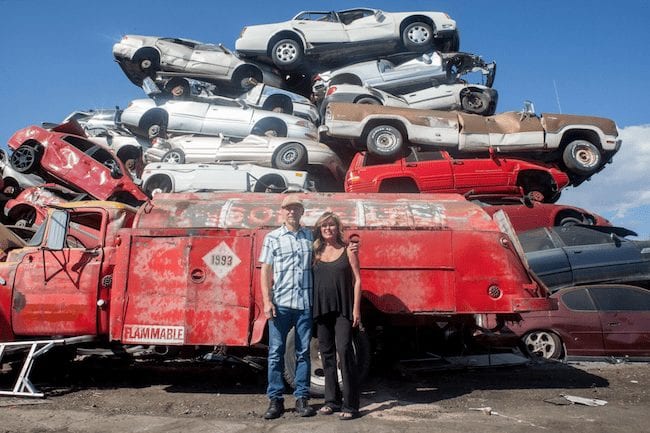 George Medley, and his wife, Irene, shown at their Denver Scrap Metal and Recycling operation.

George Medley spent his last stint in jail in the Adams County Detention Center in 2004.

Today (April 13), Ben Gelt is scheduled to submit plans to Commerce City’s planning commission for Medley’s new home for his Denver Scrap Metal and Recycling – an operation with $12 million in revenues.

The jail is less than a 30-minute drive from Medley’s new 16.9-acre site adjacent to Sand Creek, East 60th Avenue and Interstate 270.

There, Medley not only will operate the scrap metal yards that provides high-paying jobs for a number of people who, like Medley, fought the law and lost, but also will include transitional housing for those who have few places to turn to put a roof over their heads.

I asked Medley if he ever dreamed he would someday be running a successful business a short drive from his jail cell, where he was serving six months for stealing a car. 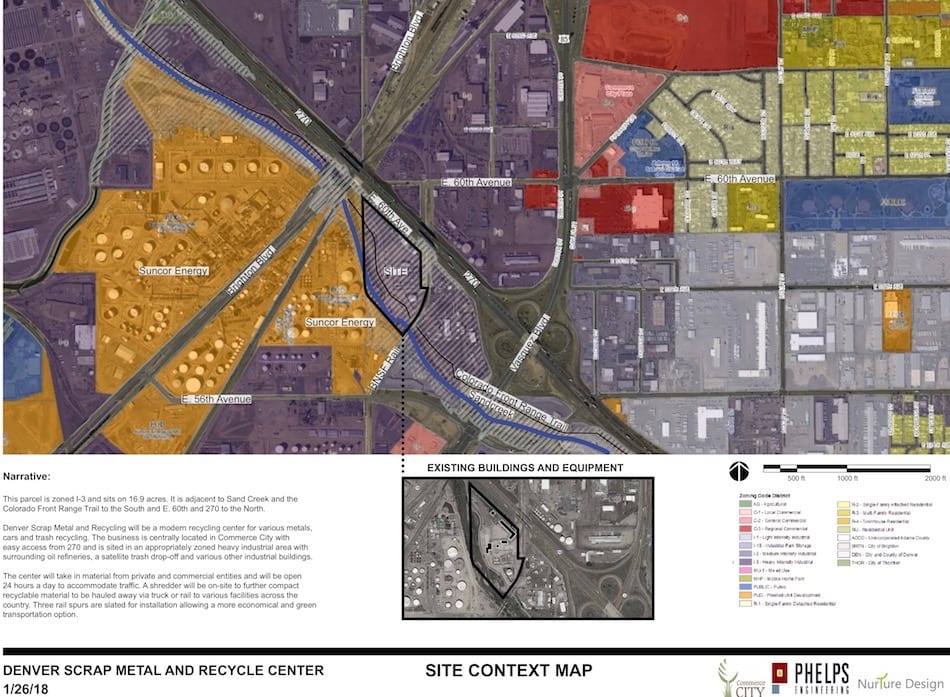 “I didn’t see this coming. No way,” the 52-year-old Medley answered.

All told, Medley spent five or six years in jails for stealing cars and other charges. He stole to support his marijuana habit and cocaine addiction.

The story he has told numerous times is that while he was in the Adams County jail the sheriff asked if anyone wanted to attend church or Bible study.

Medley went, not to find God, but to get out of his cell.

He flipped open a Bible to Matthew 6:33: “Seek ye first the kingdom of God.” 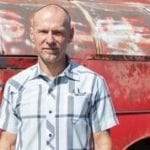 As those words sunk in, he felt overwhelmed by a peace he had never experienced before. He also contemplated all of the pain he had caused so many people.

“Part of my message is, if you shoot somebody, it is a tragedy and people will mourn the person you killed. With drugs, you can’t even do the math on all of the people you have hurt. I once had a lady who was running drugs for me and she was arrested after smuggling drugs from Mexico for me. She got 10 years in prison. Can you imagine how many people, her family and others, were hurt by the 10 years she spent in prison? That was my fault.”

All told, Medley spent five or six years in various jails, “but not in a row.”

In 2001, he was facing a life sentence for dealing cocaine, after having been on the run for almost 10 years.

When he was caught, he was offered a 32-year plea bargain.

His lawyer told him to take it.

Then, the prosecutor’s case unraveled.

Audio tapes connecting him to crimes were damaged and a woman who was going to be a witness against him refused to testify.

“It was kind of a miracle,” Medley recalled. “Honestly, it so strange, it sounds like it was made up.”

Ironically, he said he hadn’t stolen the car that led to his last time behind bars.

“But I had stolen plenty of other cars that I was never caught for, so I deserved to be in jail,” he added.

After he left the lockup, he convinced his wife, Irene, to accept Jesus as her savior, too.

Medley figured no one would hire him, given his criminal record. 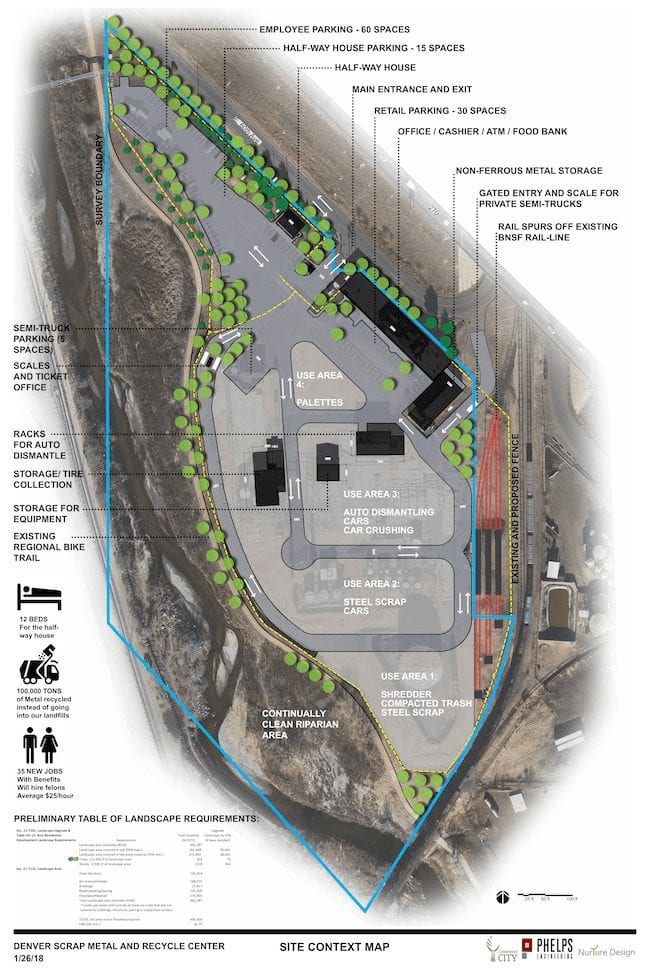 He put an ad in Craigslist to buy junked cars.

They towed the junkers with his wife’s 1980 Ford Probe, a small four-cylinder car. They eventually burned out its clutch.

“If the car could be fixed, I’d fix it and resell it on Craigslist,” he said. “Most of them were beyond repair and I would sell them for scrap metal.”

His scrap metal grew by leaps and bounds.

“I bought it from a real estate guy, and real estate guys don’t leave money on the table. He told me he had a $3 million offer from a marijuana company that wanted to grow pot in his warehouse. He was an old-school businessman, but he gave up $700,000 because he told me he liked what I was doing.”

A large percentage of the people he hires have criminal records.

“We have one guy who served 27 years in prison for murder. He’s a real sweetheart, but if you looked at him, you would understand why most people would not even consider giving him a job. We have guys wearing ankle bracelets.’”

Medley pays a minimum of $15 per hour, and some of his more skilled workers make $40 an hour.

“Most of the times, if a felon can find a job, it’s just pushing a broom,” he said.

“It’s a great time for real estate,” said Medley, who also has a business that fixes and flips homes. “The land is probably worth $10 million to Alberta today. That Washington Street site is a gold mine.”

He couldn’t remember exactly how much he paid for the Commerce City property, but said it was $4.2 million or $4.3 million.

George Medley wants to offer transitional housing in this building on his Commerce City site.

The parcel includes an existing building that Medley plans to turn into transitional housing. He plans to lease it for $1 a year to a non-profit organization.

All of them are candidates for his transitional housing building.

He also plans to provide a training program at the new site for at-risk youths, to teach them in-demand skills, such as welding.

“I could imagine a number of the people living in the transitional housing also becoming future employees in the scrap yard,” Medley said.

“George’s generosity and philanthropy are just amazing,” said Gelt, who is helping Medley get all of his permits and entitlements he needs frrom Commerce City.

Medley will be moving his wife’s food bank and clothing donation center to the Commerce City parcel.

Gelt is the son of former Denver City Councilwoman Susan Barnes-Gelt and the late Howard Gelt, a longtime Democratic heavyweight.

“George is on a different side of the political spectrum than me,” Gelt said. “We have had a lot of conversations about a lot of things, and we just respectfully agree to disagree.”

“George is just a great guy. He is just this kind of real salt-of-the-earth guy. He is direct, he is passionate.”

Gelt said he knows of no other business that has ever carved out a large part of a site for transitional housing.

“He’s taking something like a third of his site that he could use to grow his business and make more money,” Gelt said,.

“He really doesn’t care about money. He just sees money as a tool to help people.”