“I used to do a lot of them,” said Moody, who recently received the prestigious President’s Award from the Colorado chapter of NAIOP, for his many years of leadership at the commercial real estate organization.

“Running keeps you alive. It gives you a healthy heart.”

Moody paused for a moment. 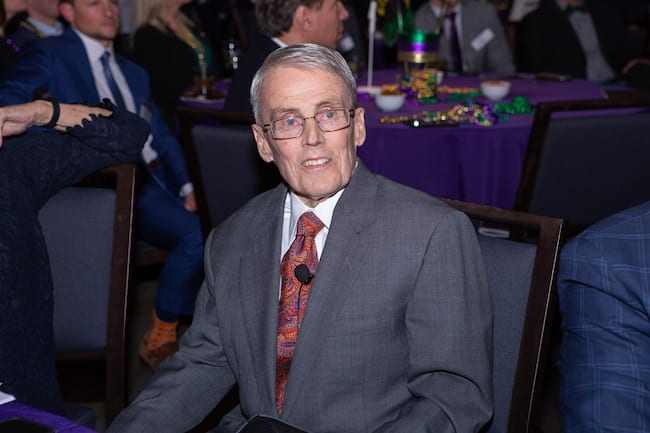 “It didn’t work for me,” Moody deadpanned.

The 75-year-old Moody spent nine weeks before and between last Thanksgiving at Swedish Medical Center.

“I was dealing with end stage heart failure and my kidneys were failing,” he told more than 500 commercial real estate leaders attending the recent NAOIP meeting where Moody was lauded for decades of service.

His health worsened so quickly that he was given a few days to a month to live.

“Through a lot of good care, prayers and wonderful support from friends, many of whom are here tonight, I’m still kicking and this new drug I take intravenously 24 hours a day has seemed to work,” Moody told those attending the NAIOP event.

Moody joined NAIOP in Colorado in 1983, soon after moving to the States from Canada, where he was born, raised and educated.

“Bob became both the voice and the face of the Colorado (NAIOP) Chapter in pursuing sound public policy at the local, state and even national level,” Murphy continued.

Moody was the first two-time president of the NAIOP Colorado, serving that role in 1989 and 1997.

Some of his fondest memories at NAIOP involved with rubbing shoulders with politicians, especially Cory Gardner. Gardner, now a U.S. Senator for Colorado, at the time was the Republican Representative for District 63.

“Back in the day, you could get together after the session and have a civil conversation,” with politicians on both sides of the aisle, he said.

At that time, there was not the division and rancor that runs through politics today, in his opinion. 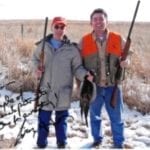 “Congratulations on winning the NAIOP President’s Award,” said Gardner in a statement he released. “Your commitment to serving the commercial real estate industry, and the broader business community, in Colorado deserves this recognition.

You have played a key role in making Colorado a great place for businesses to thrive,” Gardner continued.

“And you make a pretty good pheasant hunter too!” Gardner added.

Democrat Congressman Ed Perlmutter was as generous with his praise of Moody.

“I’ve known and worked with Bob for years,” Perlmutter noted. “I can think of no one more deserving than him to receive this prestigious award.

“Congratulations on a job well done and I look forward to continuing to work together in the future,” Perlmutter said.

Moody was born in Madison Hat, Alberta, but was raised in Vancouver.

He left Great-West Life Assurance, headquartered in Winnipeg, Manitoba, to come to Denver.

Denver, he noted, had a better climate and better job opportunities than in Canada.

He remembers telling his wife Cheryl, while sitting on their summer house on Lake Winnipeg, that in Denver you could actually sit outside without being eaten alive by mosquitoes.

Moody also was tiring of “creeping socialism” in Canada. Unfortunately, in his opinion, that is coming to Colorado and the Denver area, especially with moves to shut the fracking industry.

I asked Moody to look into his crystal ball as far as the future of commercial real estate in the Denver area.

“I’m not very optimistic,” Moody replied. “I was here in the ‘80s when we had the last oil and gas bust. The Democrats right now are trying to create another bust by doing their best to stop fracking. That would be a disaster.”

He noted he has toured fracking sites and came away impressed by how safe they are.

“Sure, there are risks. But there are risks every time you get in a car and there are risks walking to the grocery store,” Moody pointed out.
He believes legislators would better serve constituents by addressing issues such as water, instead of focusing so much effort on trying to end fracking in Colorado.

As far as his heart, Moody said his latest round of health problems weren’t totally unexpected.

“I had heart valve surgery 28 years ago and things started to deteriorate from there,” he noted.

But Moody will always treasure his time at NAIOP and all of the friends he made in commercial real estate.