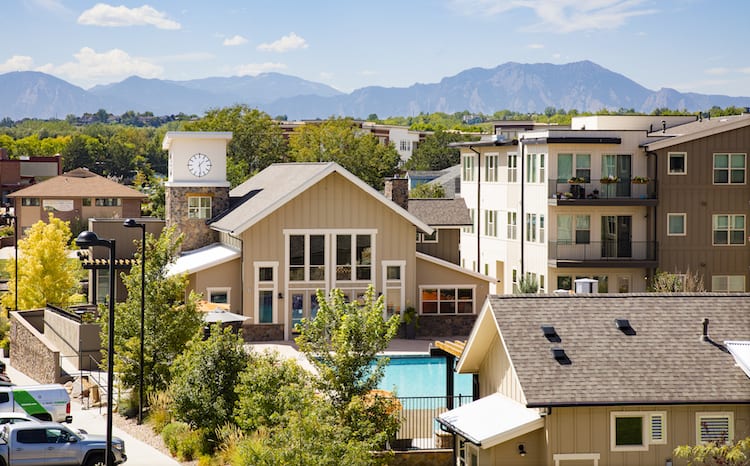 Confluence Cos. developed North Main at Steel Ranch in Louisville.

Confluence Cos. sold its North Main at Steel Ranch apartments in Louisville for $67 million, or $293,860 per unit.

The 228-unit community at 1724 Steel St. sits on 7.66 acres and features more of a “neighborhood feel” than some of the other new apartment developments in Louisville, according to CBRE Senior Vice President Matt Barnett.

“It was really attractive from that standpoint, and they were getting strong rents” – about $2 per square foot at the time of the sale, said Barnett, adding the property received “very strong” interest from investors.

“I think the general consensus was you could not replace the property for the price that was paid for it,” he said.

Confluence Cos. developed North Main at Steel Ranch in 2013. The apartment community consists of one-, two- and three-bedroom units across seven three-story buildings. Community amenities include a 24-hour health and fitness club, yoga studio, heated year-round pool, covered bike storage, a media room, community dog wash, and an on-site pub with beer on tap. There is a combination of covered and surface parking.

The apartments are just northwest of the intersection of South Boulder Road and North 96thStreet, along the future Regional Transportation District B-Line commuter rail. They are within a few miles of several large employers, including Boulder Community Hospital, CenturyLink, Oracle and Ball Corp. The property is accessible to more than 7.2 million sf of nearby retail space in downtown Louisville, and at Flatiron Crossing, Orchard Town Center and Superior Marketplace. It also has access to miles of trails and open space.

“North Main is a thoughtfully built community that offers favorable rents, a convenient location for both entertainment and employment, and a Class A alternative to denser surrounding areas,” said Barnett.

“High home prices and rents compel many residents who work in northwest Denver to look outside the city of Boulder for housing. Louisville, with its easy accessibility to Boulder, Broomfield, Interlocken and downtown Denver, provides a good alternative with its own cultural vibe that is both vibrant and welcoming,” Barnett said.

Louisville and surrounding areas of Boulder County have seen “fairly consistent supply (of apartments) coming on line over the past five years, but all of it gets absorbed, and rents have grown during that time period,” he said. “It’s a really well-performing submarket with some strong employment drivers.”