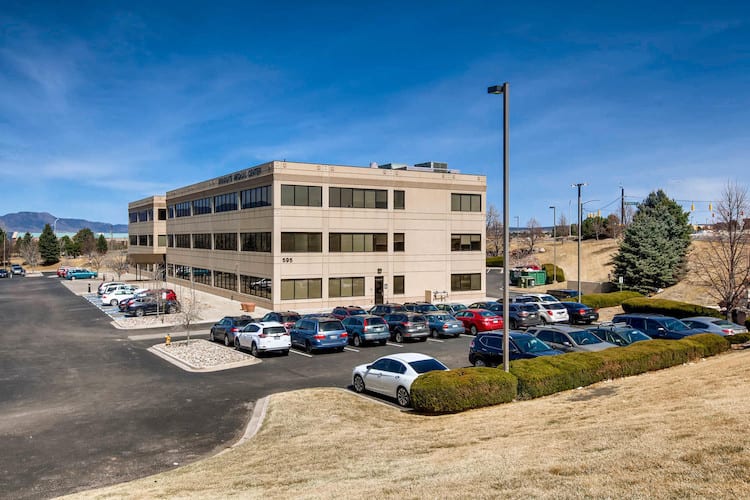 Briargate Medical Center in Colorado Springs is the largest of the three medical office buildings that sold.

A local partnership that buys and repositions troubled medical office buildings reaped the rewards of its efforts with the $31.2 million sale of three of its 12 buildings in metro Denver and Colorado Springs.

The overall price for the portfolio was $235.97 per sf. The off-campus buildings were 95% leased, 20% by major health care providers, including HCA HealthOne, UCHealth and DaVita.

“While we’re sorry to part ways with these assets, all three exceeded our original projections, and now is the time to move on to the next opportunity,” said Littmann.

Greenwood Medical Center, built in 1979 and renovated between 2015 and 2017, is located in the Denver Tech Center. It’s close to Swedish Medial Center, HealthOne Centennial and Littleton-Porter Adventist Hospital. The building is 100% leased to 18 tenants.

Briargate Medial Center, located in northern Colorado Springs, was built in 1999 and renovated in 2016. It is 93% leased to UCHealth Medical Group Primary Care Clinic and other tenants.

“Denver is a target market for institutional health care investors. As such, we received significant interest in the portfolio and achieved very strong pricing on behalf of the seller,” said Chris Bodnar, vice chairman of CBRE Healthcare Capital Markets. Bodnar handled the transaction with the CBRE Healthcare team of Lee Asher, Ryan Lindsley, Jordan Selbiger and Sabrina Solomiany.