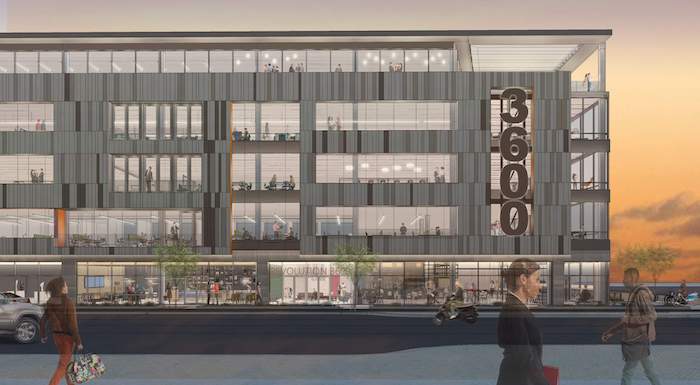 This five-story office and retail is located three blocks from the train station at 38th and Blake streets.

Haselden Construction, the general contractor for the project, has obtained all city approvals and is slated to break ground in the second quarter of 2019. The five-story office and retail development is located three blocks from the train station at 38th and Blake streets, which connects Denver Union Station to Denver International Airport. Anderson Mason Dale is the architect.

“Our design vision grew from a deep investigation of the River North community and historic design vocabulary,” said Ben Blanchard, AIA, Anderson Mason Dale principal. “We were inspired by the vibrant and kinetic tapestry of materials and textures, the bespoke maker-culture of the neighborhood, the use of reclaimed and repurposed materials, and finally the landscape of iconic billboards and signs that identify the neighborhood.

“We designed the Brighton Boulevard facade as a translation of this billboard landscape, dramatically cantilevering it outward toward the right of way, and marking the 36th Street corner with an oversized building sign to establish building identity,” Blanchard continued.

The building is 50 percent preleased, which paved the way for construction.

“The project wouldn’t have proceeded in this market cycle if it weren’t for the preleasing of 50 percent of the office space by WeWork, along with the continued strong demand by tenants to be in the RiNo area,” stated Ed Haselden. The WeWork lease positions it as the city’s largest single private tenant.

WeWork, a shared office community, has signed the financing on 68,000 square feet of space, securing its position as the anchor tenant. The company will occupy the second and third floors. Additional office space is available for lease on the fourth and fifth floors – the building’s top floors, featuring flexible 33,000-sf column-free floor plates for a combined 66,000 sf of available office space. Rev360 is anticipated to deliver in the third quarter of 2020.

Being located at the corner of Brighton Boulevard and 36th Avenue provided the opportunity to capture sweeping southern and western views of the downtown skyline and Front Range, according to Blanchard. To capitalize on this opportunity, a series of angular cantilevered balconies were integrated within the southwestern façade, offering building tenants a place to gather and socialize on each level with access to “dramatic” views.

To honor the history and legacy of Industrial Motors and Machining as a neighborhood institution, the building features reclaimed elements from the original IM&M structure within the building lobby along Brighton Boulevard, including original signage, gantry beams and industrial fixtures.