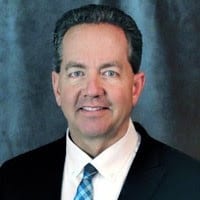 Smith has 30-plus years in multistate design and construction for heavy civil, utilities, site work, landscape, and reclamation. He has led teams of 10 to 1,800, plus overseen public hearings, public approval processes, private philanthropic ventures and engineering reviews with countless government and nongovernment groups at all levels.

Smith, who previously worked as an R&R employee in the late 1990s, continued to cultivate strong relationships with the firm after his departure, ultimately bringing the company on as a survey and engineering subconsultant on his projects.

He holds a Bachelor of Science in civil engineering from the University of Wisconsin, Platteville; an honorary master’s degree in sports field construction from The University of Denver; and a doctorate in risk management from the San Francisco Institute of Architecture.

His professional experience in public and private sectors spans the spectrum: He’s worked on projects ranging from $100,000 to $400 million, including more than 200 running tracks and an additional 200 synthetic and natural fields, plus environmental projects, bridges and safety surfaces.