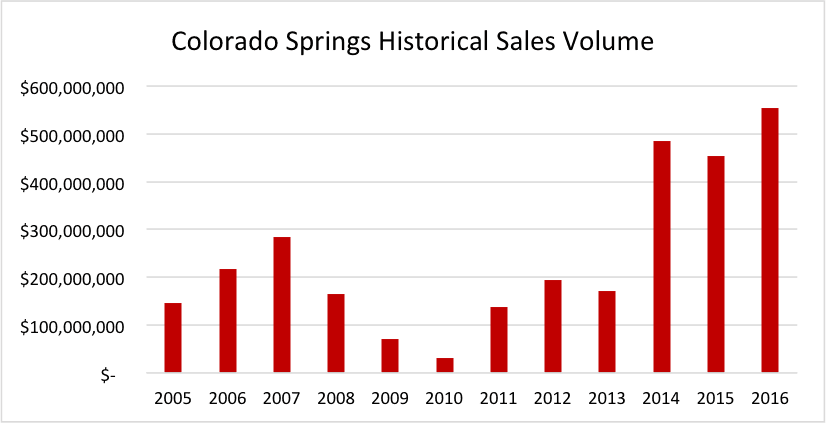 The continued success of the multifamily market in El Paso County is due, in part, to the unmatched positive market fundamentals. With 4.3 percent vacancy, 8.4 percent effective rent growth, low unemployment, strong job growth and a minimal apartment construction pipeline, Colorado Springs is looking better than ever for residents and investors alike. Rent growth in Colorado Springs is among the top five in the nation and is predicted to continue strong in 2017.

While some residents choose to commute to Denver for work, many others will look for quality employment in Colorado Springs. Several industry segments are experiencing growth in the area, particularly health and social services, accommodations and food, education and professional/technical services. Several new businesses have moved into or expanded their operations in the city, contributing to the healthy expansion of the Colorado Springs’ economy. Examples include Sierra Nevada Corp., Raytheon, Progressive Insurance and root9B.

“We look forward to another great year in 2017, with expected growth in the medical and cyber sectors as highlights,” said Bob Cope, City of Colorado Springs Economic Development director, in a recent report.

With over $1 billion proposed and under construction in the health care and medical industry in El Paso County, health care has become one of the fastest-growing industries in the region, currently employing approximately 11,000 people.

The area is home to two major hospital systems: Centura Health’s Penrose-St. Francis Health Services (consistently rated as the fourth-best hospital in Colorado and one of the country’s top 50) and the University of Colorado Health System (ranked as the sixth-best hospital in the state). In November, Children’s Hospital/Memorial Hospital North broke ground on a more than $150 million expansion, expected to be completed in 2018. Similarly, Penrose-St. Francis and UCHealth Memorial Hospital embarked on facility expansions throughout the region.

Currently ranked the fifth-best place to live in the nation by the U.S News & World Report, Colorado Springs has the infrastructure in place to become a regional force in the near future. One of the most provocative and innovative opportunities in the city is within the rapidly growing field of cybersecurity. As per The Gazette, Colorado Springs is home to more than 00 cybersecurity companies, nonprofit organizations, military contractors and units specializing in cybersecurity, including the National Cybersecurity Center, which began operating in November.

Further, Tatiana Bailey, director of the University of Colorado at Colorado Springs Economic Forum, points out the industry had more than 450 unfilled cybersecurity openings in November, with annual salaries between $60,000 and $85,000. The cybersecurity industry is expected to have up to 1.5 million vacant jobs, nationally, within two years – perfect opportunities for veterans and other technology professionals who desire to move into the fast-growing field.

Given all of these recent developments, Colorado Springs should benefit from only accelerated growth in 2017 and beyond. An ever-diverse economy is in expansion mode, with increasing populations, household incomes and home values, coupled with an expanding job market with significant developments in health care and medical services, high-tech industries and the service sector. An influx of residents will create greater demand in multihousing and provide an attractive alternative for both investors and renters to Colorado’s capital city.