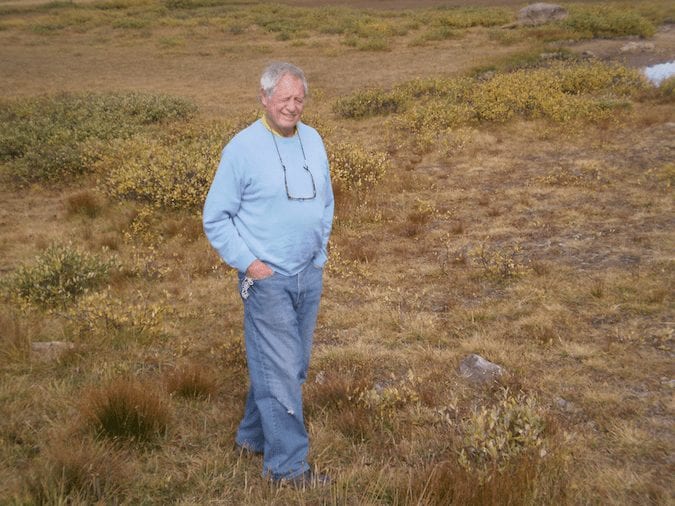 Mickey Zeppelin shown in a possible development sit at Taxi.

Taxi, the mixed-use brainchild of urban pioneer Mickey Zeppelin, not only sparked the Renaissance of RiNo, one of Denver’s trendiest neighborhoods, but it predated it.

While the River North Art District traces its roots to 2005, the former Yellow Cab campus at 3507 Ringsby Court first caught the attention of Zeppelin, a pioneer developer in what is now LoDo and the Golden Triangle, about 25 years ago.

“I was doing some work for the city, actually, some project, I don’t remember exactly what, and I came down to look at what was happening. That probably was 1993 or 1994,”  the 81-year-old developer recently recalled. 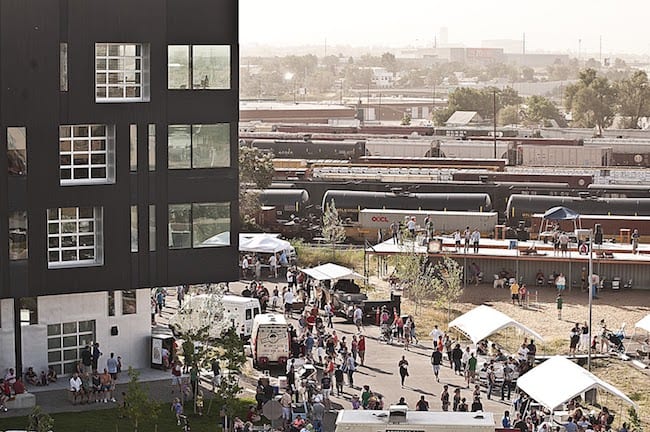 Crowds gathered for an art festival at Taxi.

In fact, he had been “slightly” familiar with the area for decades before he was even a developer.

Zeppelin, a Denver native, while growing up would at times accompany his father, Sam, while the elder Zeppelin conducted business in the area.

“My dad was in the business of selling vegetable containers, and sacks and bags to people in the Denargo Market and that area,” Zeppelin said. 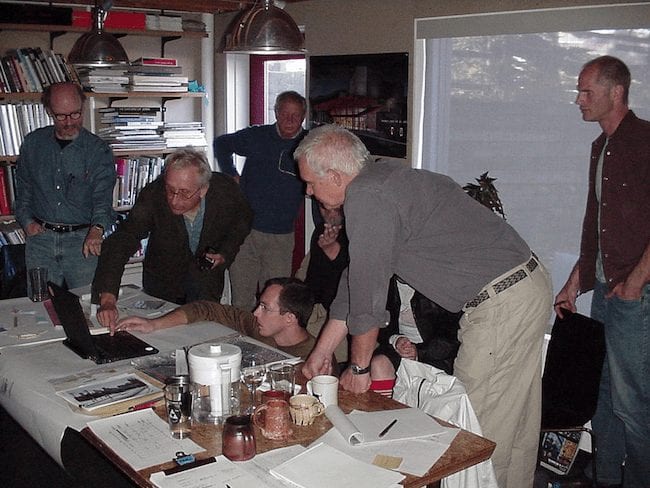 Mickey Zeppelin watches as architects review plans for Taxi 2, circa 2005.

“I’d would love to go with him in his truck to the Denargo Market, the Hungarian Flour Mill and other places. There were all kinds of food-related, industrial kinds of businesses in the area.”

When Zeppelin first looked at the Taxi site, he was impressed, but it was easy to see why others lacking his vision would consider it little more than an eyesore. Indeed, it would be a gross understatement to say he is less than enchanted by much of the development that has sprung up in RiNo in the wake of Taxi.

“It was kind of the end of that whole Yellow Taxi er,” when the site first caught his eye, Zeppelin said.

“There were probably 200 broken-down taxis on the site.”

But Zeppelin saw the potential from the get-go.

“I loved the fact it was on the (Platte) river,” Zeppelin said. “I loved its proximity to downtown. Frankly, I love the grit, the grittiness of the site.”

The Environmental Protection Agency had basically taken over the site because of the cost of cleaning up the environmental damage to the site, he said.

“I talked to a trustee in bankruptcy court about buying it and he said basically he couldn’t do anything with the land until the remediation was over with.”

He waited several years and “saw an ad that a broker was listing it. I told him that I had been interested in buying it long before it was listed.”

It took him several more years to close the deal.

“I ended up buying it in 2000, so probably seven years had passed since I first looked at it,” Zeppelin said. 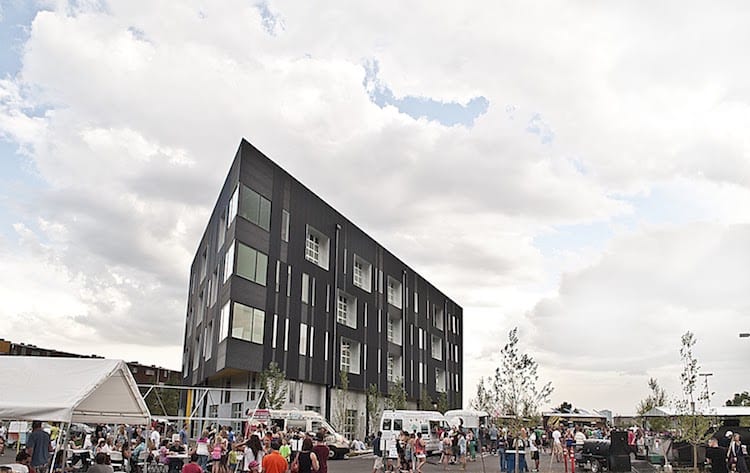 Taxi is a hopping place in RiNo.

“I don’t remember what we paid for it, but I remember it was $6 per square foot for six acres,” which is about $1.6 million. “Six dollars per sf seemed pretty cheap.”

The building’s hallways were actually interior streets, as cabbies use to drive their vehicles in the building to have them serviced and to grab tickets when they were heading out to pick up passengers.

At the time, not many saw the building and the site as a place where people would want to live and work.

“Before we bought it, it was being marketed solely for industrial use,” Zeppelin said. 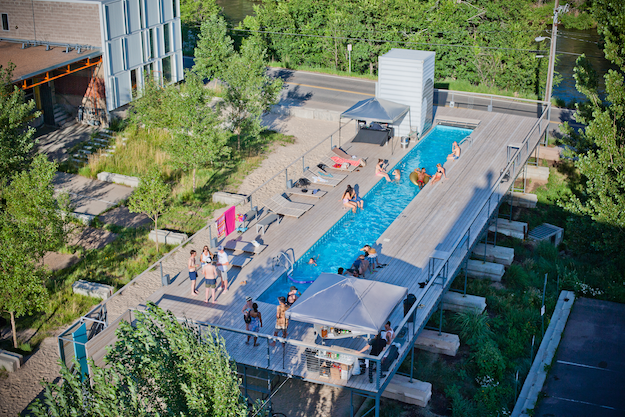 Residents at Taxi enjoy its swimming pool. Mickey Zeppelin’s vision for Taxi called for a place where people can live, work and play,

Like an antihero in a movie, Zeppelin saw the building and the site as kind of antitraditional office space.

A core tenet of Zeppelin’s development creed is to “always start with, ‘What do people need?’ rather than the buildings themselves.”

In the early days of Taxi, the residential real estate market was “really hot” and people were spending a lot of money to make their homes luxurious.

“Then, you looked at the office market and people were caged in these cubicles,” Zeppelin said. “We came up with this idea of kind of an alternative workplace space.”

In fact, at the grand opening of Taxi in August 2001, they shot off fireworks, and burned and crushed a mock cubicle space that included a mannequin sitting at his sterile space.

Today, there are plenty examples of Taxi-like space.

“Taxi is what Google is doing with its office space and WeWork is doing,” Zeppelin said. 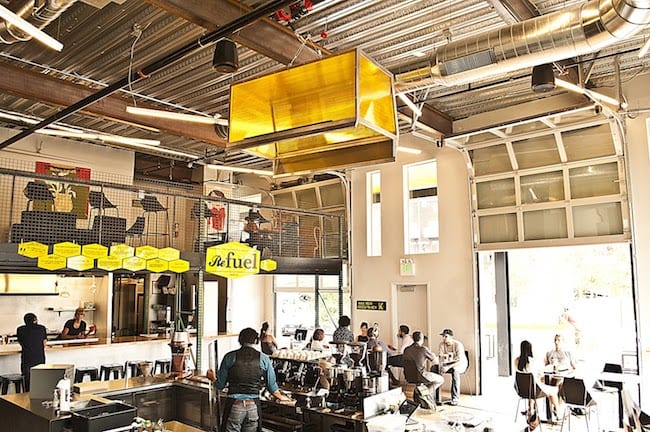 Food has always been an important element at Taxi. Fuel Cafe has been replaced by Comal.

At the time of Taxi’s birth, he had heard about a similar place in Boulder, although he doesn’t think he ever stepped into it.

“And these kind of gritty redevelopments were going on in Europe at the time,” he said.

Since Taxi got off the ground, it has grown to about 24 acres and hundreds of thousands of sf of space. Taxi not only includes office space but also the Openair Academy day care center, Comal restaurant, Black Black Coffee, and for-sale and rental housing. Mickey, with his son Kyle, are working on  200 units of affordable housing on the site.

Since he launched Taxi, he and Kyle have expanded their footprint in RiNo outside of the boundaries of Taxi to include the Source, the Source Hotel that opens in June and Zeppelin Station at a light-rail stop.

In recent years, Taxi has had such a cachet that new office space typically is all spoken for months before construction is complete.

“People are always asking me if I ever dreamed it was going to turn out this way,” Zeppelin said.

Given that it was next to the Platte River and that the site was such a straight shot to downtown, “I always felt Taxi would be a catalytic thing” that would lead to more development in the area.

At the same time, he hasn’t been thrilled with much of the development in the area and on the drawing board. 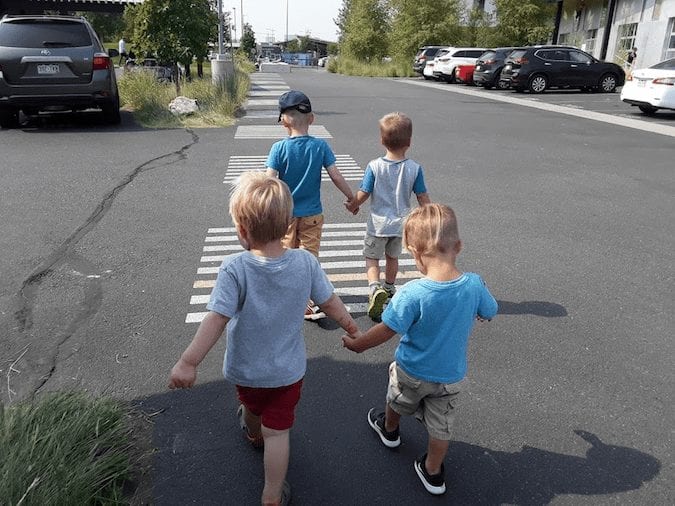 Taxi is a place for people of all ages. These children attend daycare at Taxi.

“I see it like the growing of a city,” Zeppelin said. “That is, it is not all good. I hoped for, and I thought, we would see better design. I thought we would see more of the grittiness incorporated into the design of the buildings. A lot of the architecture is really generic. And I never thought land in RiNo would be zoned for 18-story buildings.”

While Zeppelin’s legacy at Taxi likely will withstand the test of time, he’s not sure much of what followed in his wake will.

Too many developers, he said, “are embracing the old Western value of exploitation, rather than innovation.”

And that is disappointing to him.

“I thought more people (with their developments) would pick up on the character of the area and the vision I had with Taxi.”