TCA by E*Trade has several years remaining on its lease at 7103 S. Revere Parkway in Centennial.

A longtime investor in the Denver market bought the TCA by E*Trade building in Centennial for $16.9 million, or $289.36 per square foot.

TCA by E*Trade is a registered investment adviser owned by E*Trade Financial Corp., which is listed on the Nasdaq Stock Market. The company is a year into a 10-year lease for the property.

Interest in owning the office/ flex building came from real estate investment trusts, real estate funds and private investors across the country, according to Calbert. 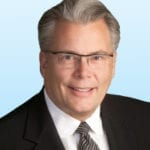 “We had institutional and noninstitutional interest from people on the East Coast all the way to the West Coast and beyond” due to the strong tenant credit and “predictable income stream,” he said.

Watumull Properties Corp. owns numerous other properties, predominantly industrial and flex assets, in the Denver area. “They have been investors here for over 20 years, understand the market and view this as a good income stream in an infill location,” Calbert commented.

The TCA by E*Trade building was constructed in 1983 and expanded a few years later.