The ripple effect of a center’s creative turnaround

The Market at Spring Creek had professional murals painted on the backside of the retail center to make it more attractive, active and inviting to its neighbors. 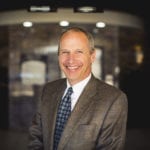 When a retail center loses a major anchor, there is a ripple effect that goes well beyond the closed doors of the big-box space. It spreads to the in-line retailers, the nearby retail centers, the owner’s own pocketbook and the community as a whole. That was the case with The Market at Spring Creek, a 107,310-square-foot retail center in Colorado Springs. Located at South Circle Drive and Monterey Road in a neighborhood in transition, the 30-year-old center lost the Cubs Food Store it was originally built for in 1988.

The real estate investment trust that purchased The Market at Spring Creek in 2012 for $7 million saw the investment quickly losing value to the point the trust sold it for only $2.8 million in 2019. Not only did the retail center and REIT suffer, but the community did as well. The entire center had fallen into a state of disrepair and empty retail spaces, turning it into more of a gathering place for the homeless than a shopping destination. A further stain on the center was the fact that the parking lot had become a “pit stop” for street car racers who would hold drag races up and down the nearby boulevard. It wasn’t a great situation for anyone, including the new buyer, Western Centers.

Upon purchasing The Market at Spring Creek, the center was 75% occupied and was losing tenants each month. The 65,000-sf former Cub Foods space was being leased to a shipping and distribution company, but that user was paying minimal rent and only had a dozen employees working on the site from 9 a.m. until 5 p.m., which did little to increase shopper traffic for the in-line retailers. Further complicating the issue was the fact that the company decided to renew its lease for another five years soon after the property had been purchased.

While the original intent of the purchase was as a long-term investment, the new ownership team had a dilemma on their hands. The team had to figure out ways to turnaround the image of the center so it could overcome its existing stigma of being nothing more than a hodgepodge of empty retail spaces and a parking lot that had become home to a less-than-desirable element for a community retail center.

The creative approach and thoughtful solutions provided a case study that might be applicable to other retail centers with empty anchor space that is creating a negative trickle-down effect.

Ridding the site. Among the first steps the new ownership team took was working with local law enforcement officials to eliminate the loiterers and undesirable activity from the site. The local police were more than accommodating when approached. A simple no trespassing letter and direction from the new owner stating that no activity was approved without notice to local law enforcement. With this active, hands-on approach it quickly became evident that this was not the place to come hang out and cause trouble.

Cosmetic and structural improvements. The ownership team immediately invested in cosmetic and structural improvements. This included repairs to damaged sections of the parking lot, adding LED lighting and repainting the buildings. The team even went to the extent of having murals professionally painted on the backside of the retail center, to make it more active, alive and inviting to its neighbors who had previously only been greeted by old, dirty walls. These efforts brightened up the center and proved to local officials and the surrounding community that the owners were serious about turning things around, which created the beginning of a new, much more positive ripple effect.

Creative solutions. With the entire site cleaned up and restored, the ownership team knew it had to take things a step further in order to bring people into the site and continue to forge a new relationship with the community. One of the first solutions was to start a “Food Truck Friday” event, with as many as 10 food trucks on the site. Word quickly got out about the event, and neighbors and people working at nearby business began showing up like clockwork every Friday. The number of visitors quickly spilled over into the existing Subway sandwich shop and drive-thru Mexican restaurant. In addition to the food trucks, the owners added compelling artwork and sculptures to the site that helped to make the retail center all the more inviting, and hosted special events for the community, including a summer weekend festival and a holiday party with Santa. 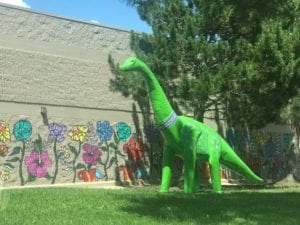 When one of the newly added sculptures was stolen from the center,
ownership created a social media campaign that soon went viral.
It paid off – the missing dinosaur was returned.

Missing dinosaur. As the saying goes, money can’t buy great press coverage, and The Market at Spring Creek benefitted unexpectedly when one of the sculptures – a green Brontosaurus – was stolen from the site. Rather than simply report the matter to police, the ownership team smartly developed a press strategy that included an announcement about the “Missing Dinosaur” and a $500 reward for its safe return. Not only did the Colorado Springs media gobble up the news, but it spread to Denver and even hit national news outlets. The Market at Spring Creek was suddenly a media darling and quickly became an even more desirable place to check out.

Since the purchase of The Market at Spring Creek and the implementation of ideas, the retail center has only one vacancy and has begun to turn around. There is still a long way to go until the large space can be returned to retail use, but with creative energy the center will thrive in years to come.