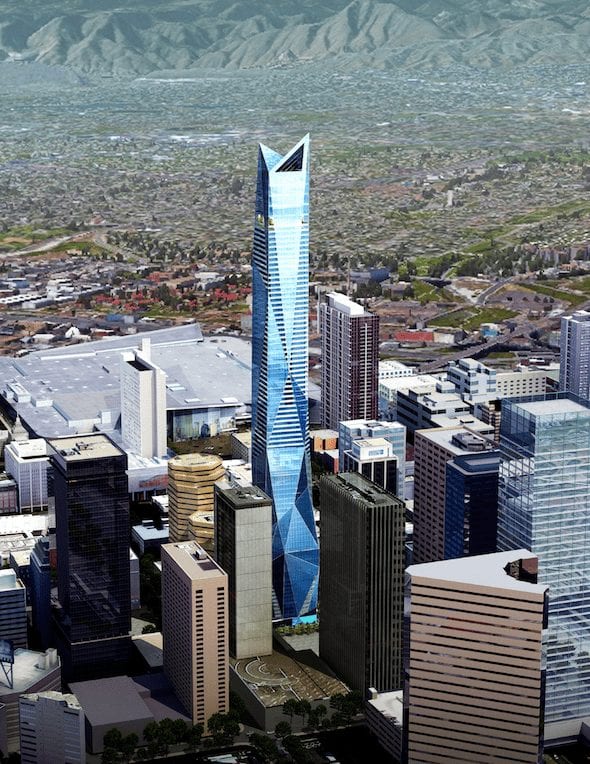 I first started talking to New York City-based developer Mike Ursini last March about his plans to build the tallest building in Colorado.

Our agreement was that by sitting on his blockbuster $400 million development at 650 17th St., he would give the story to me first.

Six months later, it didn’t work out that way, as word leaked out and the proposed iconic tower made headlines and fueled speculation whether it would ever get off the ground.

“Making a reporter happy is not at the top of my list,” Ursini told me in a lengthy and wide-ranging phone interview Friday.

And, in fairness to him, he didn’t want to be talking to the press last week about the tower in the heart of the central business district. 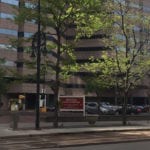 Shown is the parking lot that Mike Ursini’s firm has under contract. I took this photo last spring, after I first spoke with Ursini.

Indeed, he had nothing good to say about the media coverage to date.

“The blood-sucking media was irresponsible in its reporting, didn’t do its due diligence and got things wrong. I want to clear the record by saying that while we have met and worked with (the city), we never filed a formal application. The media confused us with another project that is upside-down.” 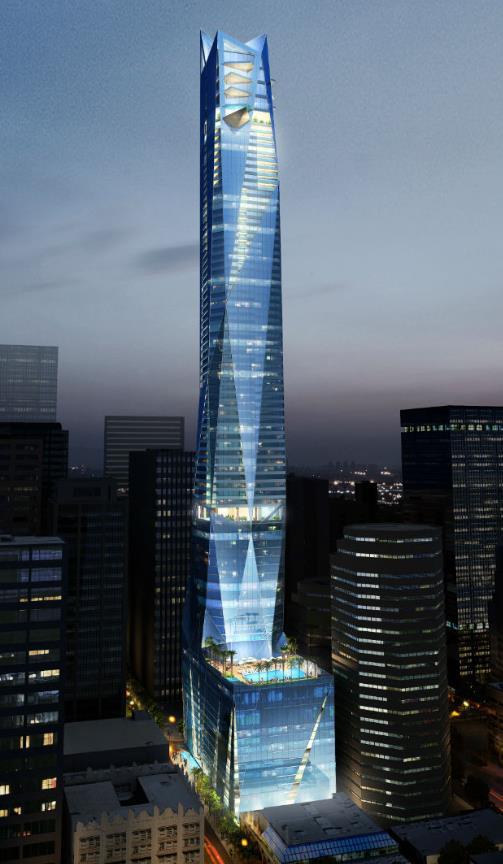 Another look at 1650 17th., which would be the tallest building in Colorado.

I told him he sounded like another New York developer who is no fan of the press. And not to be coy, I asked him if he knows President Donald Trump.

“I know him. I like him. He’s a good guy. That’s not to say I agree with all of his policies. But I’m not a politicized guy. I like to talk about stuff I know about.”

And what he knows about is commercial real estate.

The tower, he told me, would be about 1,000 feet tall and have in the neighborhood of 75-90 stories, depending on the height between the floor and ceiling. For example, an atrium area might be as tall as five stories, but only counts as one story.

He told me he cannot imagine anything that would stop him from developing the high-rise with 1 million square feet-plus on land he is buying from Paradise Land Co., owned by Buzz Geller.

“Why would you even ask me that?” Ursini responded. 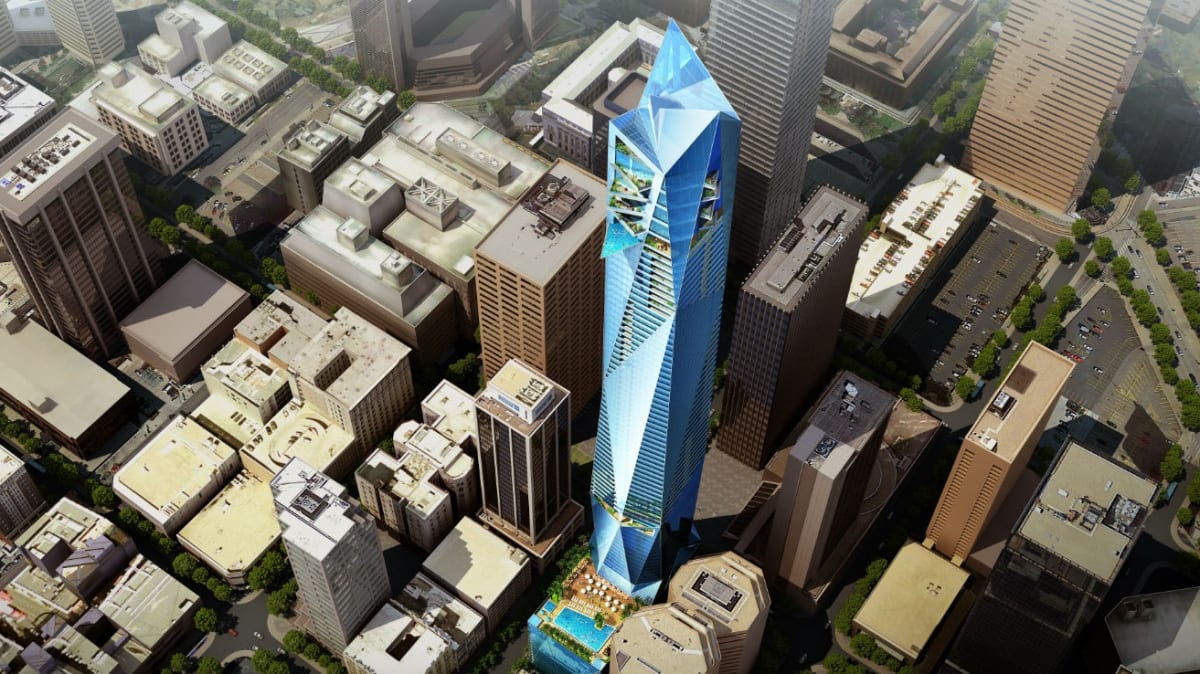 Another preliminary drawing of the 1650 17th St. tower that Mike Ursini plans to develop in the heart of downtown Denver.

Preliminary plans are for 284 residential units, a hotel, 22,000 sf of retail and 500 parking space to be developed by his privately held firm, Greenwich Realty Capital. The tower would be by far the largest single undertaking by Greenwich.

Although last week’s press release said the tower would have luxury condo units, he is studying whether apartment units would make more sense. He also is analyzing whether it will include a hotel, given how many hotel rooms have recently flooded the market. He does like the hotel idea, however, because it would make it a more public building.

He wouldn’t discuss the size of units, or rents or potential sale prices, noting it will take three years to build it and the building will respond to market conditions at the time.

One thing he is sure about is “it will not have an office component,” he said.

While media reports last week pointing out that Greenwich hasn’t filed any plans with the city yet really ticked off Ursini, he did tell me he may seek a zoning change to allow larger floor plates and would like to vacate the alley on the site to help achieve that objective. 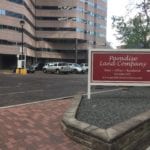 I asked him if he worries that a tall, skinny building would sway in the wind.

“We’ve hired the best engineering firm in the country, Thornton Tomasetti; this building won’t be swaying in the wind,” Ursini said.

He also said that he has plenty of options for financing the building.

“Money won’t be an issue,” Ursini said. “We have all of our capital stacks in place.”

At least one person locally speculated online that the building would be funded by money from the United Arab Emirates.

Ursini said that is not true.

“I tell you where that rumor came from,” he said. He said that Carlos Ott, an architect on the tower, has designed a number of buildings in the UAE and gave a shout out to Denver tower at a meeting with financers from the Middle Eastern country. However, that money is for a different development by Greenwich.

”Our direction to Carlos in that his architectural design for 650 17th should reflect (Denver’s) unique lifestyle and elevate it,” said Stephen Drew, who along with Ursini is a co-founder and managing partner of Greenwich Realty Capital.

Denver-based Davis Partnership Architects is the architect of record and New York City-based Crown Architecture and Consulting is the executive architect and owner’s representative.

Shown is a hotel in Dubai, in the UAE, designed by Carlos Ott.

I asked veteran Denver developer George Thorn if he thought the building would get off the ground.

“Who knows?” Thorn replied, noting that there is a huge pent-up demand for condos in Denver, and with 248 units, other, larger condo projects, such as the Coloradan, are enjoying brisk sales.

He added that condos on the heart of 17th Street would be “pioneering,” as 17th Street is an established office corridor, while condos tend to be found near Union Station, LoDo and nearby neighborhoods like the Golden Triangle and, most recently, Sloan’s Lake. 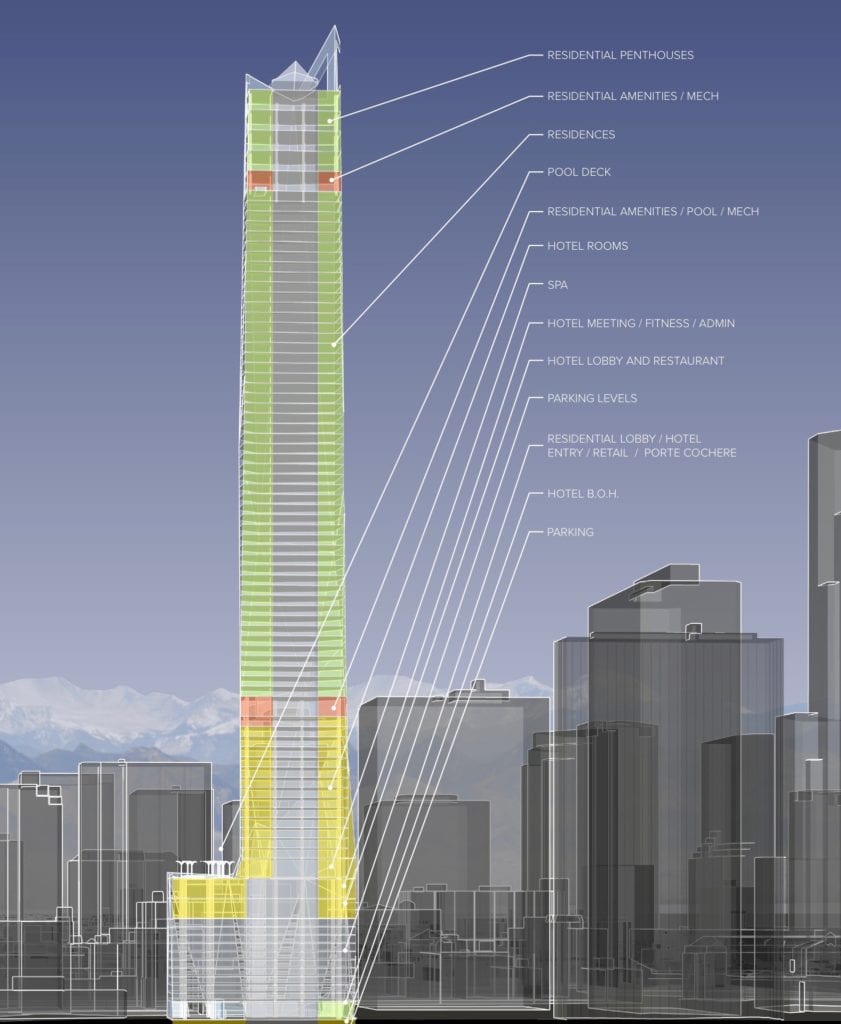 A preliminary look, subject to change, of a potential breakdown of the proposed tower at 650 17th St. Source: Crown Architecture and Consulting

Another prominent developer, who talked to me on the condition that I did not use his name,  was even more skeptical.

“I see this in the category of I will believe it when I see it,” the developer said, adding that he thinks that would be the consensus of most developers with track records in Denver.

“But what worries me, even more, is that I see this symbolic of the end of this boom cycle,” he added. “I’m very dubious that we will see a big project like this built this late in the cycle.”

The true test of the viability of 650 17th St., as with all big development, is when the construction financing is secured, another developer I know told me. This is developer has known Ursini for the past three years and is intimately familiar with 650 17th.

Ursini, for his part, has no time or tolerance for naysayers.

Not only does he swear that 650 17th St. is a go, but he plans to plant his flag elsewhere in Denver.

“I plan to do $1 billion in projects in Denver in the coming years,” Ursini told me “I don’t care what the media says. Reporters act like they know everything about development, when they know nothing. I plan to be in Denver for a long time.”