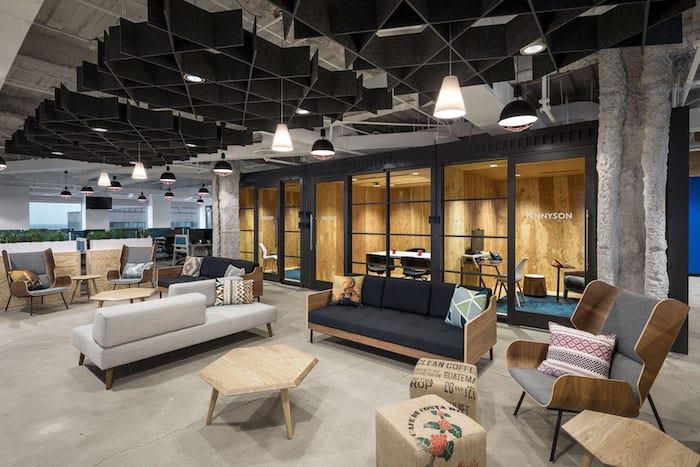 Venture Architecture, a Denver-based firm specializing in discovery-focused design and delivery, recently completed design for the space, located on the 29th floor in the Wells Fargo Center at 1700 Lincoln St.

“OpenTable has a distinct culture that is palpable in their new space,” said Martin Goldstein, principal at Venture. “We took what they love about the gritty warehouse aesthetic in the RiNo Art District and brought it into the central business district, delivering a blended concept that not only captures their culture, but can also evolve with them as they continue to grow.”

Designed to accommodate the needs of OpenTable’s 100-plus employees, Venture’s layout of the space features distinct areas for heads-down productivity as well as collaborating and socializing. The open concept areas provide ample access to natural light and sweeping views of downtown Denver and the Front Range. 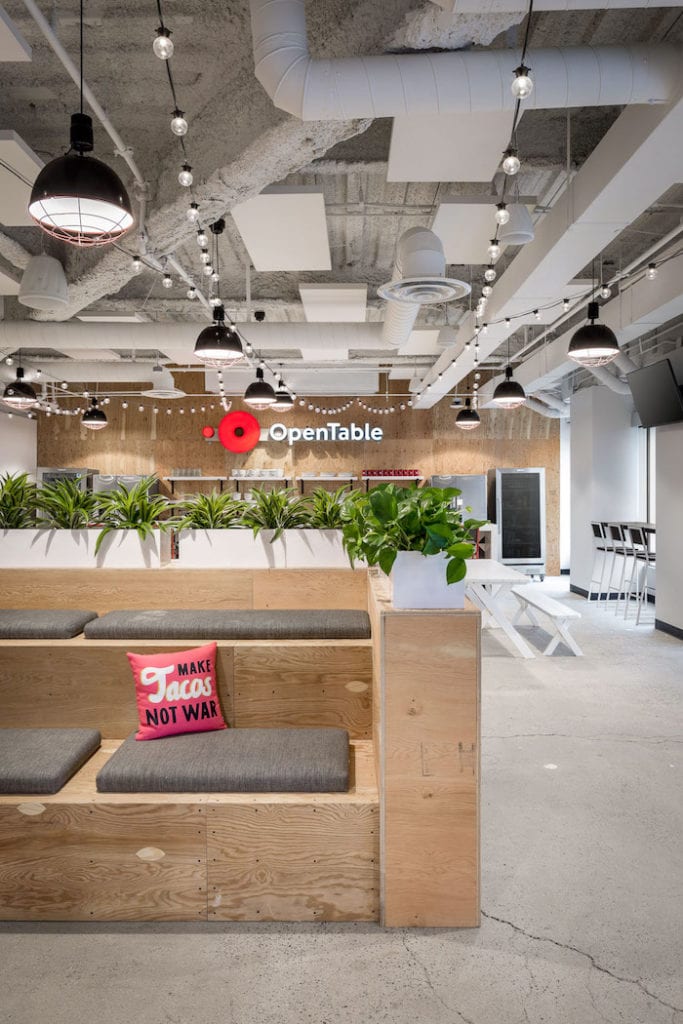 Raw plywood gives the custom-milled auditorium seating an industrial feel, which is further complemented by open, high ceilings and exposed ductwork. Planter boxes of greenery bring the outside in and help delineate distinct spaces.

To achieve a RiNo-inspired look and feel, custom millwork, including auditorium seating, huddle booths and phone booths, were crafted to complement the open, high ceilings, exposed ductwork and raw plywood found throughout the work areas, break room and library.

“From the beginning of the concept design scope, we contemplated shipping containers,” Goldstein said. “Almost as early, we knew that the cost to actually torch a real container apart and get it up to the 29th floor would be really expensive. As a value-minded team, we thought that we could re-create one close enough to make the design impact instead.”

The containers had to be more than decoration to be a successful component in the suite, said Goldstein.

“They had to add value. So we utilized the spaces inside each container to serve particular threads of the custom workplace strategy we crafted to suit the specific OpenTable team occupying the suite.”

In order to see in, but maintain acoustic privacy, the design called for the DIRTT Modular Wall System.

“We’ve successfully deployed it on several other projects where design, cost and high acoustics were important,” said Goldstein. “This project used slider doors with full, solid lines of glass, and opted to only split the fixed panes of glass for scale.”

“With the acoustics, cost, and aesthetics solved, we tapped our team at Apex Structural Engineers to help the containers stand up on their own,” Goldstein said. “Venture and Apex have an established team that is able to talk in shorthand. Using light-gauge framing, all readily available, we also avoided any impact to the schedule.”

This was the critical keystone to making the project the success it turned out to be, according to Goldstein.

Building on the RiNo aesthetic, AE Design worked with the team to design and specify a lighting system that met the design intent aesthetic of the architect’s vision, as well as the unique constraints of the existing building emergency and power systems.

“In order to bring the RiNo warehouse, gritty aesthetic into the more refined Uptown office setting, the lighting is made up of industrial light fixtures with protective wire guards that might be seen in a derelict old manufacturing plant,” said Jon Brooks, PE, IALD, LEED AP BD+C, CxA, principal, AE Design. “Intermixed with these rugged fixtures are refined, contemporary glass pendants, which provide just the right balance between the two design aesthetics. The lighting complements the interior finishes and furnishings, which have the same juxtaposition with exposed metal and plywood, complemented by sleek contemporary furniture resulting in a fully integrated design approach.”

“The biggest challenge to overcome doing a project in the central business district is disruption,” said Richard A. Cardone, LEED GA, president of IAI Construction. “We have to avoid disruption to the building operations and the tenant operations at the same time.

“The most vital thing that makes this all work is communication with all parties involved or impacted by the project,” Cardone said. “It comes down to the team working together to avoid disruption on the front end by communicating and evolving during the project.”