The upcoming Outlook conference will examine downtown, RiNo and the DIA area.

Richard W. Scharf Jr., as president and CEO of Visit Denver, the Convention and Visitor’s Bureau, is at the helm of a nonprofit sales and marketing arm that annually produces more than $500 million of direct economic growth to the Denver metro area.

During the past 26 years with the bureau, Scharf has had a bird’s-eye view of every aspect of every possible economic cycle.

“What I have seen over the years is that Denver does best when the three mixes doing well – the business traveler, your Monday through Thursday visitor; the leisure travelers who book hotel rooms during the weekends; and group business,” the hotel guru told Rebchook Real Estate Corner on Tuesday.

Firing on all cylinders

“I think we are kind of hitting on all cylinders right now,” Scharf said.

Scharf will provide his insights as one of the panelists addressing the outlook for downtown Denver at the upcoming 2019 Denver Commercial Real Estate Update & Outlook conference. 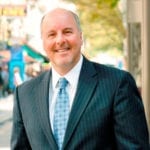 The conference is produced by the Colorado Real Estate Journal. It will be held immediately after the Multifamily Development & Investment conference, also produced by CREJ.

The Outlook conference’s Title Partner is FirstBank. Adam Sands, market president – Cherry Creek, FirstBank, will be one of the keynote speakers at the conference.

The hotel market, in Denver or elsewhere, does not perform in a vacuum.

“The hotel market is very tied to the office market and what is happening as far as economic development and job growth,” Scharf said.

The hospitality market in Denver, like the overall economy, also has benefitted from 11 added international flights at Denver International Airport, he said. The increased flights draw more business travelers and leisure travelers.

“Denver is now a global destination” for tourists, he noted.

And even with the additional 1,501 hotel rooms at the Gaylord Rockies Resort & Convention Center in Aurora, demand has been strong enough to absorb the increase in supply, he said.

Hotel demand is strong enough for the market to absorb the extra rooms at the Gaylord, according to Richard Scharf.

Showing the wide range of the speakers and topics at the Outlook Conference at the Hyatt Regency Aurora-Denver Conference Center, the Downtown Denver Update panel, in addition to Scharf, will include:

The Downtown Denver panel will be followed by a RiNo Update.

Members of the RiNo panel include:

The RiNo panel will be moderated by Peter Merrion – Senior Director, HFF.

Next up, Matt Sanman, the public information coordinator for Kiewit Infrastructure Co., will provide an update on the Interstate 70 reconstruction project. Sanman will be followed by Brad Buchanan, CEO of the National Western Center Authority. Buchanan will provide an update on the National Western Center area and the Triangle request for proposals.