This photo of Wynkoop Plaza at Union Station graced the cover of the Emerging Trends report. Photo credit: Ryan Dravitz.

Denver made the Top 10 list in the latest Emerging Trends in Real Estate 2019 report, which was released Wednesday.

Denver was ranked No. 8 of 79 metropolitan statistical areas in the comprehensive Emerging Trends report released by PwC US and the Urban Land Institute.

In the Rocky Mountain region, Denver ranked first of eight cities. The Dallas-Fort Worth area was ranked first.

The Emerging Trends report, in its 40thyear, is compiled based on interviews and surveys from almost 2,400 leaders in real estate. They include investors, fund managers, developers, property companies, lenders, brokers, advisers and consultants. 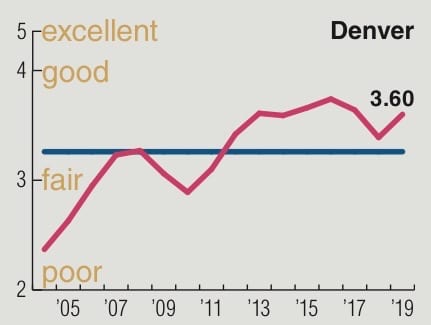 Market strengths of Denver, according to anonymous sources quoted in the report, include:

Denver, according to Emerging Trends, shares many of the same traits as other cities in the Mountain Region, including Salt Lake City, Phoenix, Las Vegas and Boise, Idaho. 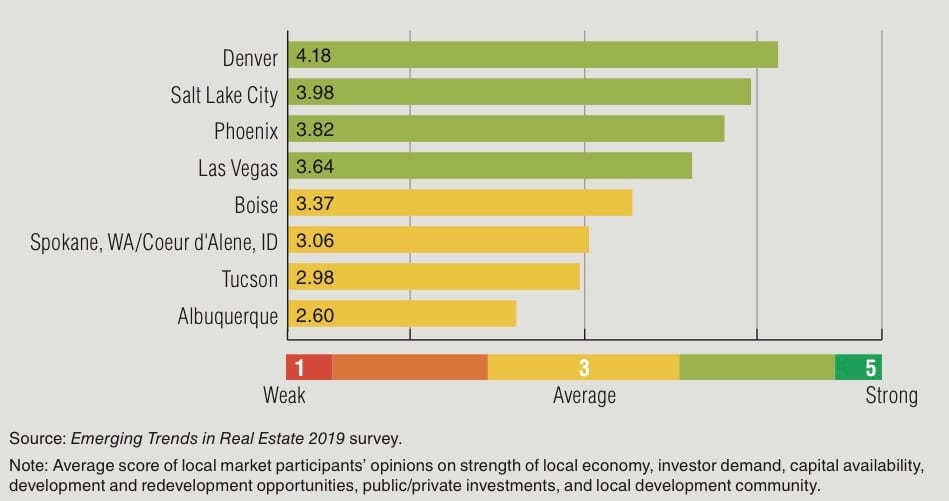 Denver was No. 1 in the Mountain Region. Source: Emerging Trends.

“The quality of life offered in the Mountain Region should continue to be attractive to millennials looking to start families,” according to the report.

The report went on to say that net migration is “particularly strong” in Denver, Phoenix and Las Vegas.

However, Denver is one of the few markets in the Mountain Region where housing is not affordable, putting Denver at a competitive disadvantage.

Other markets in the region remain relatively affordable, “although to some extent they have been victims of their own success,” according to Emerging Trends.

“Single-family home affordability in Denver is now below the national average, while affordability has trended down in Las Vegas and Phoenix,” according to the report.

Still, “Real estate development and investment activity is robust in all of the markets in the region. Phoenix, Denver and Salt Lake City report strong activity in nearly all property types,” according to the Emerging Trends report.

One cool thing about the Emerging Trends is that the cover photo of the report was of Wynkoop Plaza at Union Station. The photo was taken by Denver-based photographer Ryan Dravitz.