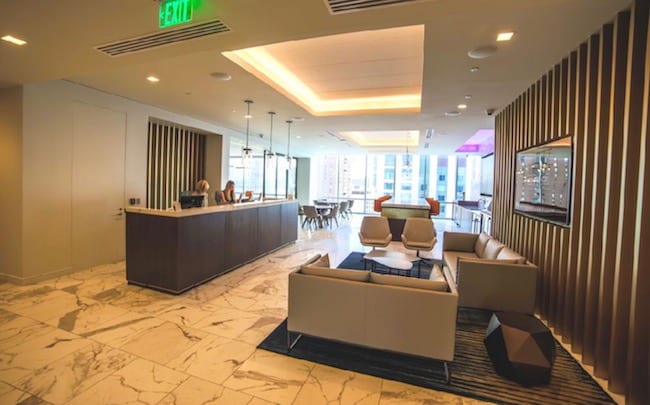 Welcome to Firmspace, luxury coworking space on the 16th floor of 1401 Lawrence.

Firmspace, a luxury coworking suite concept, with little fanfare planted it Denver flag on the entire 16th floor at the Class A office tower at 1401 Lawrence St.

“We opened in June without any premarketing or preleasing,” said Kristin Kirk, the hospitality director for Austin, Texas-based Firmspace.

Firmspace picked Denver as its first city outside of Austin for its concept after opening its flagship coworking space in Austin in 2017.

Coworking provides independent offices and shared workspaces. Unlike traditional offices, those in coworking space seldom are employed by the same company. 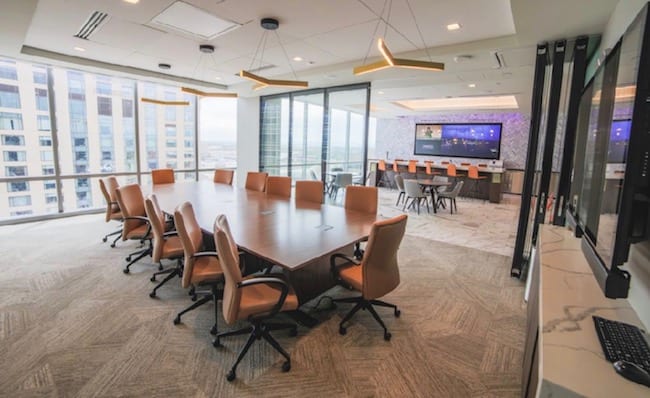 Firmspace has 150-plus offices available. The largest space can accommodate five people. Since the walls can be moved, it could accommodate even larger offices.

However, the vast majority of the individual offices are designed for one person.

She estimates that 10 percent of the offices have been leased, to date.

Office users include those in finance, commercial real estate, insurance and marketing. 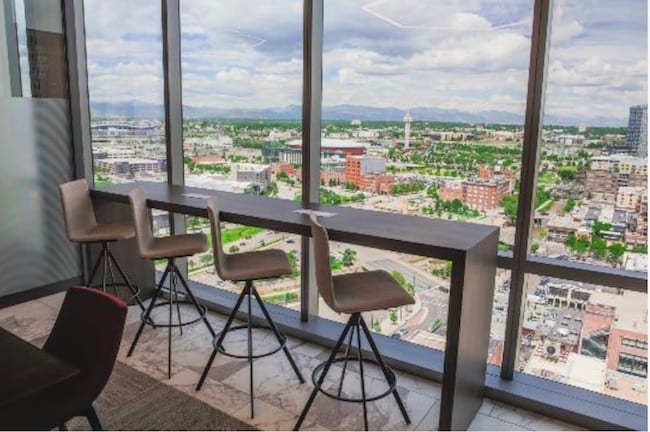 If you want to take a break from your office, this is one of the many places in the Firmspace coworking space where you can carry your laptop and work.

However, she said many, if not most of the tenants, work for “household” names, she said.

“Most of the people here work for companies with offices across the country,” according to Kirk.

The office space is bathed in natural light from floor-to-ceiling windows. Workers can carry their laptops to tables next to windows providing million-dollar views of downtown and beyond.

“I’m afraid if I worked at one of these spaces, I might spend all of my time admiring the view,” Kirk quipped. 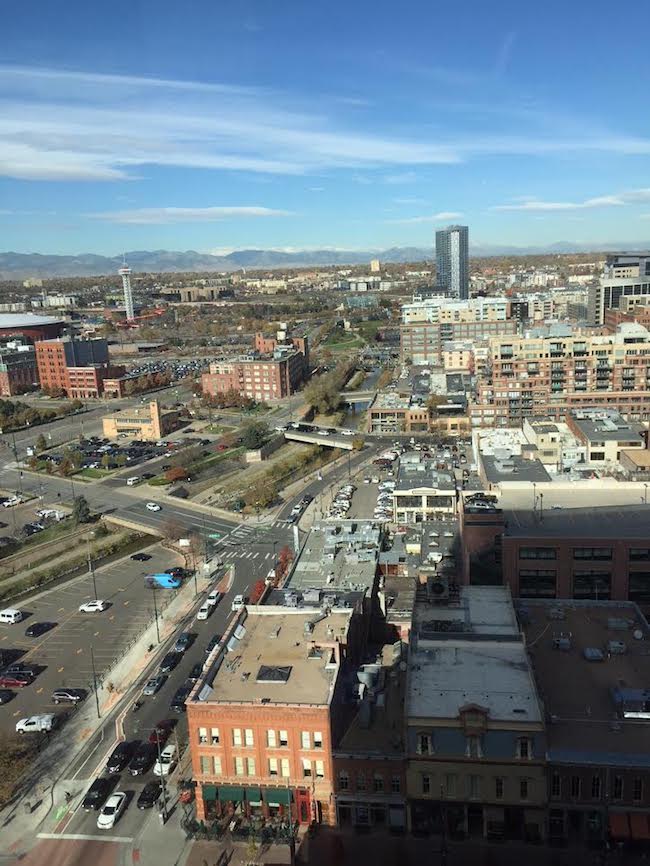 The view from the Firmspace coworking space at 1401 Lawrence

Each individual office incorporates sound-masking technology, so you don’t have to worry about overhearing a neighbor’s telephone conversation.

“You don’t feel like you are in a fishbowl, as you do in some coworking spaces,” Kirk said.

Firmspace doesn’t rent so-called “hot desks” that can be used by different tenants, as some coworking offices do. Firmspace offers “office licenses” for one month, six months or one year.

Firmspace provides three different-sized conference centers with cutting-edge video conferencing technology and café areas where people can get coffee, tea or complimentary gourmet snacks, and mingle and even collaborate with people from different companies.

“I do think a number of people working here have collaborated and networked with each other,” Kirk said.

A well-equipped workout area on the ninth floor of 1401 Lawrence is open to Firmspace members.

No shortage of coworking space in Denver

Coworking is a crowded space in the Denver-area office market.

The 800-pound gorilla in coworking, of course, is WeWork. WeWork provides space in five different buildings in Denver. It also provides offices across the U.S. and around the world. WeWork recently received a commitment for another $1 billion in financing from Japan’s Softbank.

In addition to WeWork, Denver coworking space is offered by Industry Denver, Shift Workspaces, Thrive Workplace, Galvanize, The Hive on 16th, Office Evolution, and the Grid Collaborative Workspace, to just tick off a few of the players in the coworking space.

Last year,  CBRE Research found 57 coworking leases with a total of 1.3 million square feet in the Denver and Boulder area. That number, a 62.5 percent increase from December 2016, has surely grown. 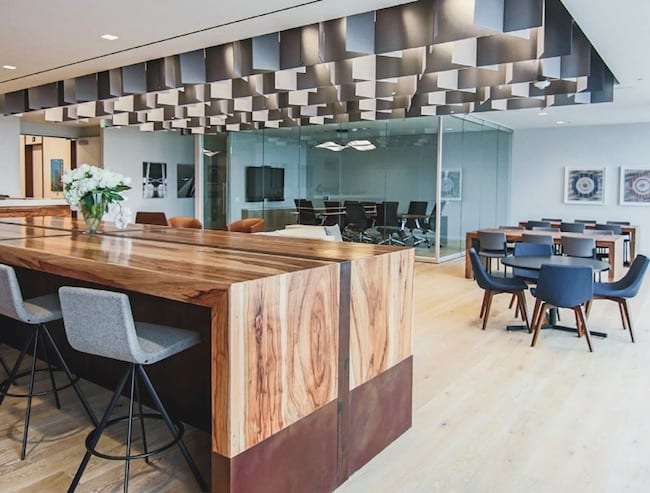 Firmspace has planted its Denver coworking flag at 1401 Lawrence.

This is what Matt Ferstler, co-founder and CEO at Firmspace, had to say about choosing Denver has its No. 2 location.

“We launched Firmspace to serve an unmet need in the coworking market. Many senior-level professionals and executives like the flexibility and convenience of coworking, but aren’t looking for a noisy, open-format workplace. Instead, they’re seeking a private, secure and luxurious space in which to achieve optimal productivity. Our Denver location meets that need, and then some.”

He went on to say that “Denver is an ideal location for our second national location. Like Austin, the home of our flagship office, Denver is a fast-growing and entrepreneurial city with enormous potential.”

She said she expects most of the people in the Firmspace office check out WeWork and other coworking spaces.

“We have a pretty sophisticated clientele and I’m sure they do their due diligence,” Kirk said.

“A lot of our members found us so far by word of mouth.”