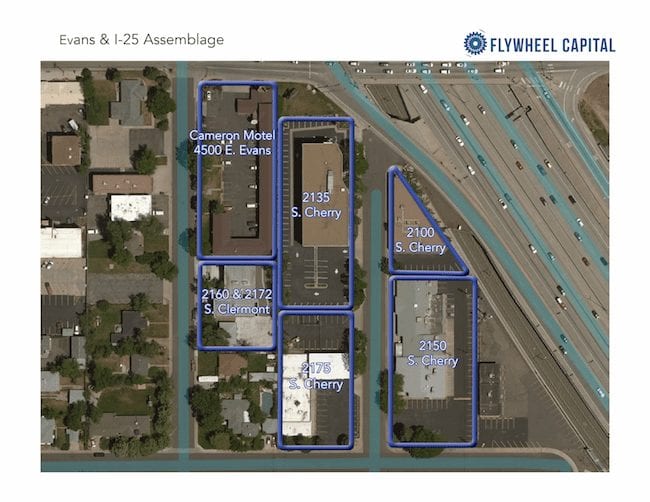 “It’s Main and Main,” said Ben Hrouda, founder and managing partner of Flywheel. In total, Flywheel and its development partners paid about $13.3 million for the site, according to public records.

Hrouda is a fourth-generation Coloradan who founded Flywheel in the summer of 2017 after being involved in more than $1.5 billion in commercial real estate transactions.

Before launching Flywheel, Hrouda served in senior roles at Denver-based Sage Hospitality and UDR Inc., the Highlands Ranch-based apartment real estate investment trust that has a market cap of about $12 billion.

“For us, it is all about the location,” added Adam Hazlett,  also a managing partner at Flywheel. 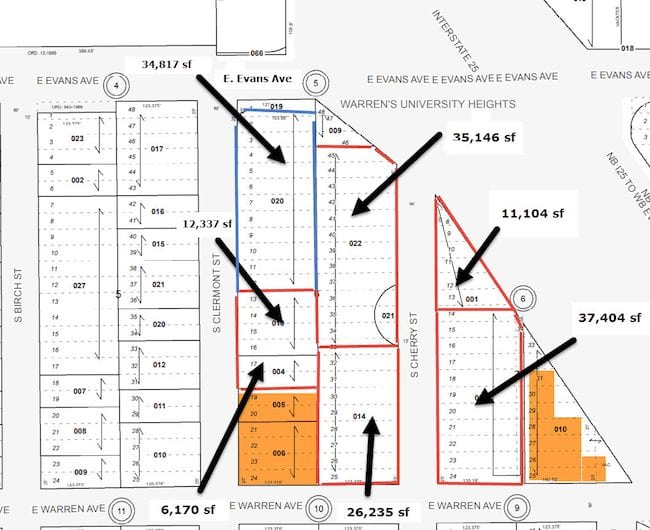 A look at the key assemblage along East Evans Avenue and Interstate 25 by Flywheel Capital. Image credit: John Winslow.

“We are agnostic about the product type,” continued Hazlett, who graduated from the U.S. Naval Academy in Annapolis, Maryland, and holds an MBA from the University of Pennsylvania.

“What we look for are diamonds in the rough,” said Hazlett, who was raised in Ohio and moved to Denver as a lifestyle choice and a place to raise his family.

“I moved here without knowing a soul,” Hazlett said.

Hazlett and Hrouda met when they both worked at Sage.

Flywheel assembles a gem of a site

Flywheel succeeded in assembling a gem with the Evans site, according to John Winslow.

“I’ve seen many assemblages over the past 40 years and this is one of the best I have seen,” said Winslow, who pens the Comp of the Day feature for the Colorado Real Estate Journal and has been a keen observer of the local commercial market as a broker and as a commercial real estate data guru.

‘’I’ve seen assemblages in the Golden Triangle on Lincoln Street and in LoDo and this is one of the most dynamic I have ever seen,” said Winslow, who was not involved in the deal and has not spoken to anyone at Flywheel regarding the purchase. “You just don’t find assemblages of this size along this corridor. This site is the heart of the South Colorado corridor. It is one of the best Denver sites in the whole metro area.”

When the site is developed by Flywheel, “It will change the landscape along the East Evans corridor forever,” Winslow said.

The average daily traffic count along East Evans in the area is 37,374 and about 50,000 along South Colorado Boulevard, according to CoStar.

The only downside to the site, in Winslow’s opinion, is that it is only zoned for five stories.

“I think maybe the new owners would want to seek a rezoning, possibly for 12 stories or more,” Winslow said. 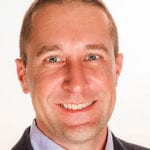 Tenants would have spectacular views from the site, as the elevation on the site is about 5,460 feet, according to Google Earth. For comparison, that is only 1.5 percent lower than the Veranda Highpointe apartment community. It’s called Highpointe because it is on one of the highest points of any apartment community in Denver.

The site is so key that “Fortune 500 companies looking to expand into the Denver market may look at this site as the ‘hallmark” for their corporate image,” Winslow said

A case can be made that more height is appropriate for the site, he said, noting the nearby Colorado Center, next to a light-rail station, includes tall office towers.

Hrouda said he considers Flywheel’s site as a transit-oriented development.

First phase to include apartments

Because the assemblage was completed so recently, all Hrouda and Hazlett know at this time is that development on the site will include apartments. They still need to flesh out specific plans and get permits for the development, a process that likely will mean construction would not begin for a year or so.

Sitting in Flywheel’s LoHi office last Friday, I asked them if they would consider a rezoning to bring more height to the site.

“We are looking at a lot of options and no option is off the table right now,” Hazlett said.

They have an architect in mind for the site, but they haven’t yet hired him, Hrouda said.

Hrouda kicked off the assemblage in 2016 when he was part of the group that bought the Cameron Motel at the southeast corner of South Clermont Street and East Evans Avenue for $3.73 million .

They have leased about two-thirds of the motel to the Colorado Coalition for the Homeless. 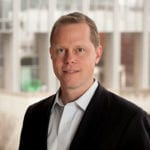 “The Colorado Coalition for the Homeless approached us and while a lot of developers would have looked in another direction, we heard what they had to say and saw value in building this relationship. We want to be good neighbors and part of the community,” Hazlett said.
The nonprofit group is on a month-to-month lease and would vacate the space when the site is redeveloped.

When Flywheel first bought the motel, it was thinking of that as a stand-alone investment and a redevelopment opportunity and not part of an assemblage.
“Then, we got to know our neighbors and the multiple owners of the nearby buildings,” many which became “quietly listed,” Hrouda said.

Because they were on the ground with the motel, Flywheel had the inside track on assembling the properties from multiple owners.

Bill Trinen of Trinen Realty Partners listed some of the properties that were owned by the estate of the late Tom Luinstra. Luinstra was the founder of Apartment Finders International.

Tony Oliver listed other properties on the site, including the former Jones Real Estate College building that has been home to the House Worship Church for the past two years, Winslow said.

Arguably, Denver’s real estate market is in the 1st or 2nd inning

I asked Hrouda and Hazlett the question that every real estate reporter is obligated to ask: Where are we in the real estate cycle.

“Everyone asks that,” Hrouda said, rolling his eyes.

“I hate that question,” Hazlett said.

Yet, they noted that they and their core investors in Flywheel have a great deal of faith in the short-term and long-term prospects for Denver and the Front Range.

“If you look at it through the right prism, you could argue that Denver is really in the first or second inning. We play a longer game,” Hazlett said. “But maybe you shouldn’t quote me on that.”

I responded that is actually a refreshing response, as opposed to the rote answer that Denver is probably in the 9th inning of an 11-inning game.

Of course, every inning is going to have its strikes and balls in addition to home runs and base hits.

Indeed, Flywheel takes its name from a “mechanical device that efficiently stores kinetic energy and smooths the operation of a reciprocating engine by maintaining a constant speed of rotation over the whole cycle,” according to the company’s website.

“A flywheel’s rotational energy is small at first, but momentum gains with each successive revolution, increasing and releasing kinetic energy. This concept is at the core of our investment platform philosophy. Our vision is to integrate this concept into our mission, approach, and relationships for the benefit of our investors and the broader community,” according to Flywheel’s website.