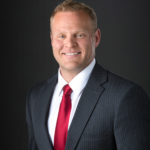 In 2019, not only was he awarded Rookie for the Year but Robson also won the Hoff & Leigh Red & White award, which is awarded to someone who exemplifies the company’s core values, incredible work ethic and the willingness to help others.